In general, humpbacks travel to sub-tropical areas during the winter to have their calves and mate. Four wintering areas were identified during the study, as shown  on the map below.

However, it appears that there may be an undocumented wintering area, since most of the humpbacks found around the Aleutian Islands in the summer were not seen at any of the identified wintering grounds. The main wintering area in the North Pacific is in the Hawaiian Islands, where almost 60% of the entire population is found.

Humpbacks tended to return to the same wintering and feeding grounds each year. This indicates that humpbacks have a strong affinity towards specific areas. Preliminary biopsy information from sampled humpbacks suggests that the inherited mitochondrial DNA from a whale’s mother could define the feeding/wintering areas that humpbacks frequent.

However, the study showed a small interchange of whales between the major wintering grounds. For instance, a few humpbacks were seen both in Hawaii and Mexico during separate winters.

In addition, if a humpback was at specific wintering areas, it moved freely from one sub area to another. For instance, a known humpback could have been seen off the Maui coast in Hawaii, then may have moved to Kauai or to the big island of Hawaii.

Summer Feeding Areas
In general, humpbacks migrate to the northern latitudes to take advantage of the summer plankton bloom and the  abundance of small fish. Humpbacks tend to remain within specific feeding areas (as shown below). In fact only 5% of the whales identified were re-sighted at different locations. 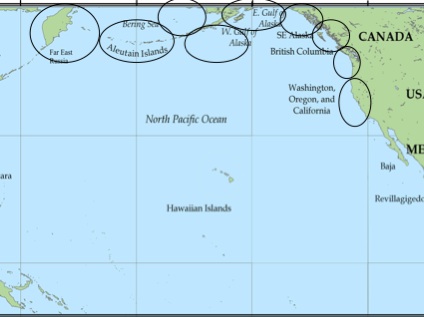 Humpback Migration
Data on humpback migrations between feeding and wintering areas was based upon 873 whales that were seen both at a wintering and feeding area. In general, whales that spent the winter in the Revillagigedo Islands (500 km SW of the tip of Baja, Mexico) and Hawaii migrated to the more northern latitude feeding areas. While whales found in coastal regions of Oregon and California migrated to mainland Mexico and Central America. 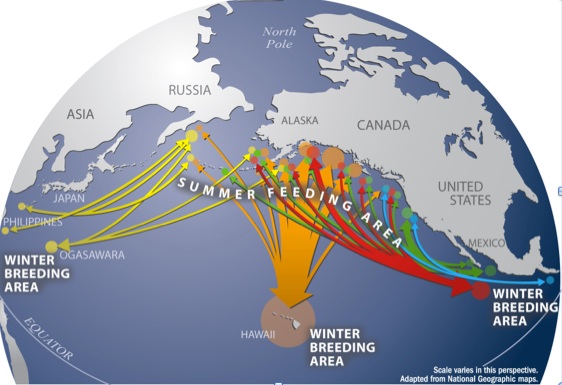 Unrelated to SPLASH were the discoveries of Antarctic humpbacks crossing the equator and migrating to Central America. Humpbacks from the Southern Hemisphere are using Central America  as a breeding ground from July to October. Northern and Southern Hemisphere whales were believed to be genetically isolated, but this does not appear to be the case. One such humpback was photographed in  Southwind Passage, Antarctic Peninsula in January ’95 and was subsequently seen off Costa Rica in September ’95 with a calf. The minimum distance the whale traveled was 8407 km, a new humpback migration record! 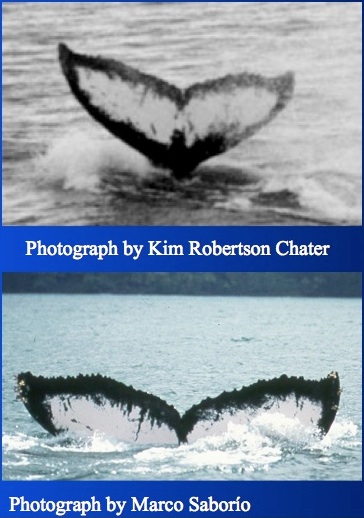