Part of our ongoing work in Hawai‘i is an effort to collect and identify floating dead cephalopods (squid or octopus) that we find during our field efforts, with the goal of determining which species are available and potential prey for cetaceans and seabirds. Many of the specimens we find are likely brought up to the surface by deep-diving cetaceans, including beaked whales, short-finned pilot whales, sperm whales, and dwarf and pygmy sperm whales, occasionally evidenced by tooth rakes or tears on the animal. We often find these cephalopods using the presence of scavenging birds, but occasionally they are just spotted in the water next to the boat, or sometimes in association with encounters with deep divers. We also obtain specimens from citizen science contributors — other boaters who find and collect specimens for the study. All the specimens are sent to William Walker at the Marine Mammal Laboratory in Seattle, Washington, for identification and for preservation of samples, which may be used at a later time for studies of population genetics or examination of trophic ecology. Some of the results on this work in relation to cephalopods and seabirds have been presented as a poster at a conference of the Pacific Seabird Group.

Since we first started collecting cephalopods in 2006 we’ve collected over 130 specimens of more than 20 different species, and have also received dozens of specimens for this study from boaters who have found them and contributed them. Almost all (>120) have been collected off Hawai‘i Island – only 10 have been collected elsewhere (1 off Kaua‘i, 1 off Lãna‘i, and 8 off O‘ahu). This is likely due to the much deeper water found closer to shore off Hawai‘i Island, but also reflects that deep-divers like beaked whales, short-finned pilot whales and dwarf sperm whales are resident off that island.

If you find any floating dead squid or octopus carcasses, we would value their contribution to our research! Any squid or octopus found should be collected and placed on ice or frozen. Once collected, call Robin Baird at 425-879-0360 and we can arrange pickup (depending on the island) or shipping to the mainland. 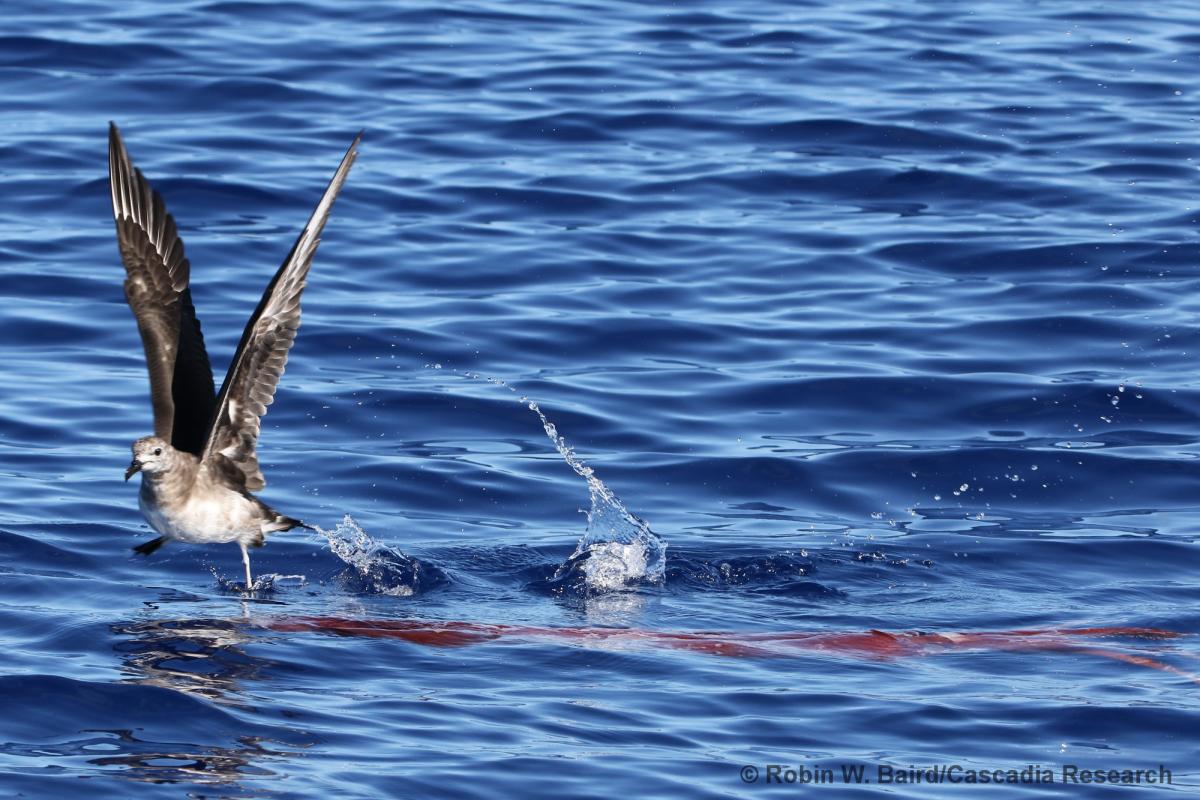 Above: A Kermadec Petrel takes off after scavenging on a specimen of Onykia sp. A, an as yet undescribed deep-water species.

The species we’ve documented in Hawai’i are listed below – click on a name for photos of each species (we are still adding some species) – all photos are taken in Hawaiian waters: 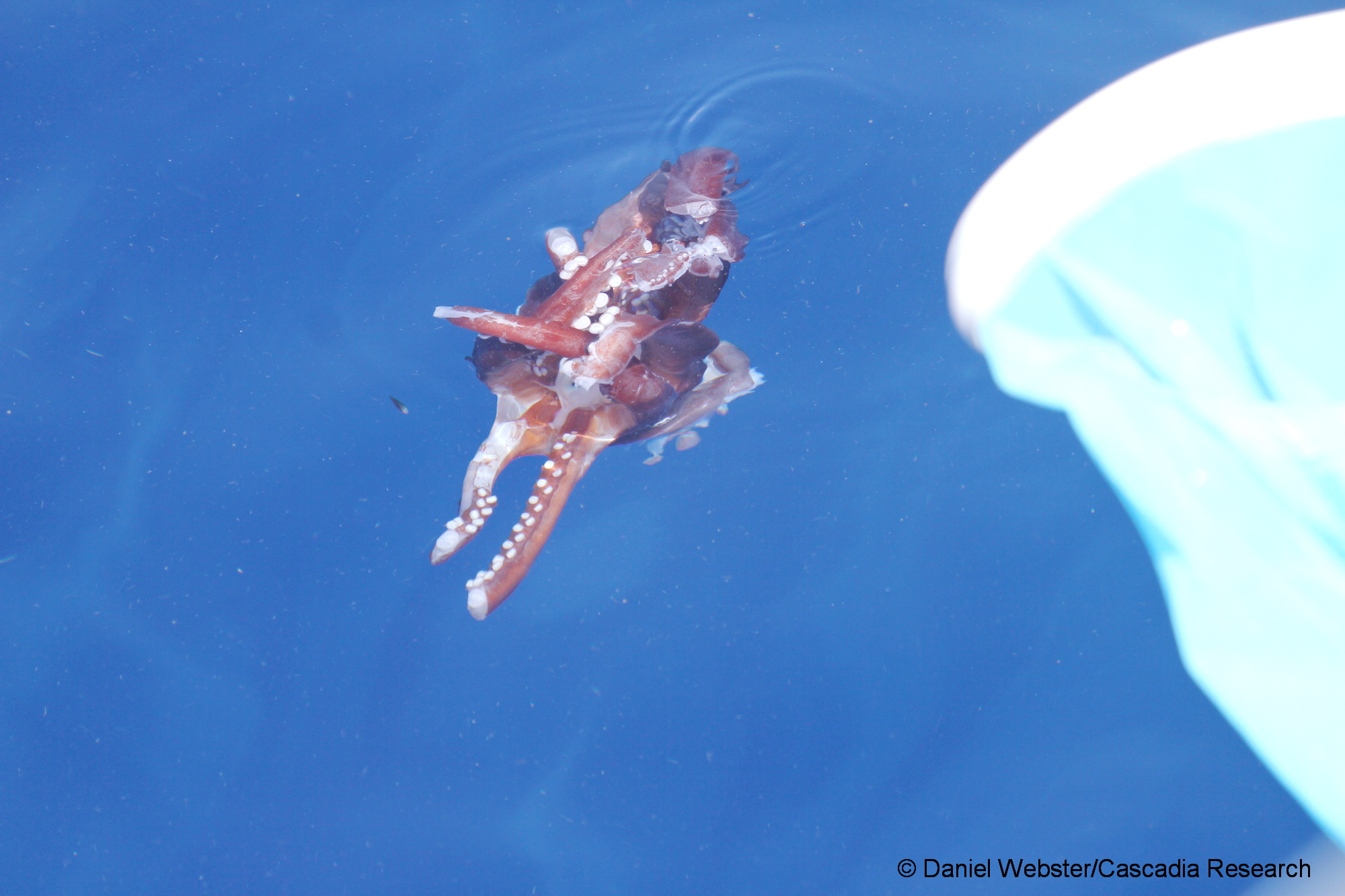 Cycloteuthis sirventi is one of the more common species we’ve found, having collected a dozen specimens between 2008 and 2017. This species is known to be consumed by melon-headed whales, pygmy killer whales, and Cuvier’s beaked whales (West et al. 2009, 2017, 2018). 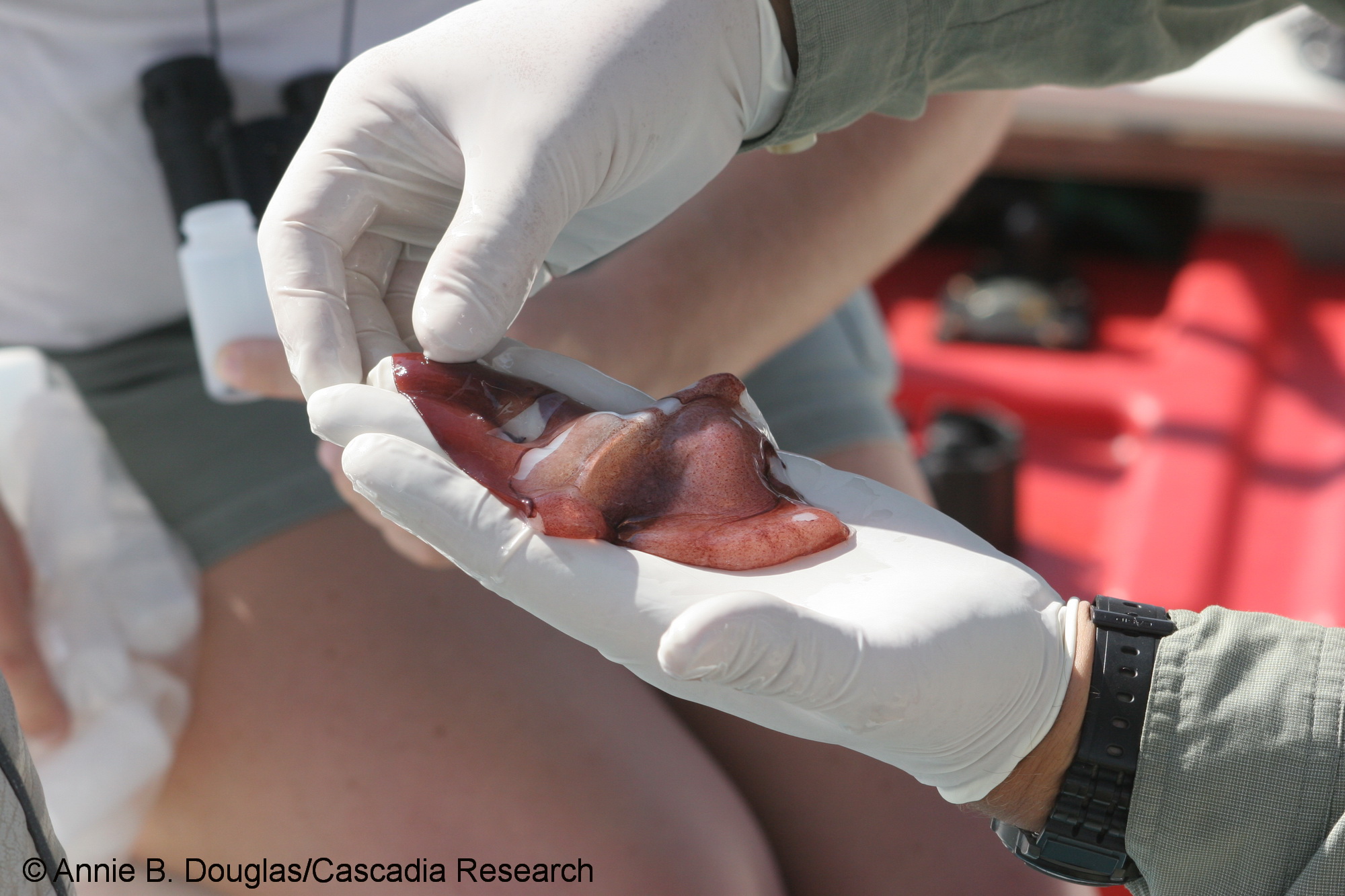 We’ve only collected one Discoteuthis laciniosa in the past, in November 2006. 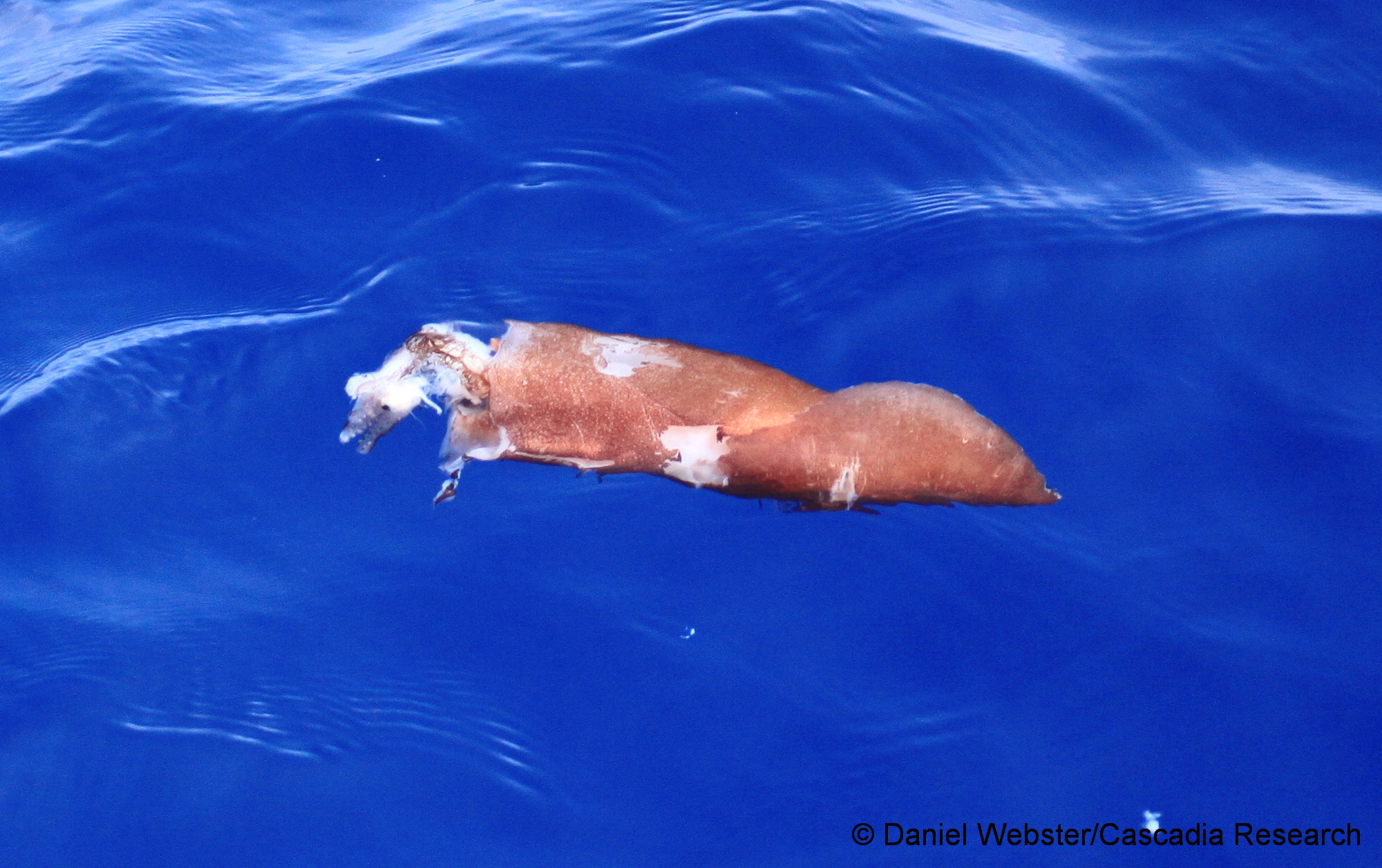 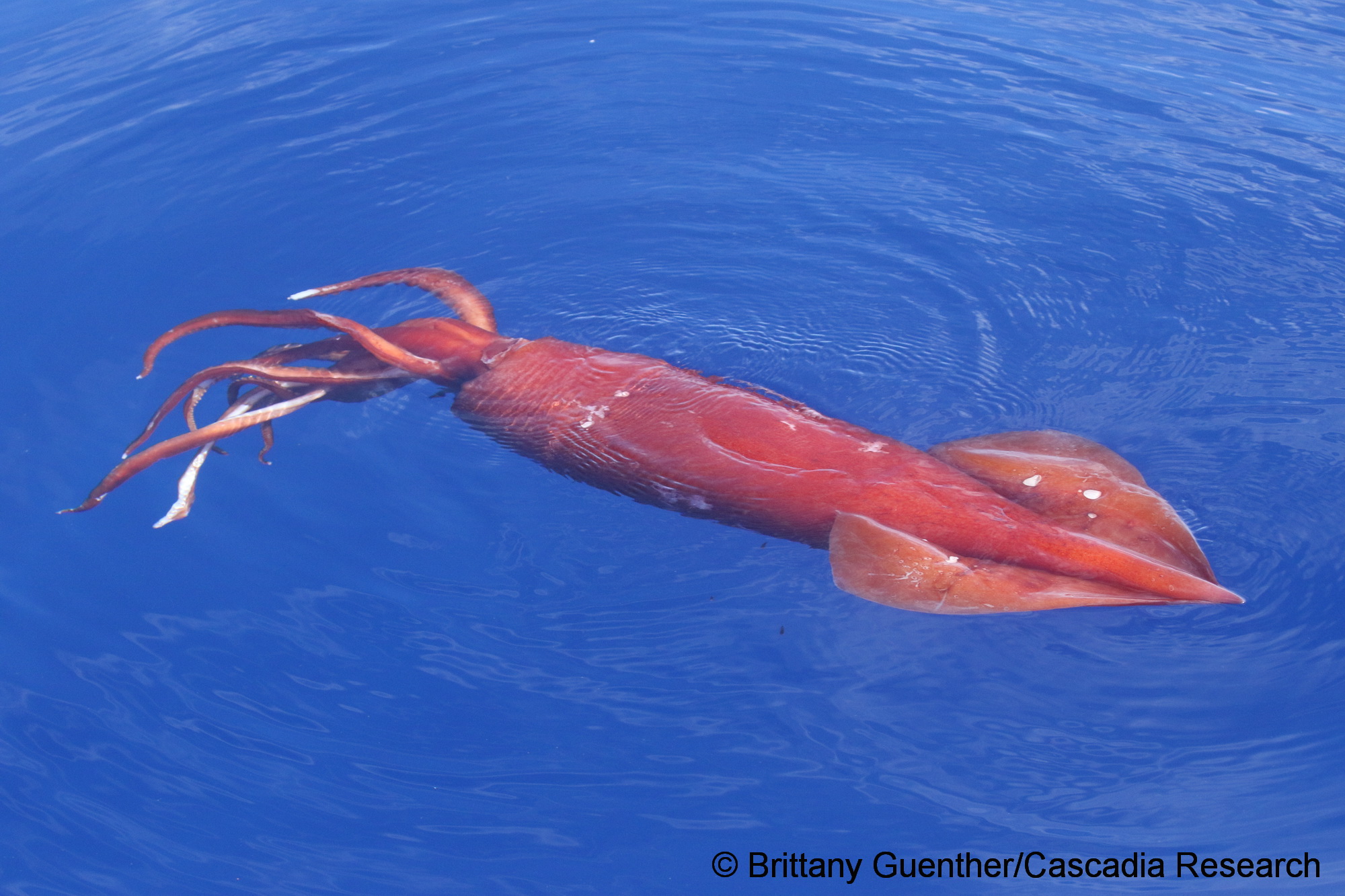 Onykia sp. A is an as-yet-undescribed species of Onykia. We’ve collected 11 specimens of this species over the years, including two in one day (in November 2019). 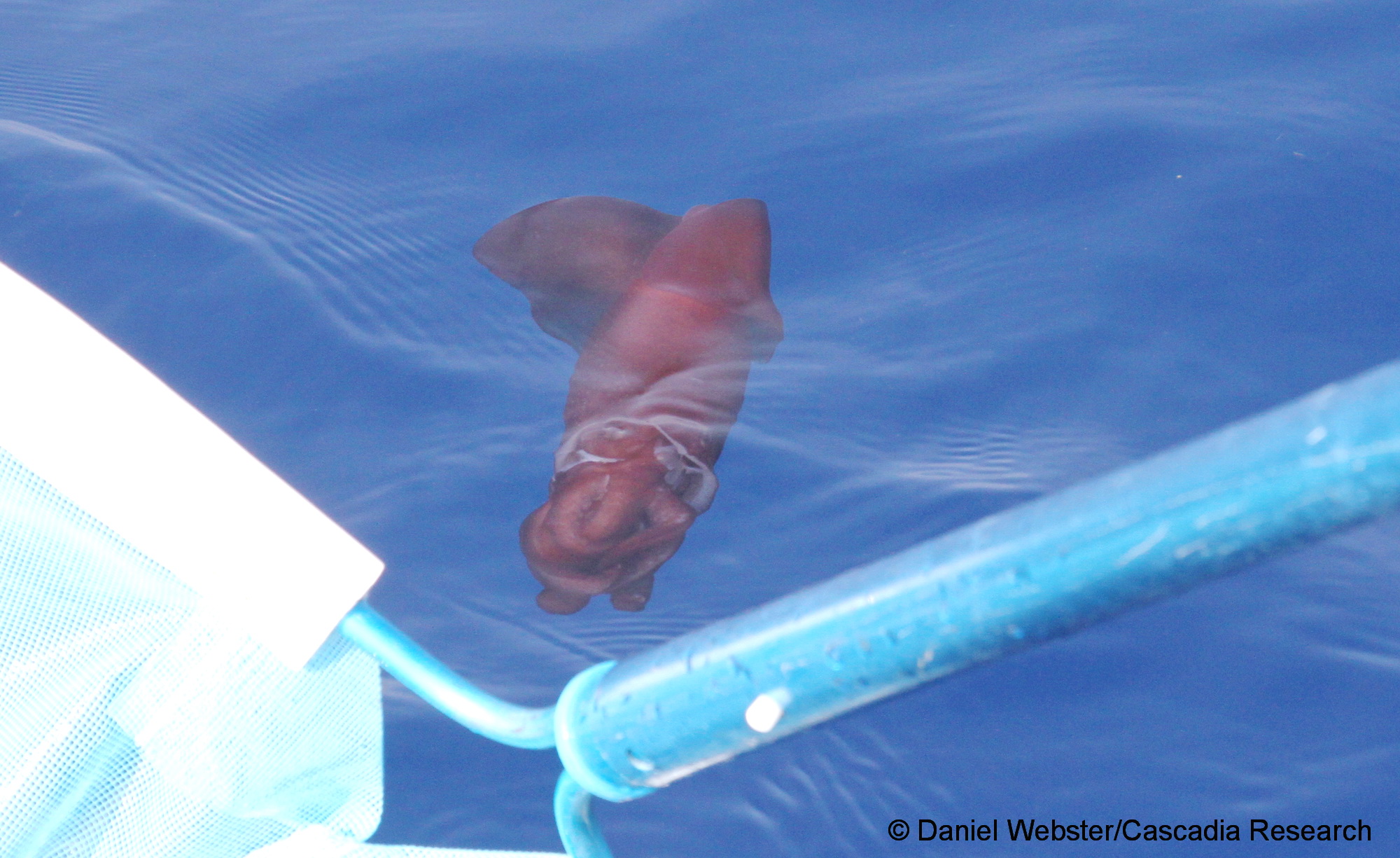 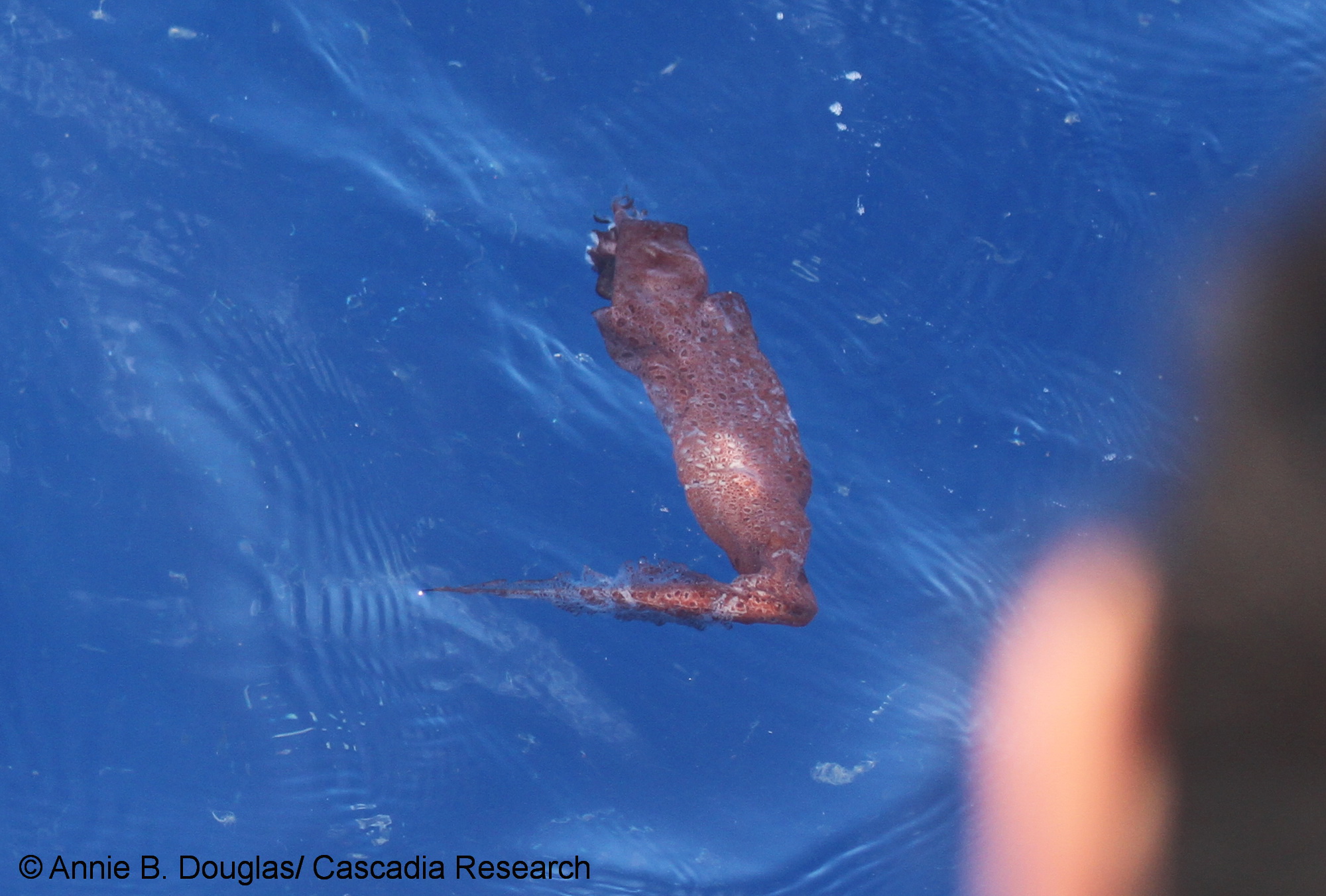 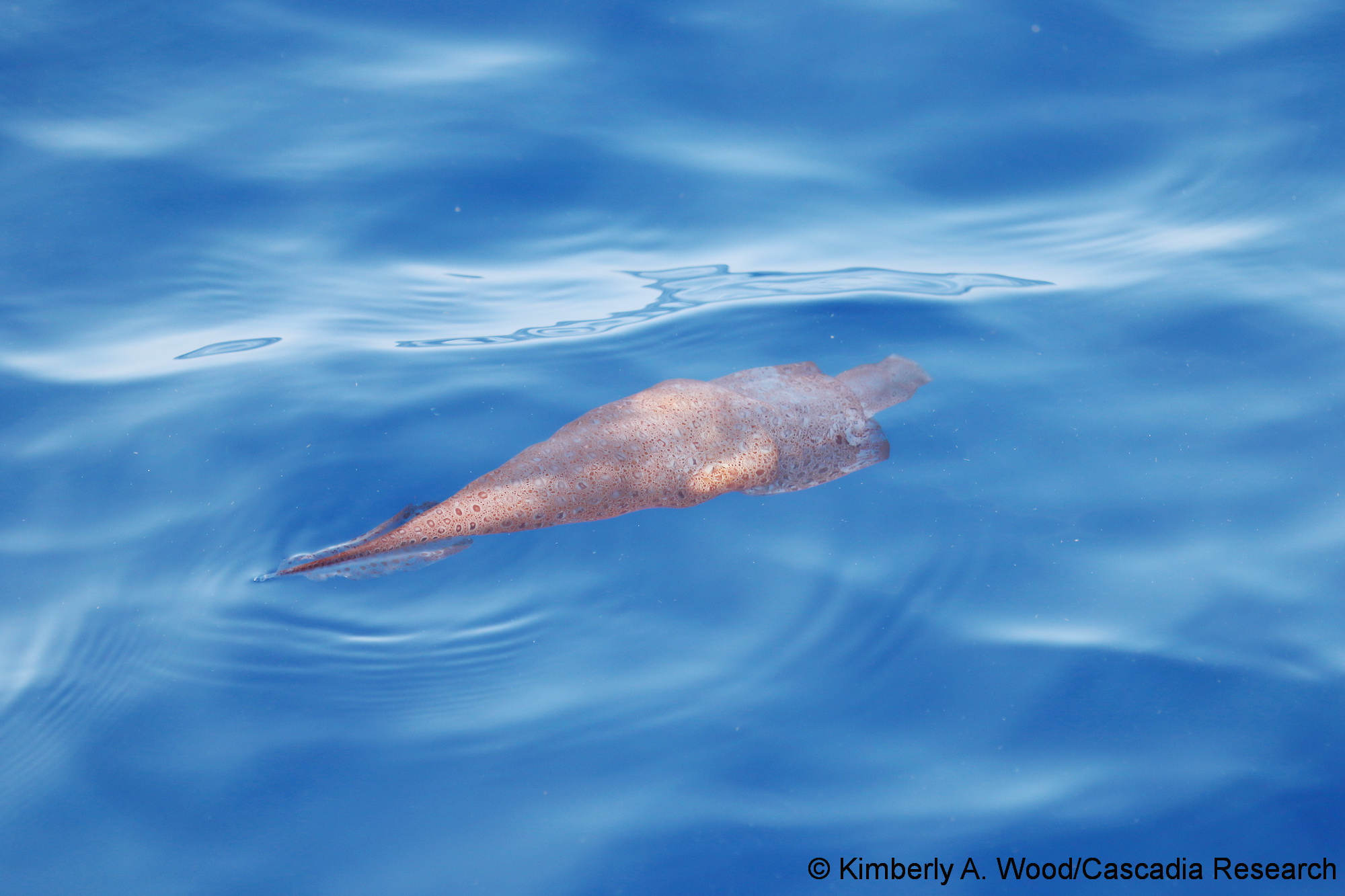 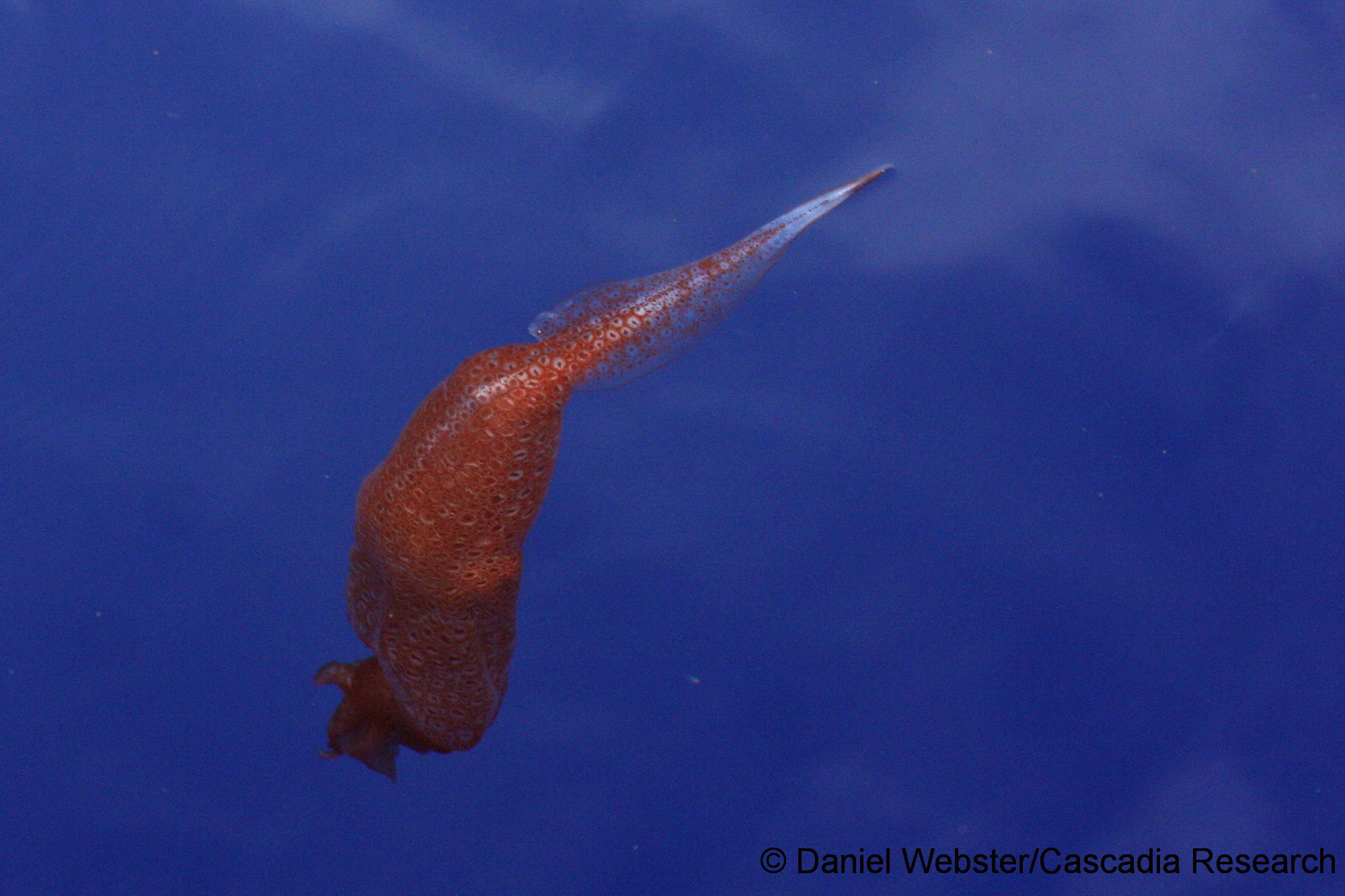 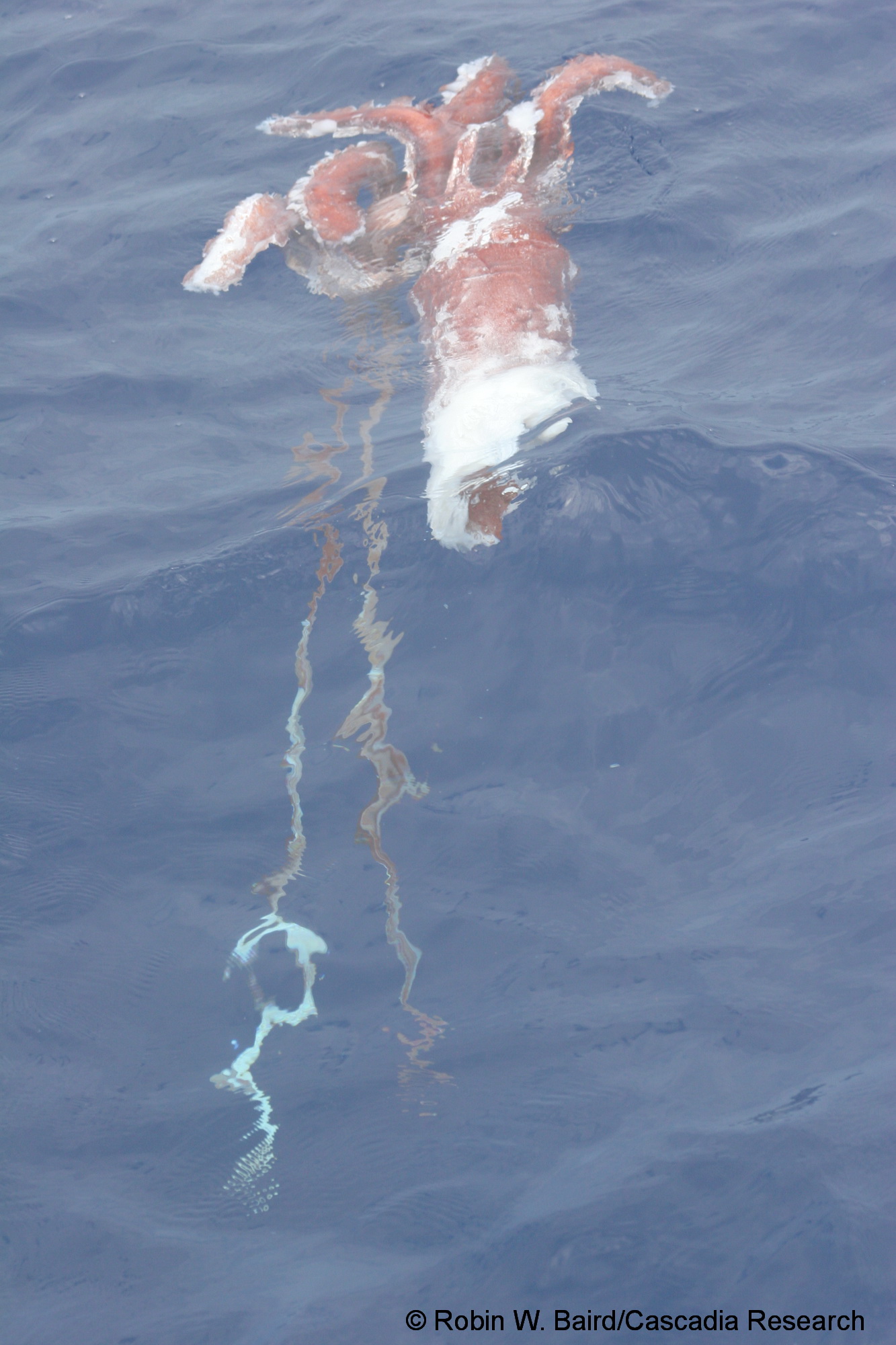 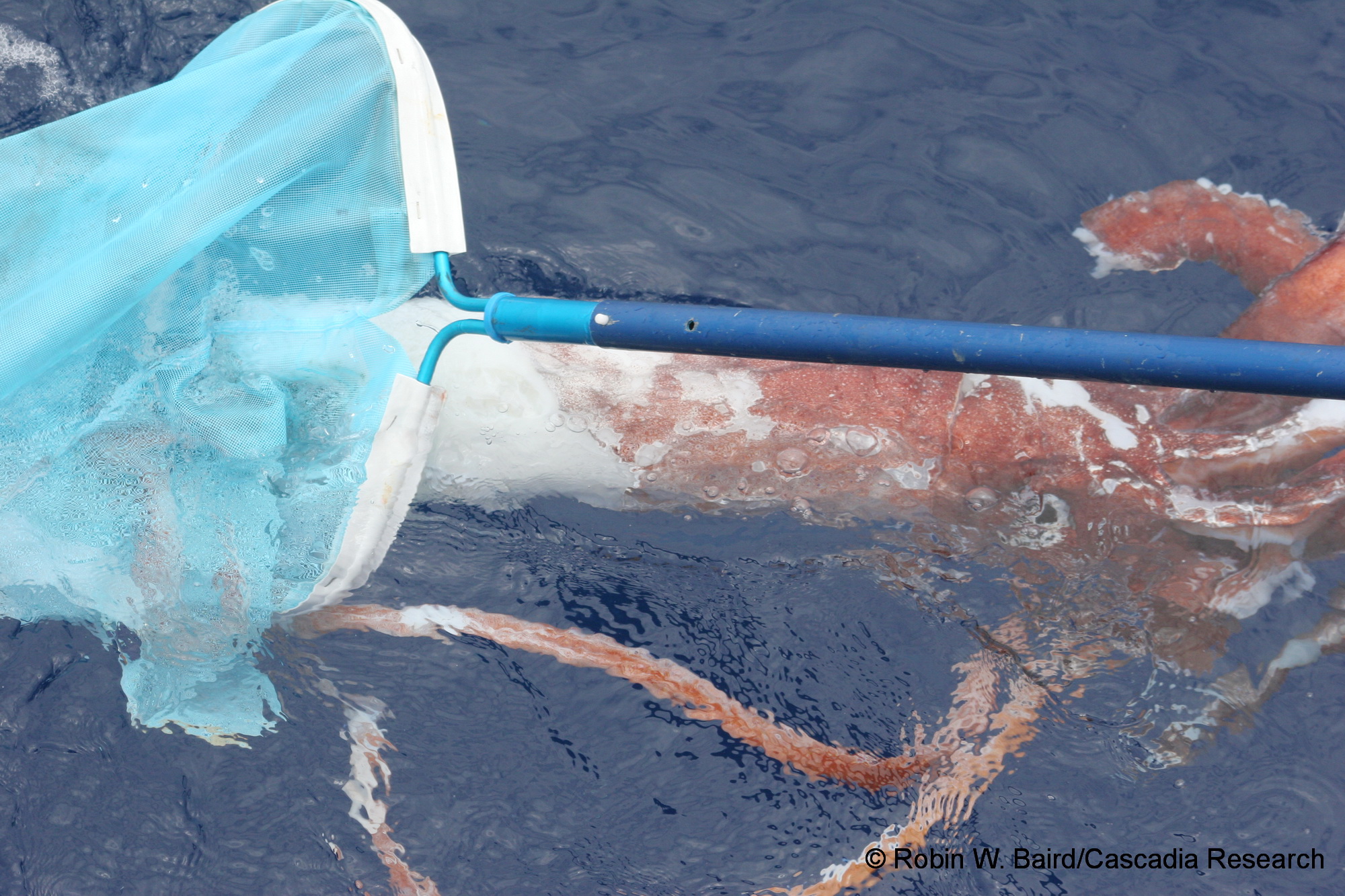 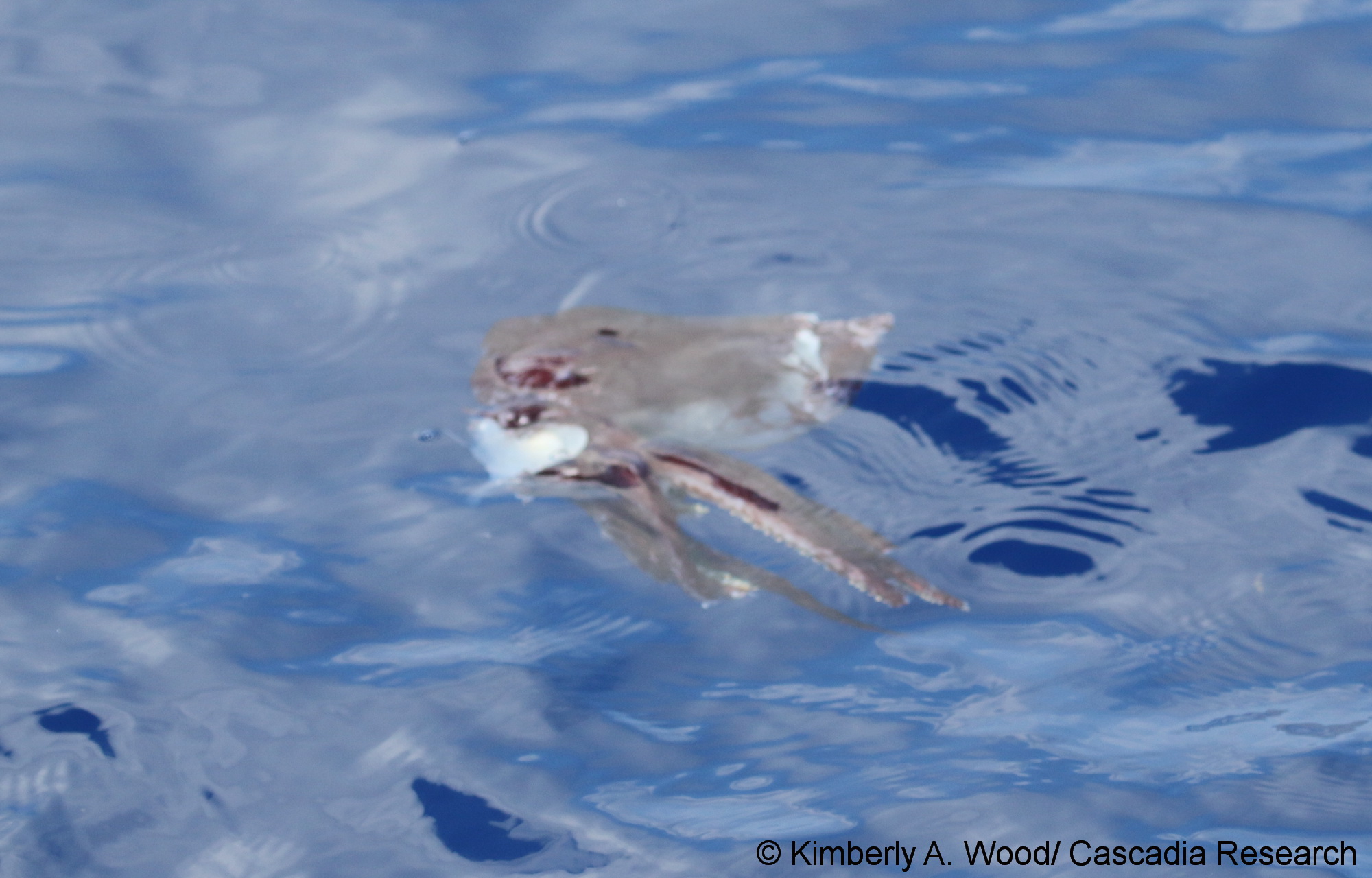 We’ve collected just one specimen of Octopoteuthis nielseni, off O’ahu in November 2017. This species is known to be consumed by both melon-headed whales and pygmy sperm whales in Hawaiian waters (West et al. 2009, 2018). 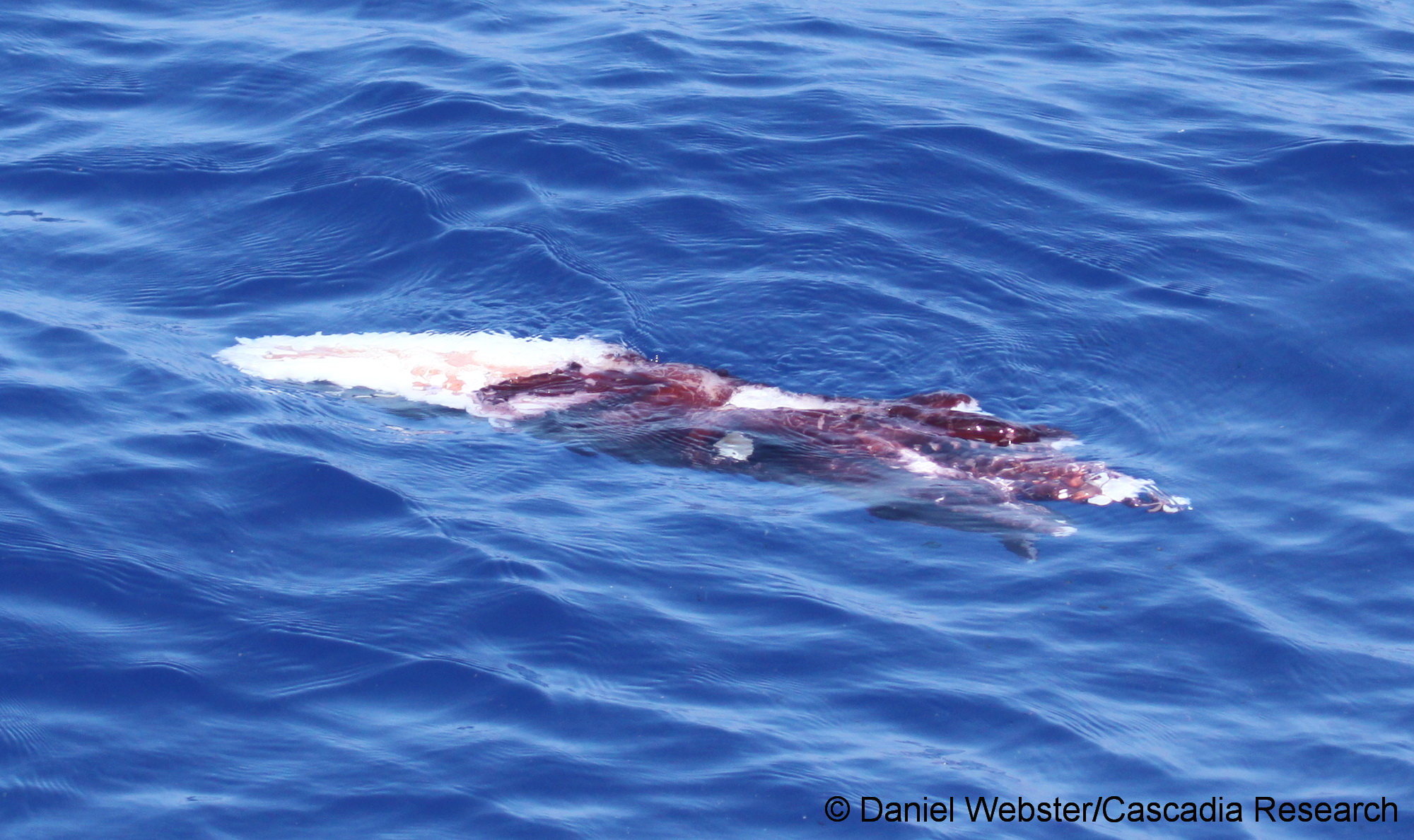 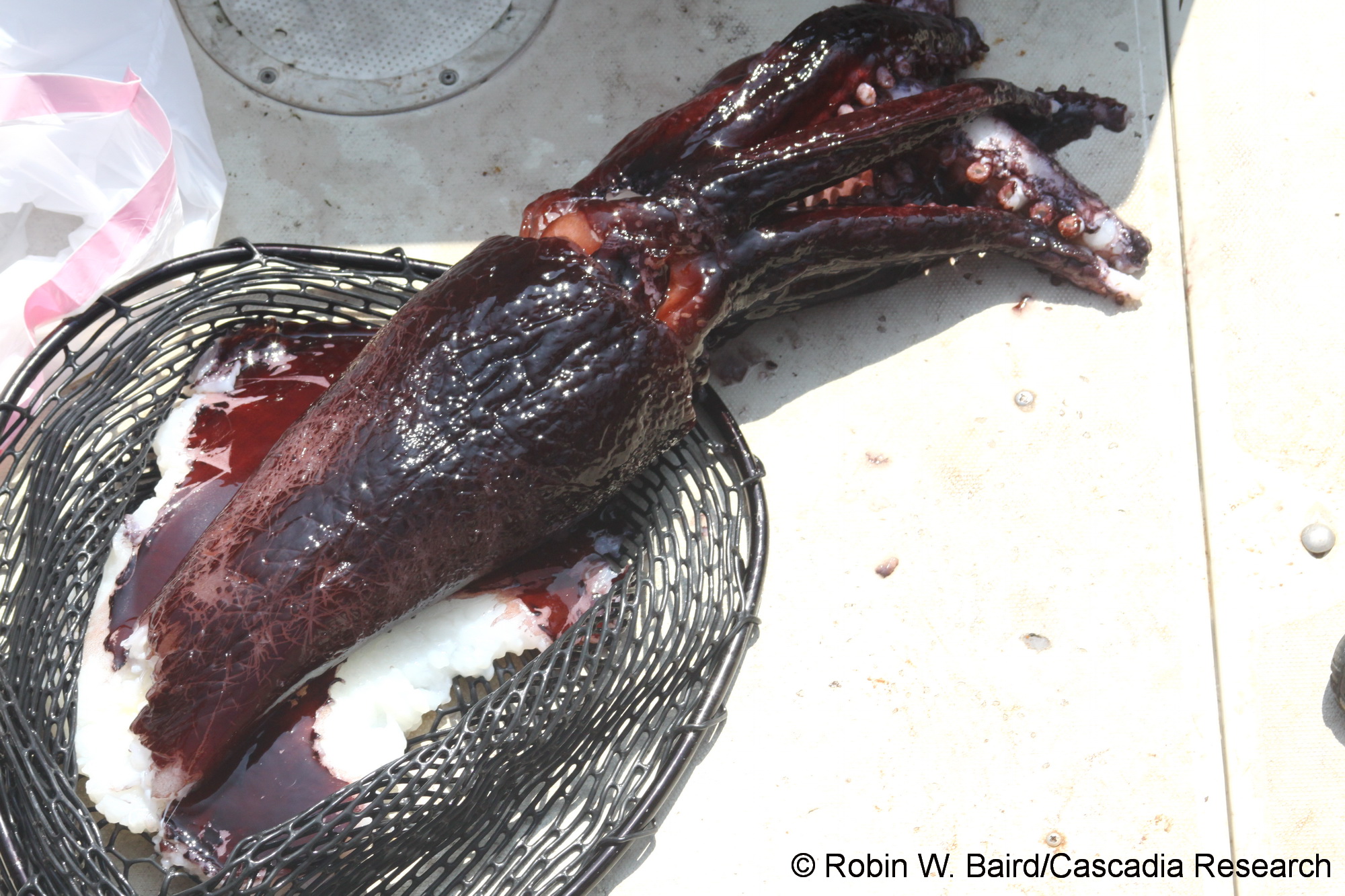 We’ve collected three Taningia danae, one in October 2009 and two in October 2011. This species is known to be consumed by melon-headed whales in Hawaiian waters (West et al. 2018). 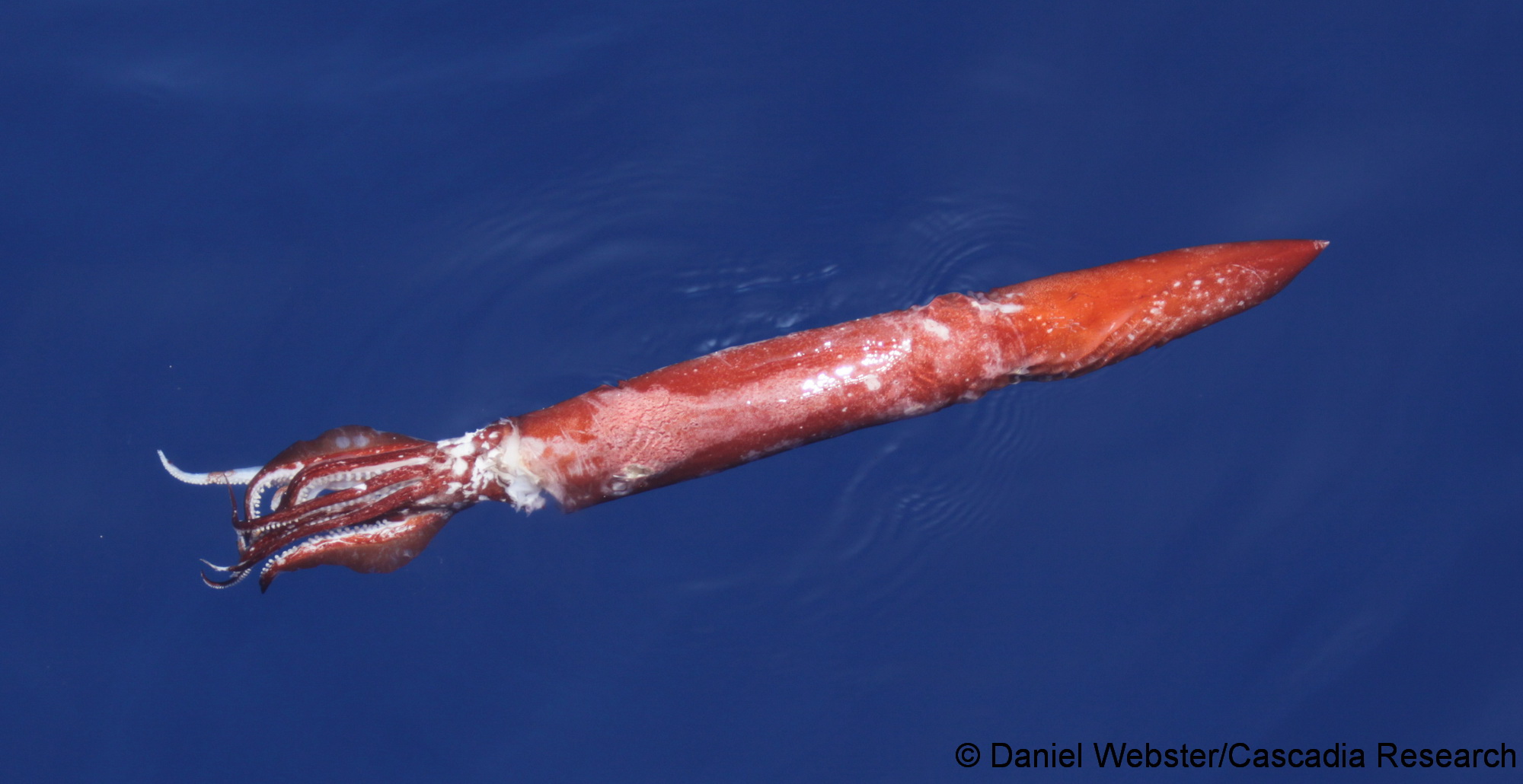 We’ve collected one Pholidoteuthis massyae, in April 2009. This species is known to be consumed by melon-headed whales, rough-toothed dolphins, and Cuvier’s beaked whales (West et al. 2017, 2018; Shaff and Baird submitted). 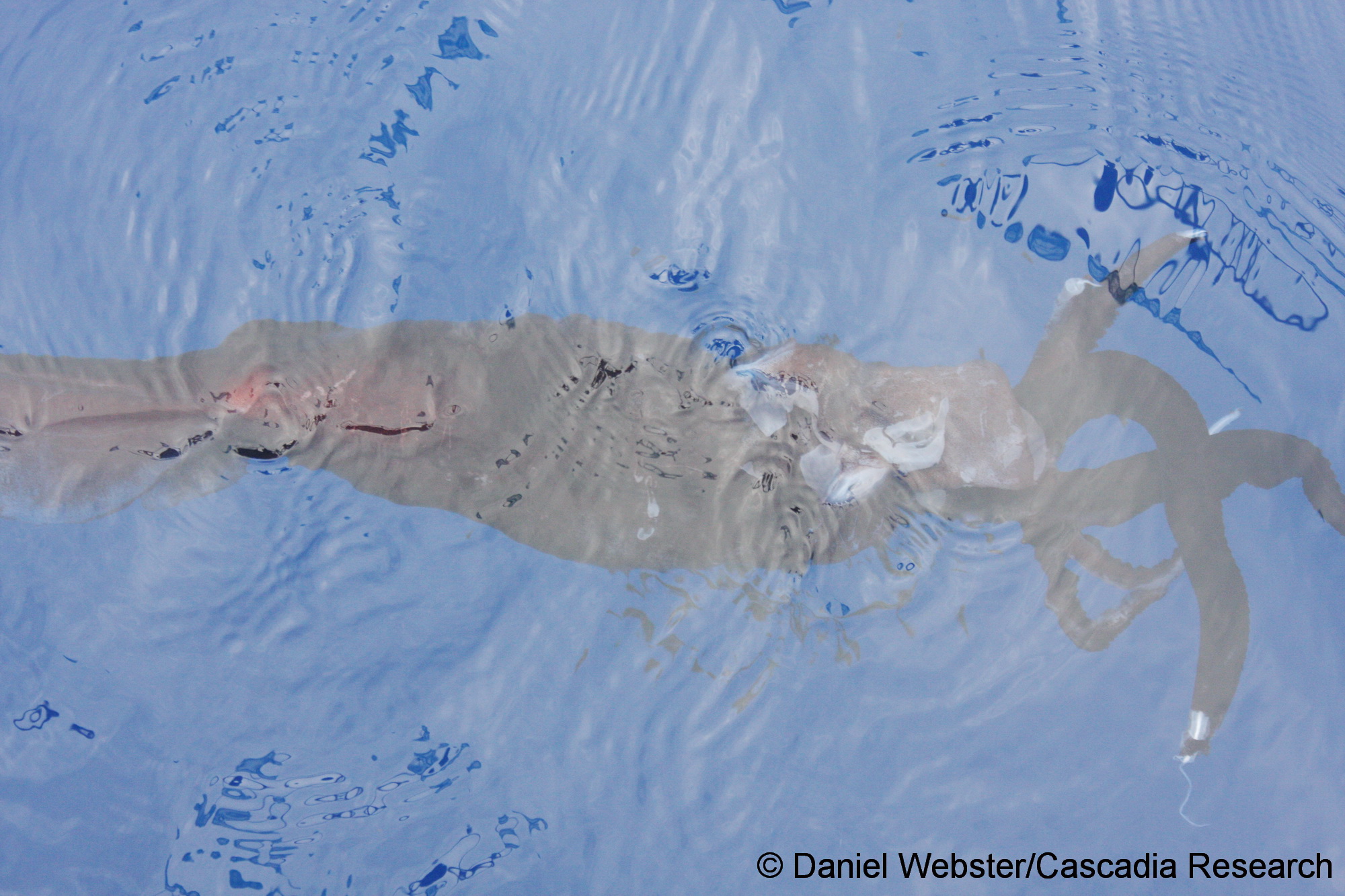 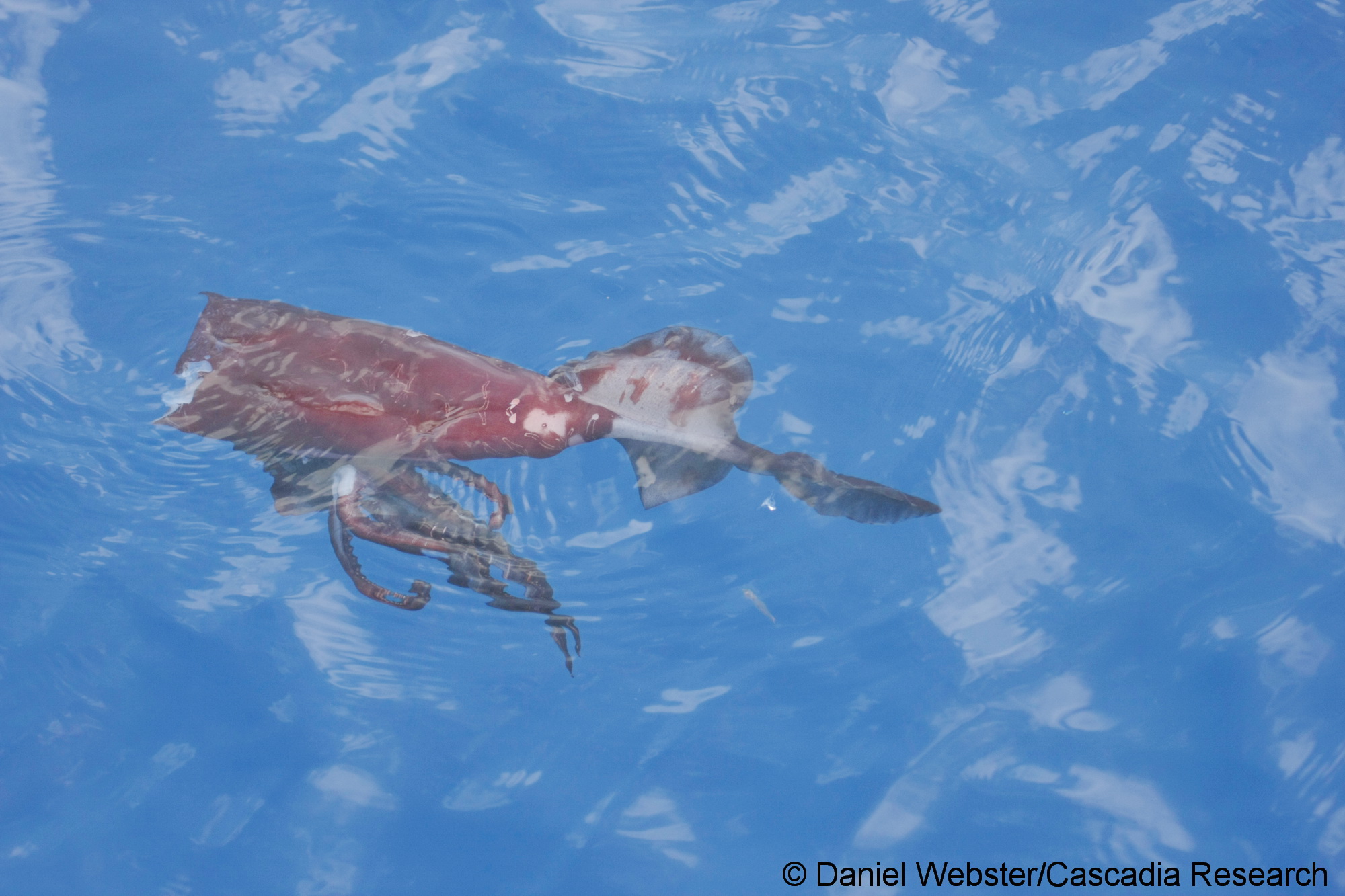 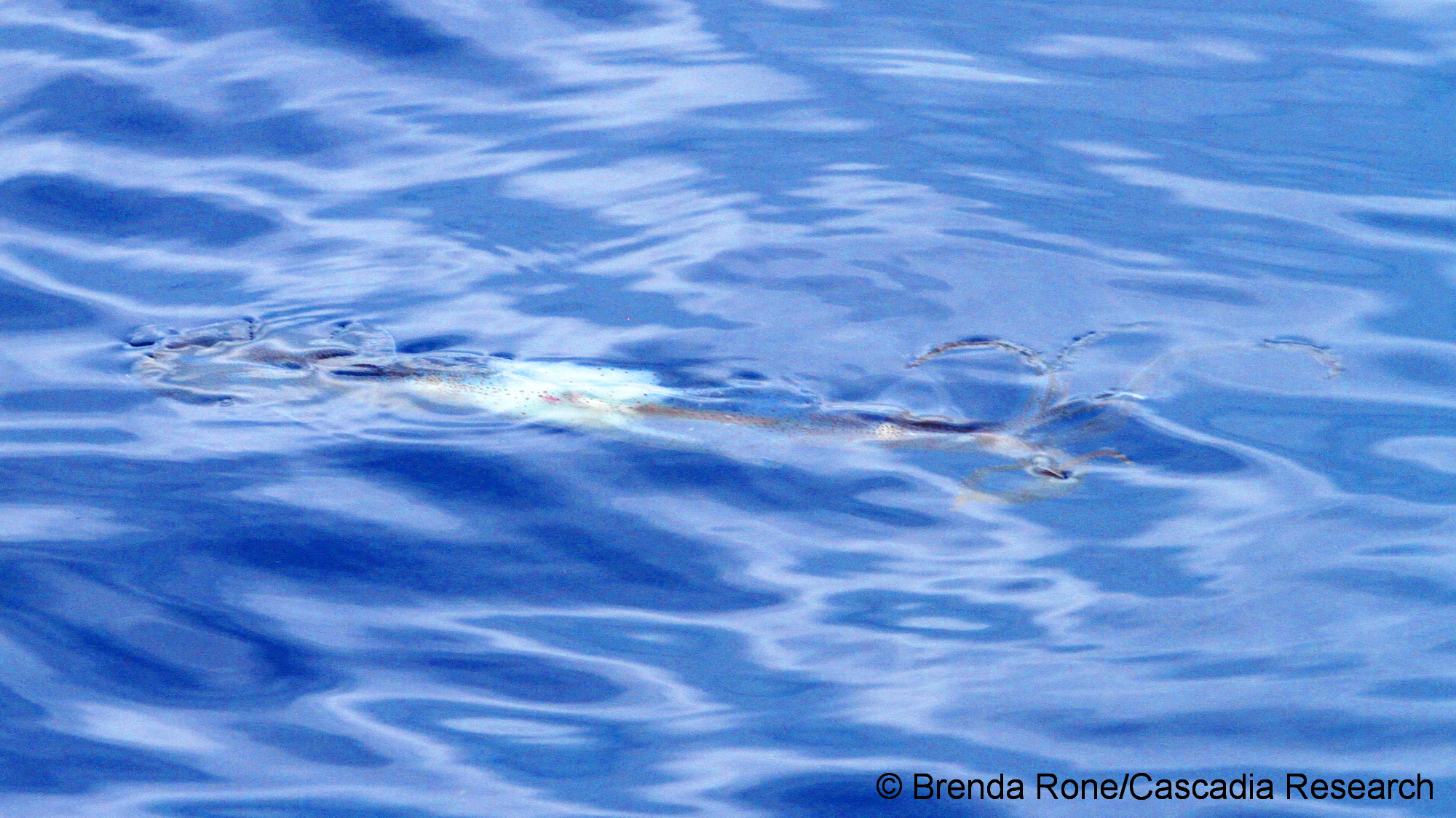 We’ve collected two Grimalditeuthis bonplandi, one in December 2008 and one in July 2014. 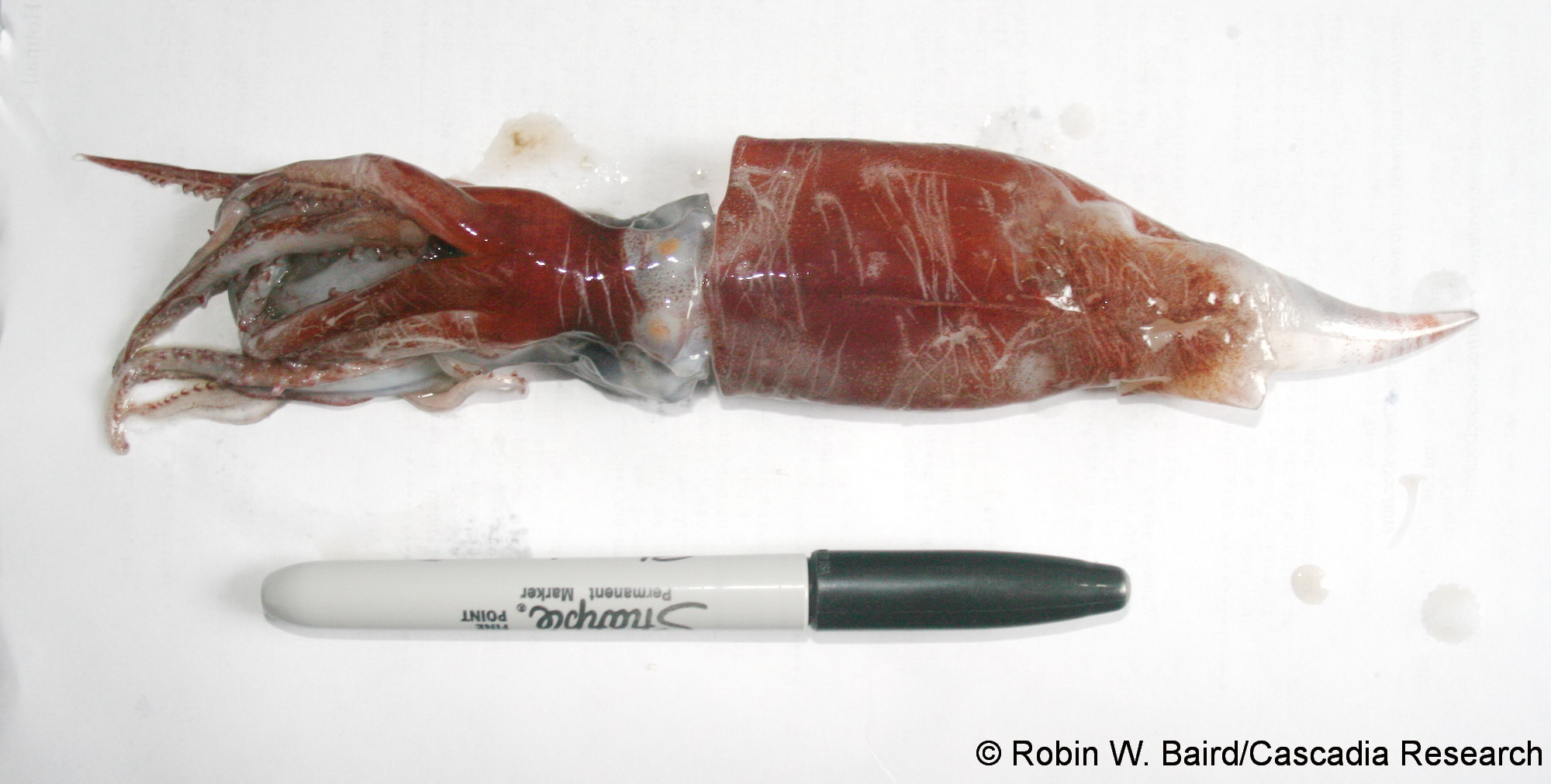 We’ve only collected one Enoploteuthis reticulata, off Hawai’i Island in August 2007. 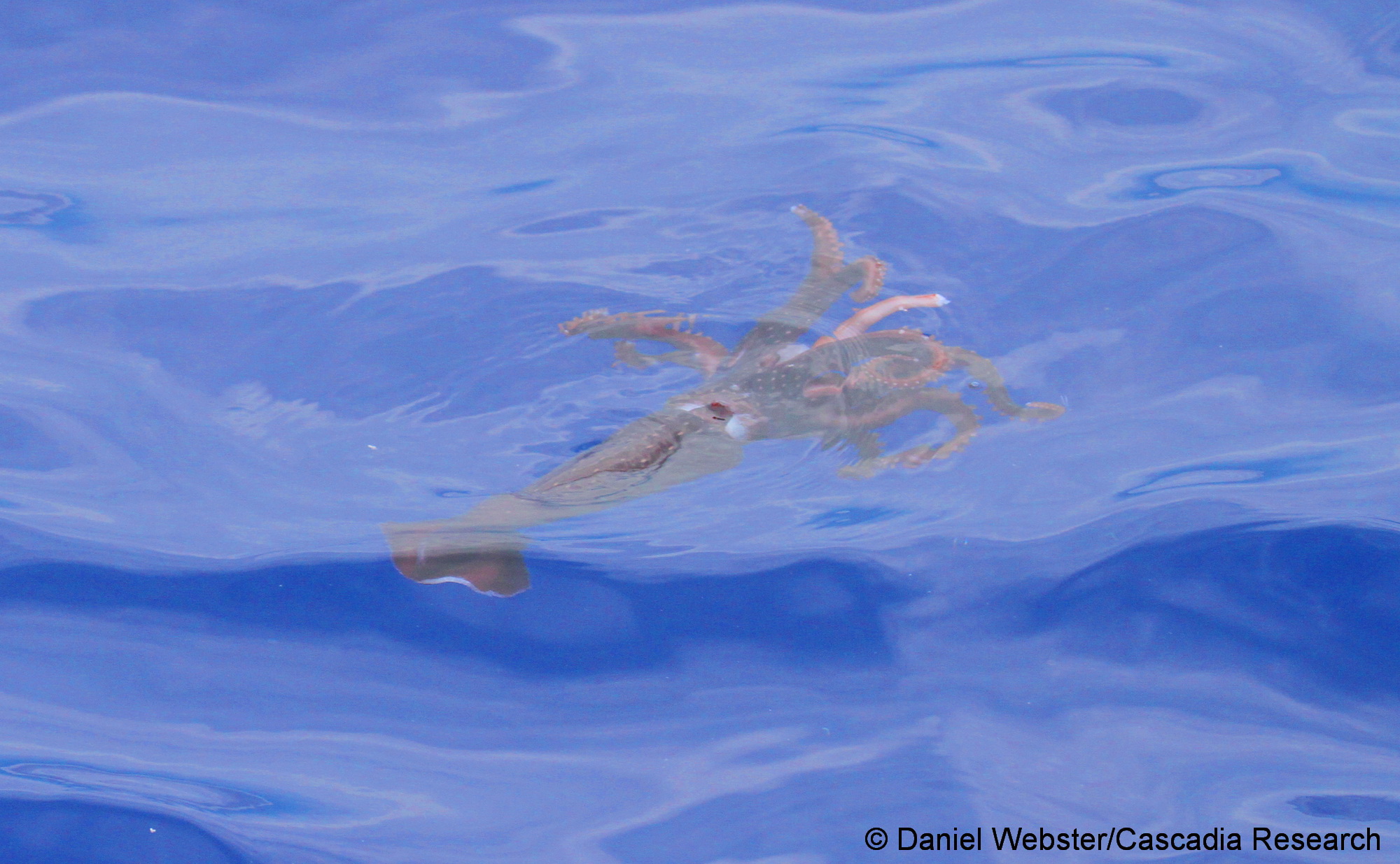 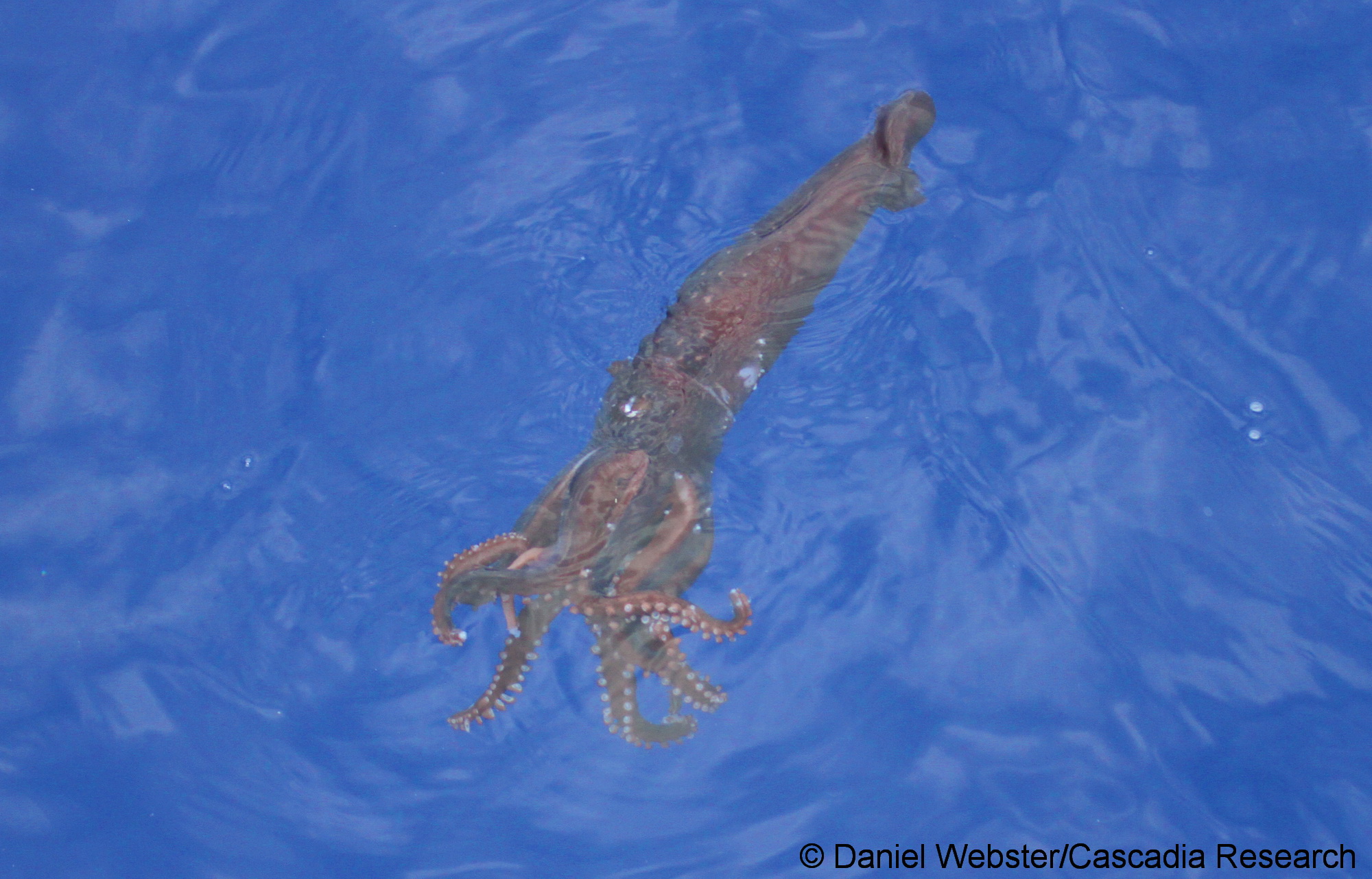 We’ve collected five Histioteuthis cerasina over the years, one off O’ahu and four off Hawai’i Island. 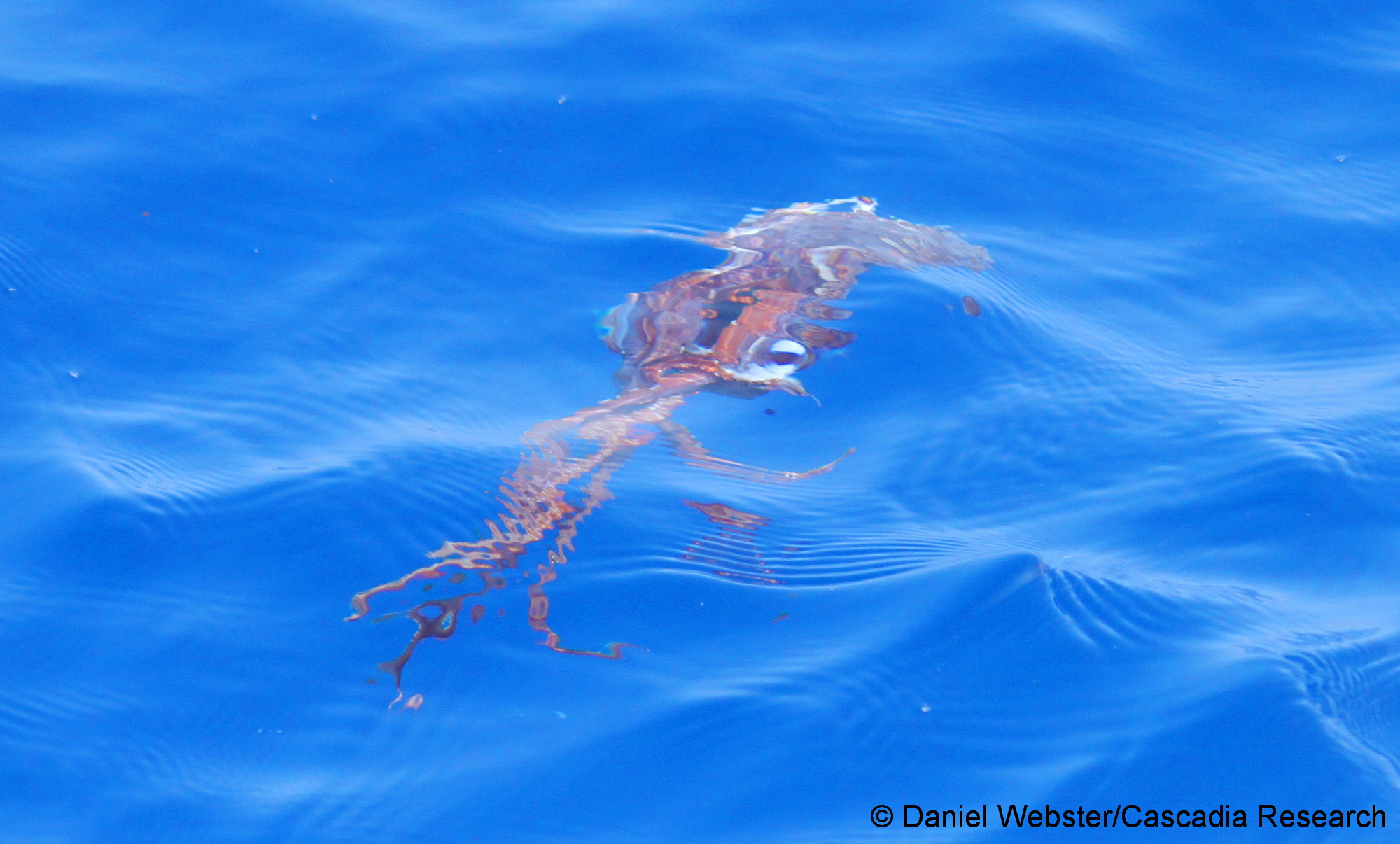 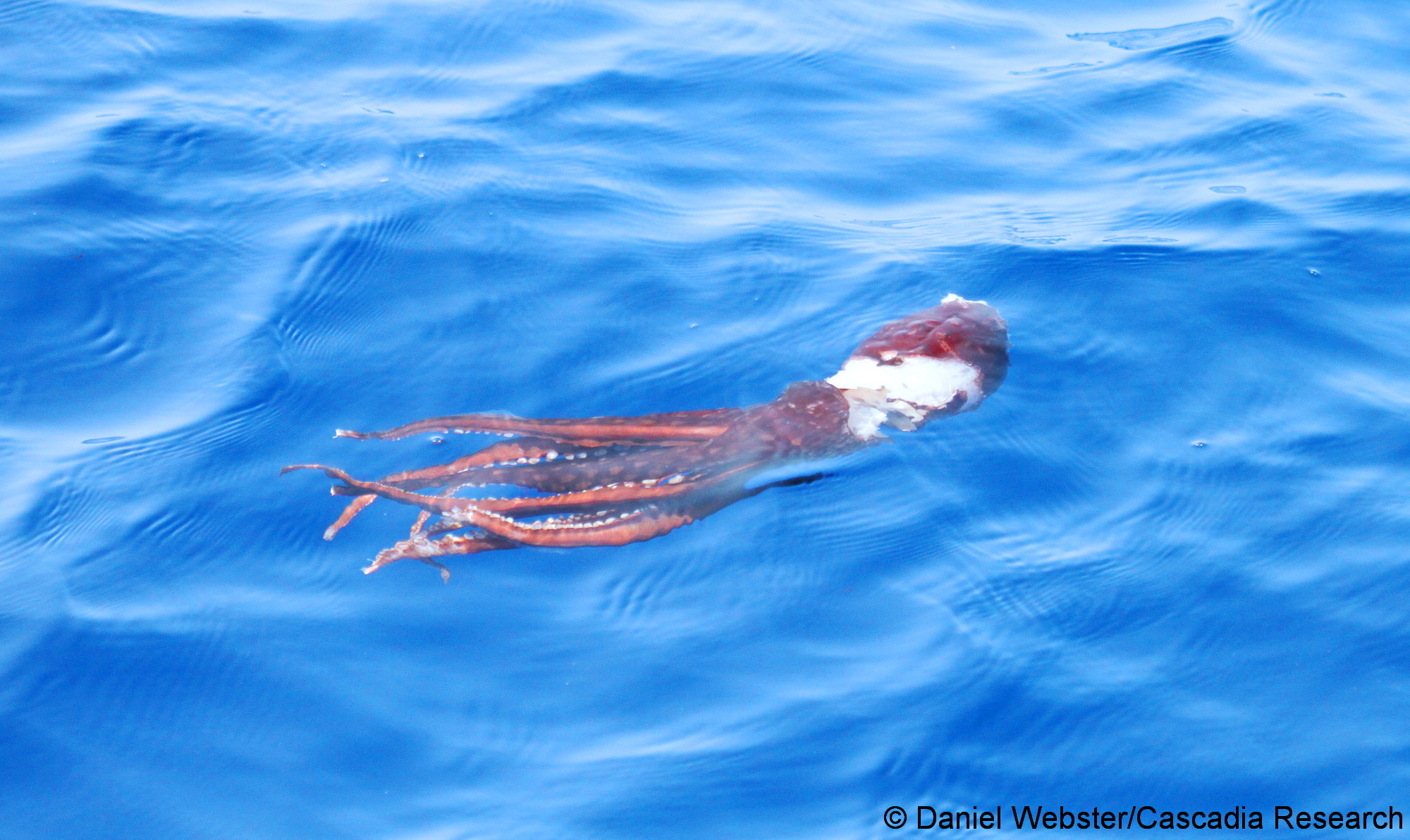 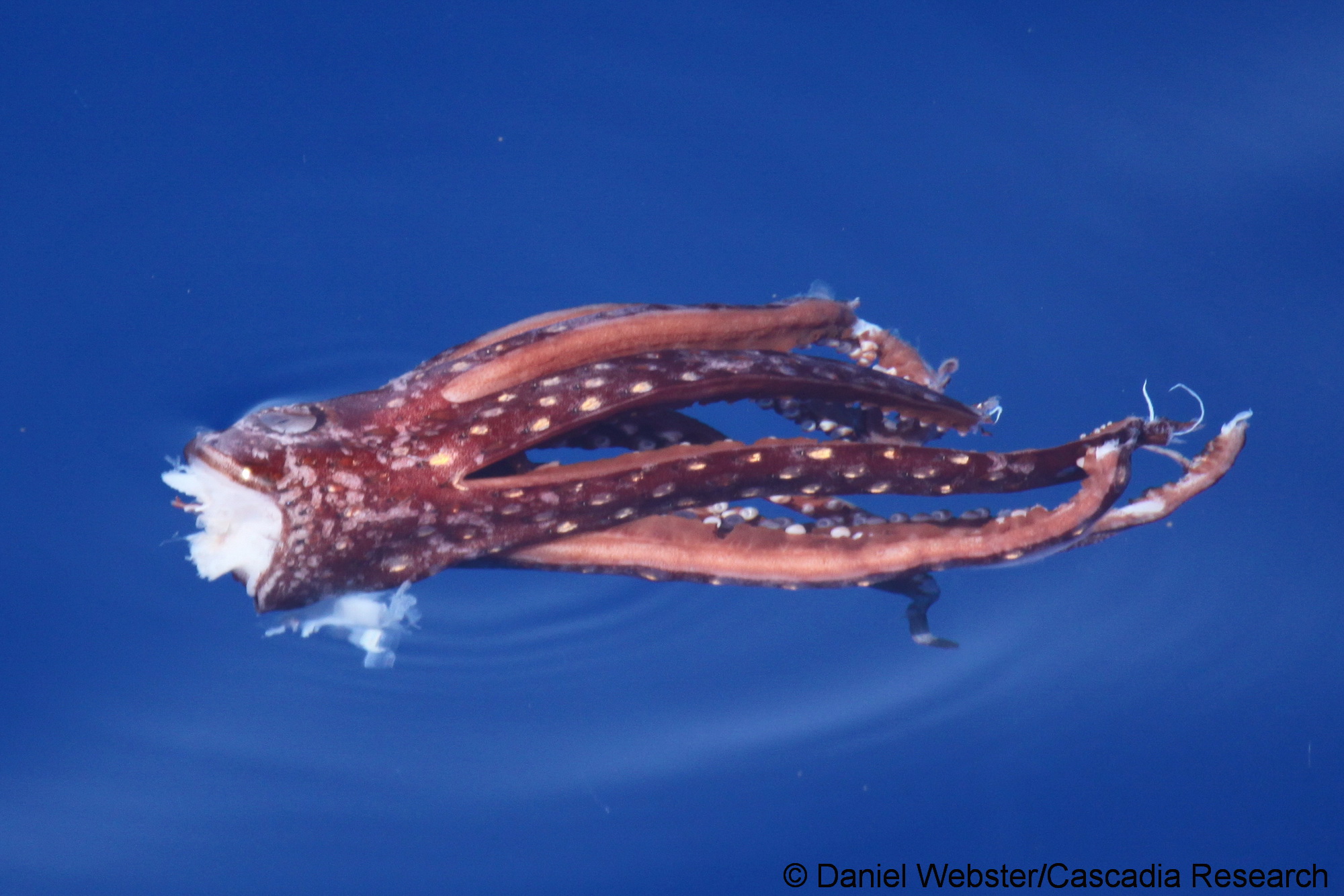 Stigmatoteuthis hoylei is by far the most frequently collected species in Hawai’i, representing about 1/3 of all the cephalopods we’ve collected, and we’ve collected them off Kaua’i and O’ahu as well as Hawai’i Island. This species is known to be part of the diet of melon-headed whales, pygmy sperm whales, Cuvier’s beaked whales, and short-finned pilot whales (West et al. 2009, 2017, 2018). 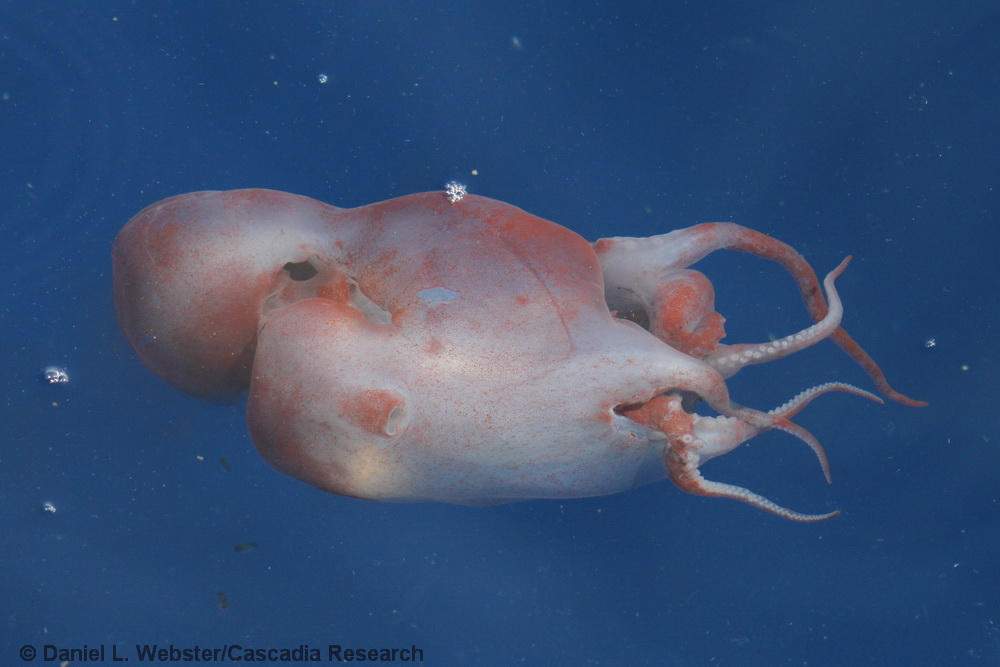 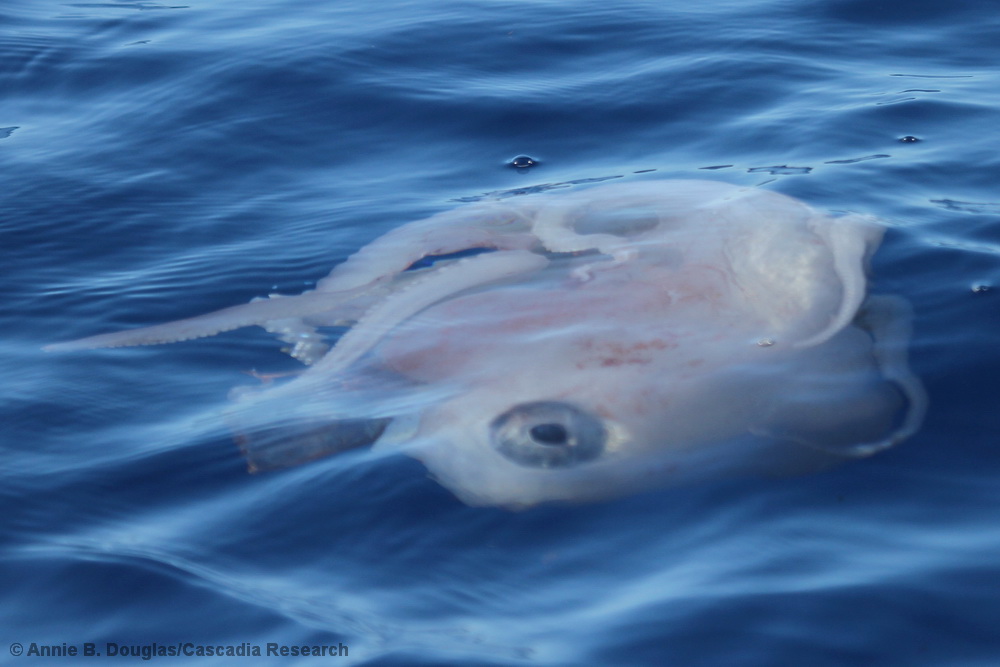 We’ve collected five Haliphron atlanticus, one off Lãna‛i (the only cephalopod we’ve collected in the Maui Nui area), and four off Hawaii‛ Island. One of the specimens was collected near short-finned pilot whales. 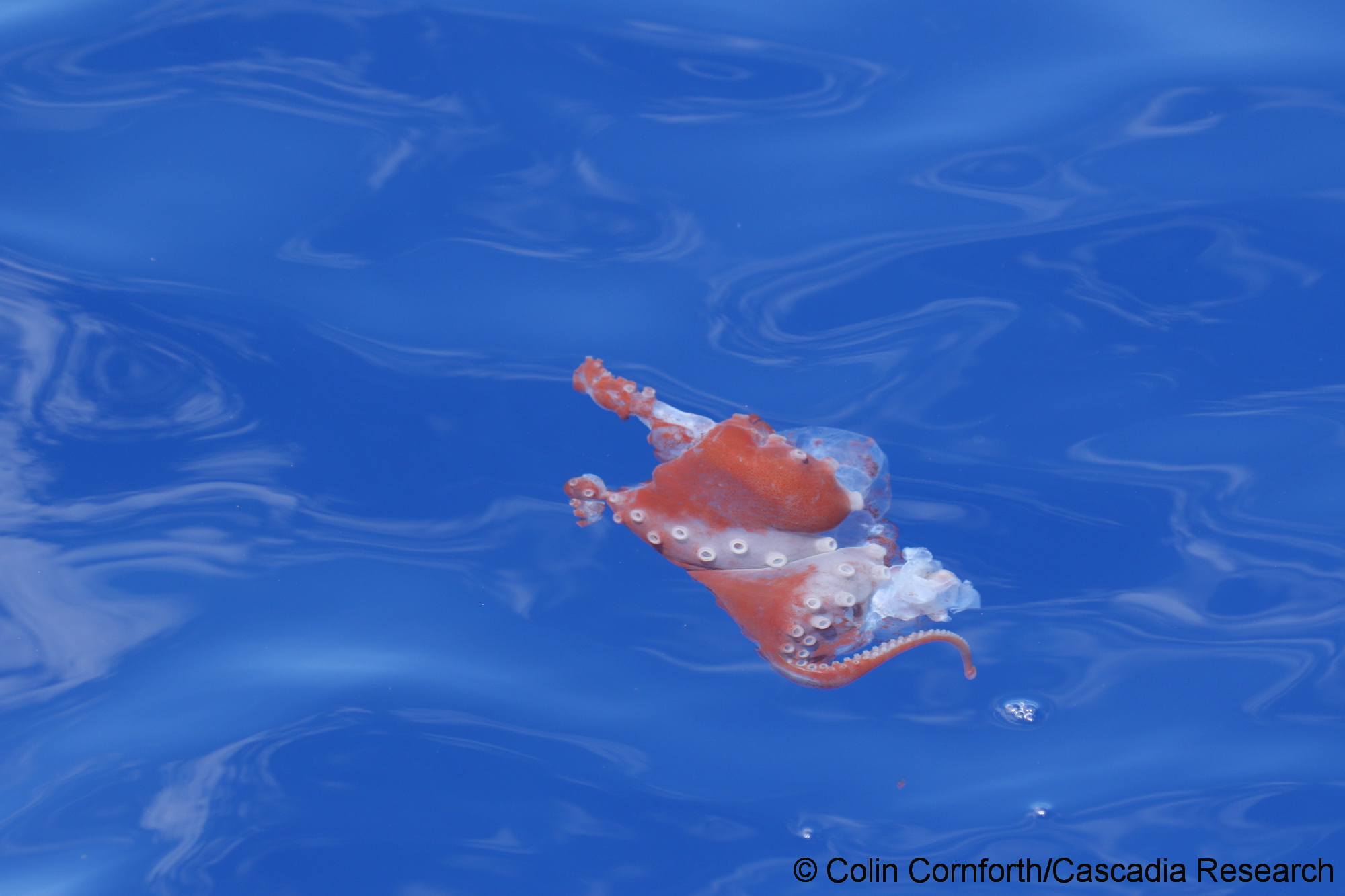 We’ve only collected one Ocythoe tuberculata, off O’ahu in November 2017. This species is known to be in the diet of pygmy sperm whales in Hawai’i (West et al. 2009). 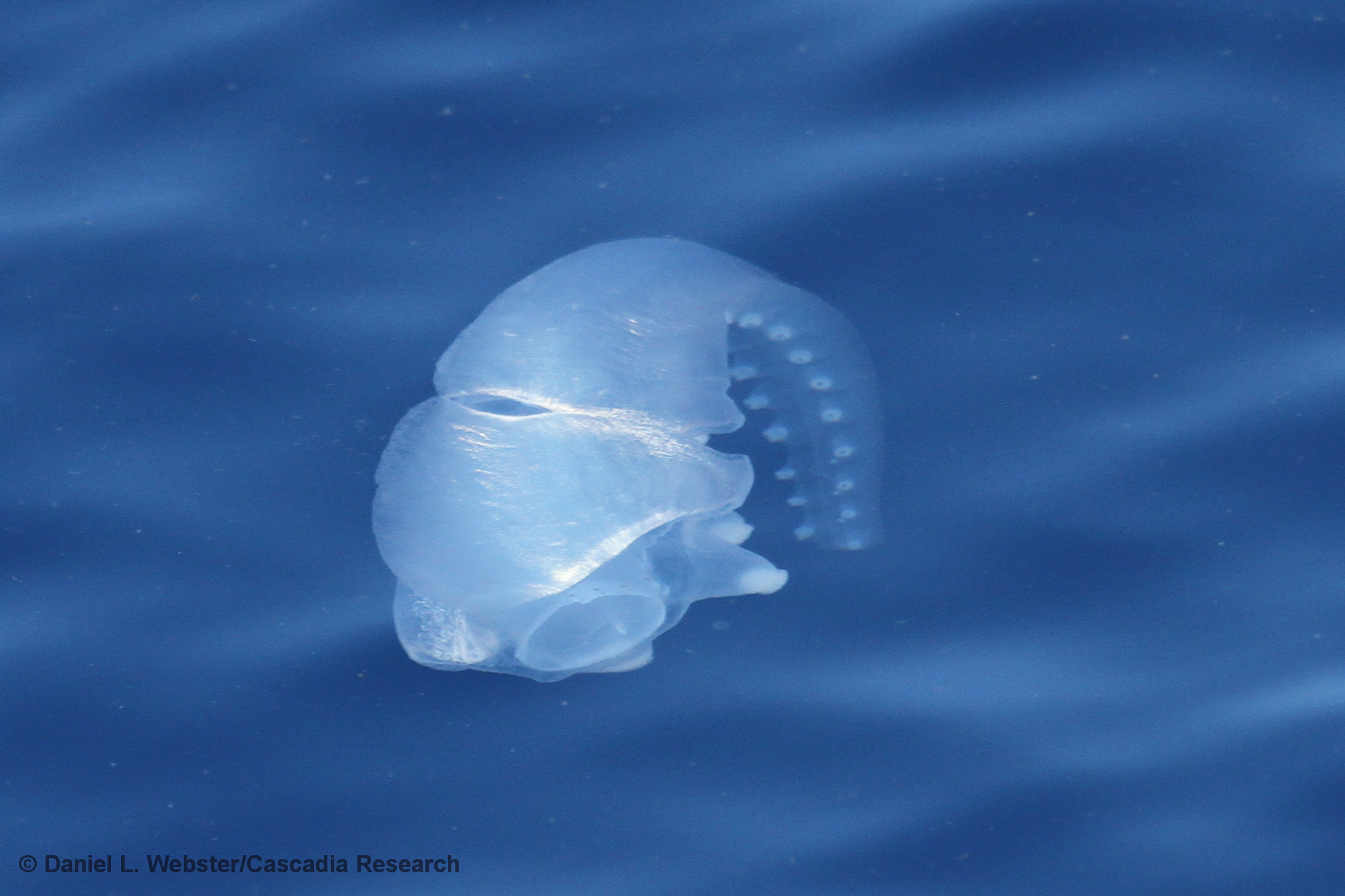 We’ve only collected one Tremoctopus violaceaus, in November 2011, and it was in a number of pieces!

For some references on diet of odontocetes in Hawaiian waters, check out these:

Click here to return to the Hawaiian Cetacean Studies Page