A little bit of background on pygmy killer whales. Pygmy killer whales were first discovered based on two skulls, one described in 1827 and the other in 1874. The species was then effectively lost to science until 1952. The first six times live individuals were documented in the wild are worth reporting. The first live individual known to be of this species was harpooned, off Taiji, Japan, and brought in for processing. Although the individual was quickly flensed almost all the parts were obtained and the external appearance was recreated and described, along with the skeleton. The common name pygmy killer whale was first proposed based on this specimen by Yamada (1954). The second time this species was documented alive in the wild, off Senegal in 1958, the individual was captured and killed. The third known at-sea sighting was of a group of 14 individuals off Japan in 1963 – in this case the entire group was captured and taken into captivity, where all died within 22 days. The fourth recorded at-sea sighting of this species, also in 1963, ended a bit better, when only one individual in the group was captured and taken into captivity, this time in Hawai‘i. The fifth record of a live animal was an individual captured and accidentally killed in a tuna purse seine off Costa Rica in 1967. In the spring of 1969 a live individual was harpooned off St. Vincent. Finally, later in 1969, a group was observed in the Indian Ocean with none of them being killed or captured.

For copies of our publications on pygmy killer whales click here 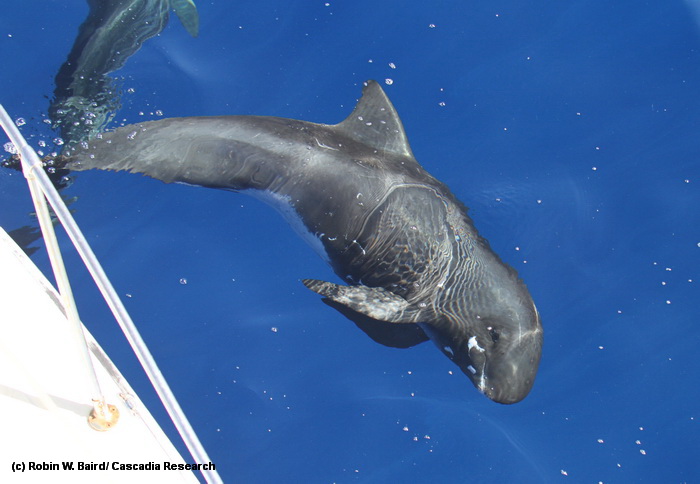 An inquisitive pygmy killer whale off the bow of our research vessel, off O‘ahu in October 2010.

The pygmy killer whale, a small toothed whale found in tropical oceanic waters world-wide, is one of the least-frequently encountered species of delphinids (oceanic dolphins) in the world. More is known about pygmy killer whales in Hawai‘i than anywhere else in the world, based primarily on a long-term photo-identification study originally started by researcher Dan McSweeney of the Wild Whale Research Foundation, a non-profit group based on the island of Hawai‘i. Dan’s observations were combined with additional photo-identification effort since 2000 by Cascadia Research Collective, and results were published in Marine Mammal Science in 2009. This study has continued to date, based on our work and contributions of photos by many others, including tour operators and ocean users from Wai‘anae to Kona. Currently, we have data on pygmy killer whales from 63 encounters and 6 satellite-tag deployments, in addition to photographs contributed by community scientists and other researchers, and there are almost 800 unique individuals in our photo-ID catalog for this species! The most expansive sighting record we have is of an individual (HIFa373) seen 63 times between 2008 and 2020! 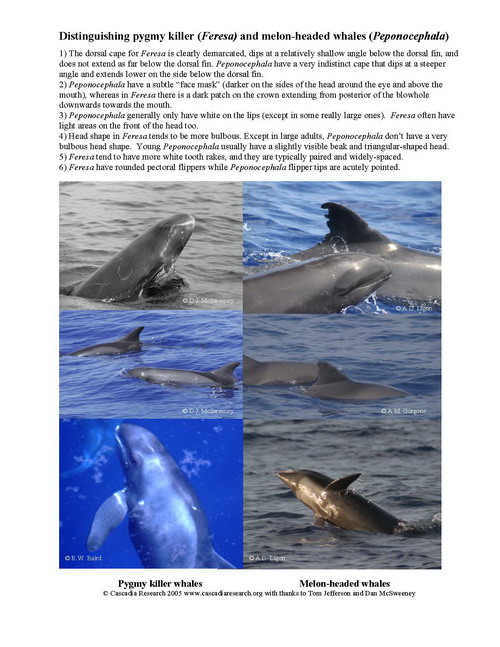 Download the above for information on how to distinguish between pygmy killer whales and melon-headed whales. 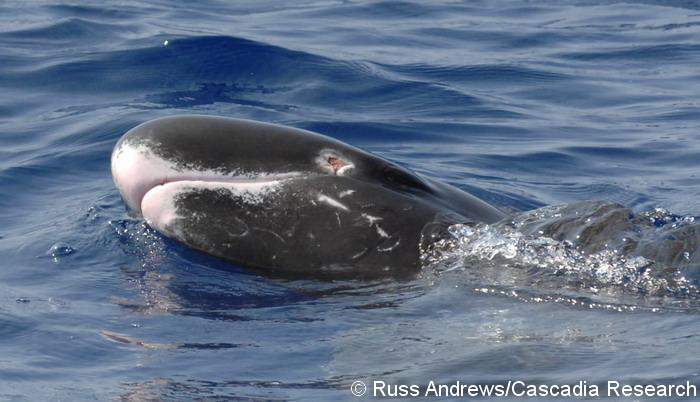 Pygmy killer whale with healing injury on mouth-line, probably due to an interaction with a line fishery. In a recent examination of pygmy killer whale mouthlines using underwater footage, we found that 62% of individuals have evidence of injuries stemming from anthropogenic sources, with 49% of these appearing to be consistent with fisheries interactions.

Although they are encountered only very infrequently, there is a small resident population of pygmy killer whales off the island of Hawai‘i and another one off O‘ahu and Penguin Bank. This is the first evidence of a resident population of this species anywhere in the world. Individuals have been re-sighted over periods of over 30 years (as of 2018), and they use the area year-round. In addition, using photographs of individuals traveling together in the same group, it is clear that some associations among individuals are very stable, similar to the long-term associations seen in some other species of whales such as false killer whales and short-finned pilot whales. 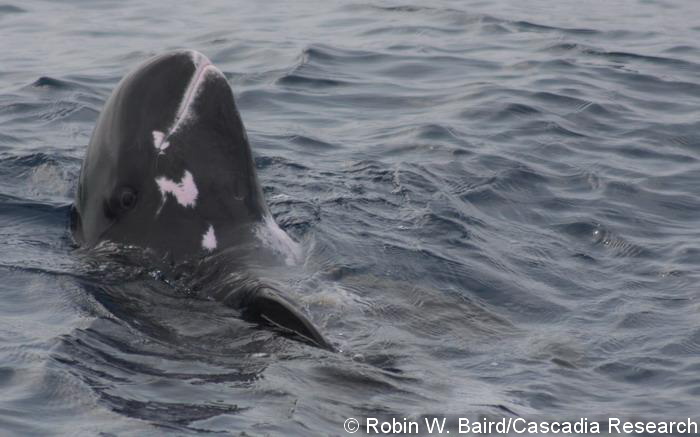 Pygmy killer whale rolling at the surface, December 2008. Note the scarring on the mouth-line, probably due to interaction with a line fishery.

Because of the small population size the population is more at risk from human impacts than most species of whales and dolphins in Hawaiian waters. A stranded pygmy killer whale found dead on O‘ahu in 2006 had evidence of interacting with fishing gear (a hook and line injury in the mouth), and Hawai‘i is also home to regular naval sonar exercises that potentially could impact this species. With the very low encounter rates it will be almost impossible to determine whether the population is increasing or decreasing or monitor the impacts of such activities as naval exercises. Also, the standard methods NMFS uses for monitoring population trends, large-vessel line-transect surveys, will not be feasible, given the low encounter rates. 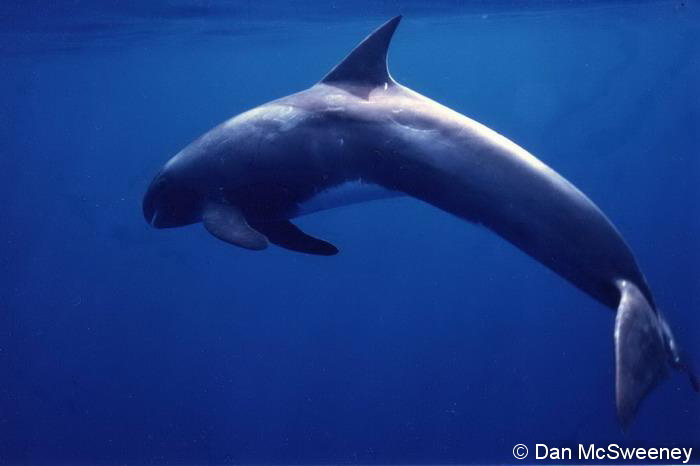 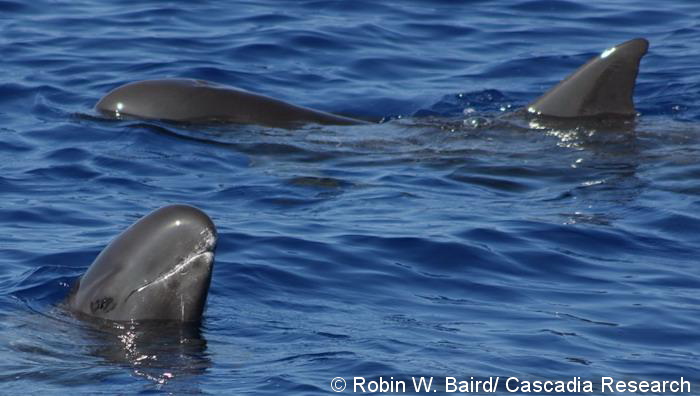 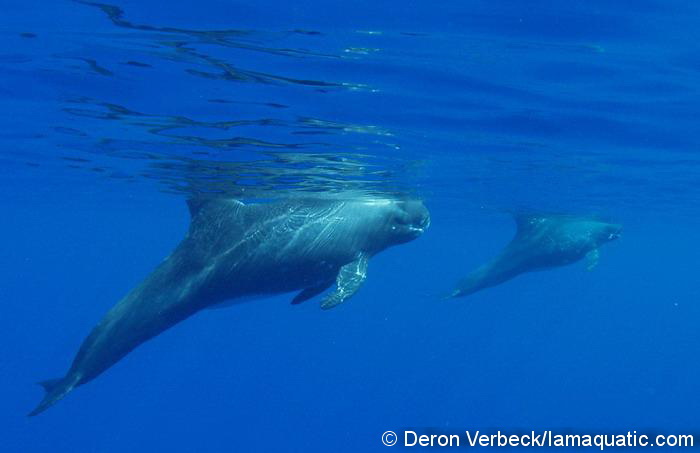 Pygmy killer whales resting underwater off Kona. The individual in the foreground, HIFa006, is an adult female seen 47 times since 1994 (as of November 2021).

A pygmy killer whale calf with shark bite wounds, evidence that this species is predated on by large sharks. Over the years we’ve encountered multiple individuals of this species with possible shark bite scars.

Another view of the pygmy killer whale calf with shark bite wounds. 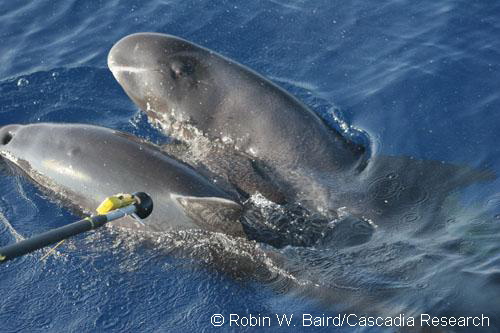 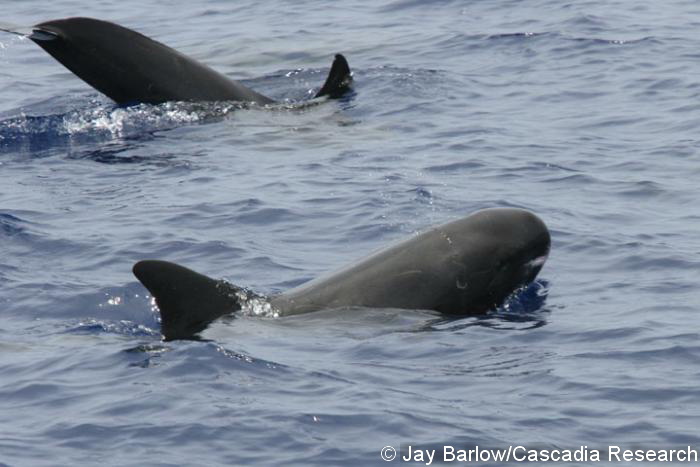 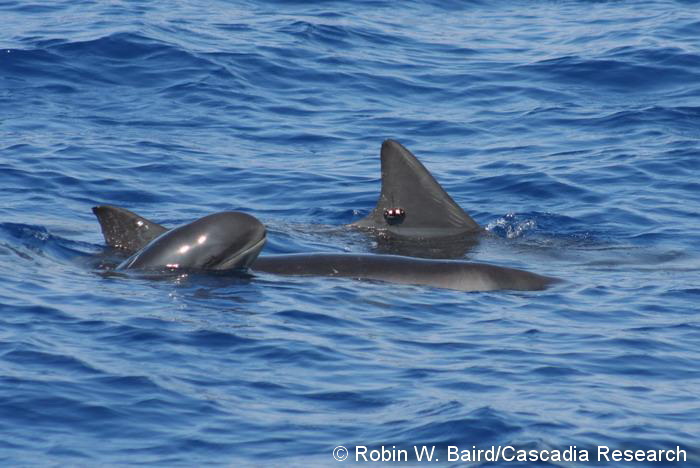 For more information on Pygmy Killer Whales, see the following publications and presentations:

All photos are copyrighted and should not be used without permission.

Return to the Hawaiian Dolphin and Whale Species Page