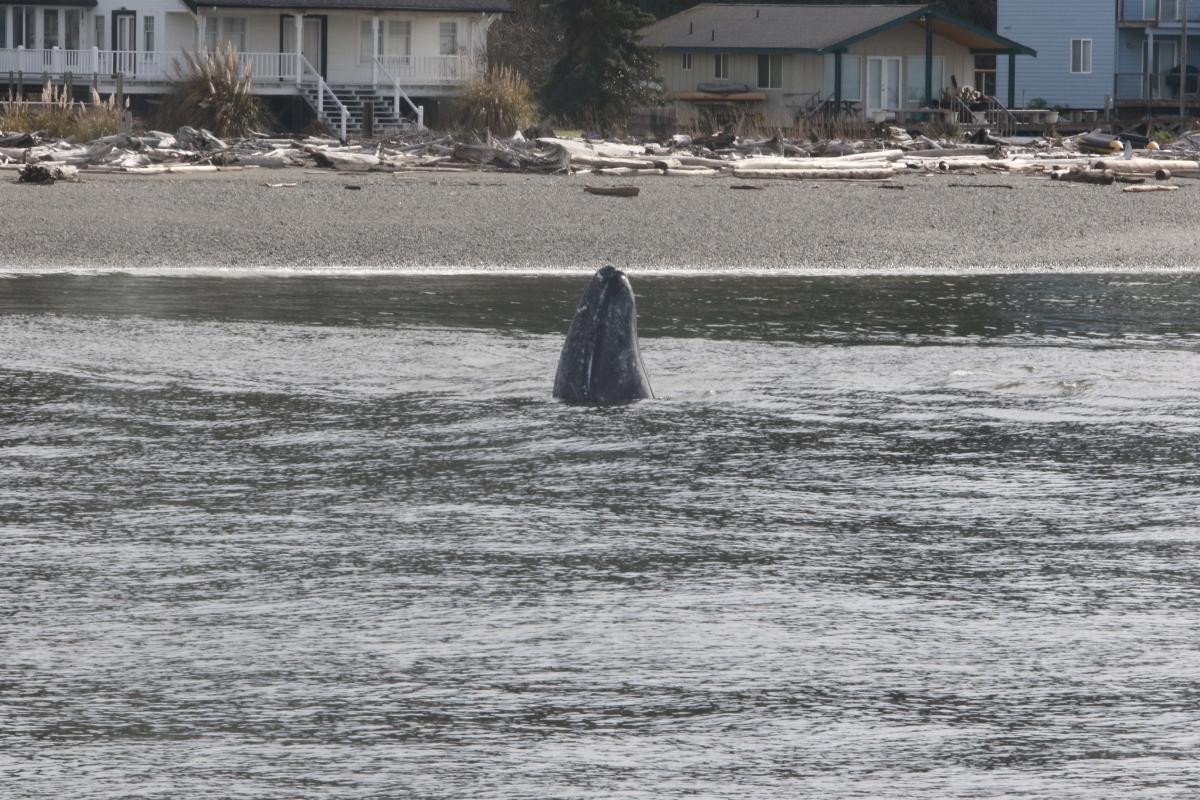 The North Puget Sound gray whales, also known as the “Sounders,” represent roughly a dozen individual whales, part of the larger population of the Eastern North Pacific gray whales. They are also sometimes referred to as the Puget Sound Regulars or the Saratoga Grays. During their northern migration from Baja California, these individuals break off of the migration route to feed on ghost shrimp for 2-3 months each spring (approx. March-May) in the North Puget Sound waters. They then continue north to the Bering and Chukchi seas for summer feeding. In the North Puget Sound they are generally spotted feeding around the southern ends of Whidbey and Camano Island, Saratoga Passage, Port Susan, Gedney/Hat Island, and the Snohomish Delta. Feeding pits, large pits in the sediment layer created when the whales forage for ghost shrimp, have been seen in these areas via satellite images.

The sex of 10 of these whales has been determined genetically from skin samples, 7 are male and 3 are female. None of the known females has been seen with a calf, though there have been periodic gaps in their visiting the area which may indicate they are calving some years but not bringing the calf to the area. This could be due to later timing in migration after having a calf, or to avoid risk to the calf in the more dangerous inland waters.

Table showing sightings of the Sounders individuals from 1990-2019

View educational poster on the Sounders

First identified in our initial survey of the North Puget Sound region, CRC-21 appears to be one of the individuals who pioneered this risky feeding behavior in shallow intertidal waters, earning him the name Shackleton, after the renowned polar explorer Ernest Shackleton. He is frequently seen with CRC-22, and both individuals were first identified together in 1990. Shackleton has not been seen to fluke when diving, possibly because he has an injured fluke. In 2008 we were able to catch an exact departure date from the area for this individual, when he was spotted heading north along the SW coast of Vancouver Island on May 24.

CRC-22 with new injury on left side

Along with CRC-21, this individual was one of the first identified in the area. CRC-22 is one of the few known females in the group, and has been given the name Earhart, after Amelia, for pioneering feeding use of the N Puget Sound intertidal waters. Though she has been sighted at least 18 different years since 1990, Earhart has never been seen with a calf. We suspect that she does not venture into Puget Sound during years she has a calf, as evidenced by one-year gaps in sightings. In 2015 we deployed a video suction cup tag on this individual, by which we were able to see her being followed closely by three males in the group. On 23 April 2017, a gray whale was hit by a boat off of Whidbey Island. We have identified that whale as Earhart, because she was in the group of 3 whales present during the strike and due to injuries that were not present on her left side prior to the collision. The full extent and impact of these injuries on Earhart is unknown at this time (for more information see our report on the incident).

Named for the double knuckles along his back behind the dorsal hump, CRC 44 or Dubknuck was not seen in Puget Sound until 1991. He was first identified in southern Puget Sound, and was sighted multiple times in various locations around the sound over the next month. On 25 April 1991, he was seen in Port Susan, seeming to have discovered the productive feeding grounds in that area and joining some of the regular whales there. Dubknuck has returned most years since 1991, including the last 10 years without interruption.

CRC-49 is the most distinctive of the Sounders due to the large white patch on the right side of his back, prompting the name Patch. He has been seen in the area for at least 23 years since initial sighting, and like others in the group appears to leave the area in May. For example, CRC-49 was seen heading north along Vancouver Island on 7 May 2012. On 25 March 2016 we deployed a video tag on this individual. Patch was observed closely associated with CRC-531 and CRC-723. He has been easily identified by his patch in underwater video of two other whales, swimming closely beside them or resting on the bottom.

CRC-53 was nicknamed “Little Patch” for the distinctive white spot on his left side (smaller than on Patch). He was first seen in 1991, staying in the area later than is typical for these whales, through 26 June 1991. On 21 May 2010, he was seen near Hein Bank after having left Puget Sound. Little Patch is known to spyhop during some encounters.

A biopsy sample of CRC-56 was obtained in March 2016, enabling us to determine the whale’s sex as male. He has several characteristics that likely explain why a biopsy had not been obtained until then, such as often surfacing only briefly, avoiding boats, and generally leaving earlier in the season than the other Sounders. Prior to obtaining a biopsy sample, 14 years of continuous sightings with no calf suggested that this individual was male.

This individual was observed with the secondary wave of animals joining in this feeding behavior from 1999-2000. This coincided with an Unsual Mortality Event for gray whales, potentially a period when individuals were searching out new food sources. The sex of this individual has not been determined yet, but we hope to collect a skin biopsy sample in the coming years. This whale is a less regular visitor in the group, it has been seen 10 different years but generally only a few times each year. On 12 October 1999 this whale was seen off of the Oregon coast, after initial sighting in Puget Sound, and appeared smaller in size that year.

This whale also arrived in the second wave of individuals in N Puget Sound. In 2015 and 2016 we deployed suction cup video tags on this whale and were able to collect some key data on the underwater behavior of these gray whales. We documented several behaviors this way. CRC-383 was lying on the bottom of the sound and having close underwater associations with other whales. He was also seen feeding on ghost shrimp in the Snohomish Delta when the tide rose enough to allow him the necessary water depth (10 ft) to enter that area.

CRC-396 is a unique individual in that she has only been seen in the N Puget Sound 3 separate years, but instead of migrating north after feeding, remains in th Pacific Northwest throughout summer and fall on the outer coast of Washington and Vancouver Island. She is the only one of the Sounders that is also part of the Pacific Coast Feeding Group (PCFG) gray whale subpopulation.

Since CRC-531 is at least 16 years old, we expect her to be having calves during years she is absent from N Puget Sound (2012 and 2015). She appears to leave the area earlier than other whales, the latest we have observed her leaving is April 27th. She was sighted off of south Vancouver Island in 2007 after leaving the sound. In 2016 we collected a biopsy sample from this whale in order to test for pregnancy, as might be expected if she is calving in alternate years.

Originally nicknamed Lucy by one of the local whale watch operators, CRC-723 has been genetically identified as male and we propose a name change to Lucyfer. Gray whales were called “devil fish” by whalers, so we think this name is fitting. Lucyfer has an unusual sighting history compared to other Sounders. He was seen off of Kodiak, Alaska in August 2002, and off of Vancouver Island on 24 and 31 March 2015 which is a known feeding area of the PCFG gray whales. We deployed a suction cup video tag on him in March 2016. The tag remained on for 23 hours, recording more than 9 hours of video and continuous data showing exact timing and number of feeding lunges in the Snohomish Delta. Resting and not feeding off of Hat Island was also recorded.