Studies of the diet of fish-eating killer whales in the nearshore waters of British Columbia and Washington were first undertaken by John Ford and colleagues by collecting fish-scales from behind foraging whales. Based on our work on diving behavior of the “southern resident” population of fish-eating killer whales (click here for a copy of the published paper) we believed that some foraging may be occurring deep in the water column, and that prey caught at depth may not be brought up to the surface as regularly as prey caught near the surface. In 2002 a short pilot project was undertaken with Brad Hanson (then with the National Marine Mammal Laboratory, now with the Northwest Fisheries Science Center) to try to collect fish-scales from behind foraging whales instrumented with time-depth recorders, to be able to assess whether whales coming up from deep dives were bringing prey with them, and to instrument whales with a video camera (the National Geographic Crittercam system, see video clip above) to hopefully obtain footage of predation at depth. While we did not obtain any fish scales from instrumented whales or get footage of predation (see our report by clicking here), this pilot study set the stage for a larger study which we began in 2004. Originally designed to collect fish scales and bits from foraging whales while simultaneously examining the behavioral context of predation, our study quickly expanded to also include collection of fecal and other samples from foraging whales, and uses genetic analyses to determine prey species and for salmon to determine which stock the fish came from. 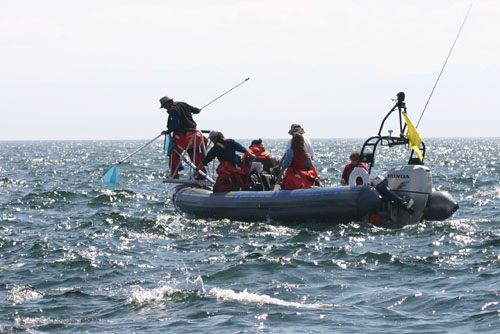 The vessel we use for our diet study has a bow pulpit, allowing for a view down into the water column, as well as providing a stable platform for collecting prey remains or fecal samples, even in rough seas. We use a swimming pool net with an extended handle to be able to collect samples deep in the water column or away from the research vessel. Photo (c) K. Koski. 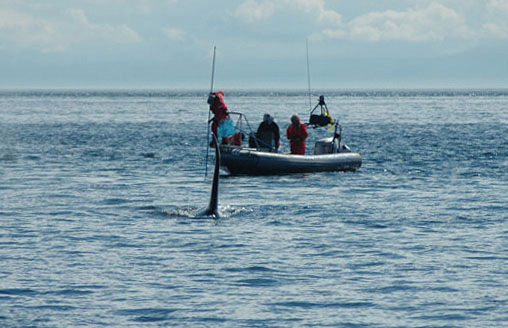 We typically follow 20-60 m behind foraging or travelling whales, checking the “fluke prints” (the upwelling water pushed off the tail flukes) for signs of predation (fish scales or scraps of fish), fecal material, or other types of samples (mucous or regurgitation samples). This research is undertaken under a NMFS Scientific Research Permit, allowing for close approaches to the whales. All possible efforts are made to minimize disturbance to the whales, allowing for extended follows. Photo (c) J. Boyd. 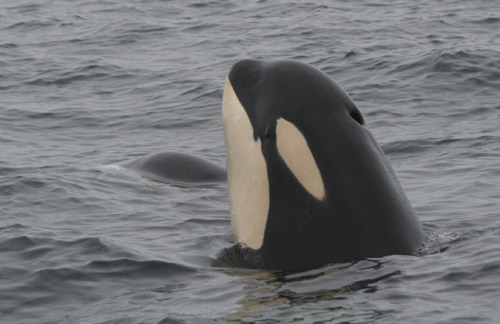 Predation on fish is often very subtle. In this case the whale on the left can be seen with a salmon in the mouth, below the water’s surface. From a distance these whales would have been considered to be engaged in social behavior, rather than feeding. Many times the only signs of predation are a small number of scales left in the water behind the whale after a whale surfaces from a long dive. Photo by M.B. Hanson. 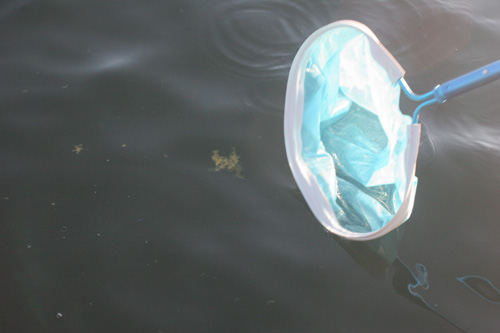 Killer whale feces are typically expelled in a diffuse cloud and sink quickly, so it is usually possible to collect only a small amount of material. Fortunately only a small amount is needed to obtain useable DNA from the samples. Occasionally killer whales feces float, allowing us to collect a greater amount of material. We record information on whether fecal material floats, sinks or is neutrally buoyant, as well as the color and consistency in the water, to later compare these factors to the species of prey determined using genetic methods. In addition to the prey DNA, we are able to obtain killer whale DNA from the samples, which is used both in studies of mating systems, and in determining the gender of individual whales. Most of our samples are from known individuals, but sex of some of the juvenile whales in the population is not known. Genetic analyses are undertaken by Jennifer Hempelmann of the Northwest Fisheries Science Center. Photo by R.W. Baird. 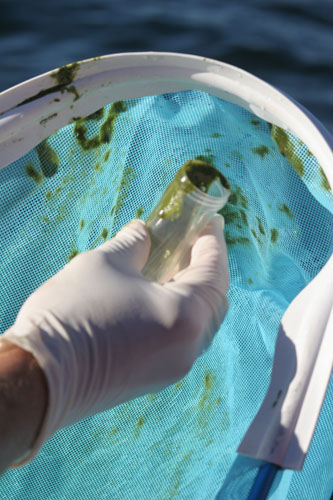 When possible, fecal samples are subdivided with a sub-sample going to Katherine Ayres and Sam Wasser at the University of Washington, for studies of stress hormones. These researchers are also providing sub-samples of fecal material collected in their research for contribution to our study of diet. When sufficient material is available it is also subsampled for multiple genetic tests to assess whether DNA from more than one prey species is present. We compare diet determined from predation samples with that determined genetically from fecal samples, as fecal samples should be less biased in terms of prey species size or behavior. In addition, fecal samples obtained from whales immediately after returning from open waters west of our study area (in the western Juan de Fuca Strait or on the outer Washington or British Columbia coasts) should allow us to examine how diet may vary between the two areas. Photo by R.W. Baird. 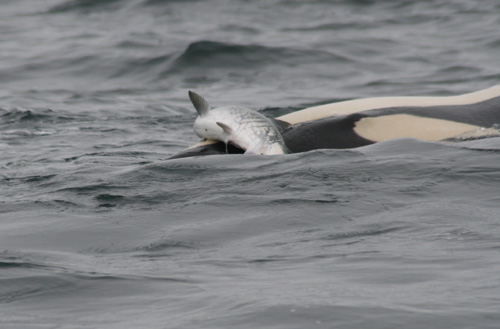 A juvenile killer whale playing with a dead salmon. Killer whale tooth rakes are visible on the side of the salmon. When salmon scales are collected they are first sent to our collaborator John Sneva of the Washington Department of Fish and Wildlife, who is able to determine the species and age of the salmon. Fish scales or bits of flesh are also analyzed genetically both to confirm species, and in the case of salmon, to determine which run of salmon the prey originated from. Photo by M.B. Hanson.

Our field efforts typically involve two trips a year each of ~2-3 weeks duration to the San Juan Islands, based out of the Friday Harbor Labs of the University of Washington. These trips are spread throughout the summer/fall to try to coincide with as many different runs of salmon as possible, and we also undertake sampling in Puget Sound in the fall/winter when the weather and whales cooperate. As much as possible we try to collect prey and fecal samples from all the “southern resident” pods and matrilines. To date we have collected over 180 samples, either fish scales or tissue remains, fecal samples, regurgitation samples, or mucous samples (which likely have a respiratory origin). In September 2007 we spent two weeks in the San Juan Islands and were able to collect 32 samples (12 prey, 19 fecal, and 1 regurgitation sample). Analyses of these samples will be undertaken in the next couple of months.

This research has been funded by the Northwest Fisheries Science Center of the National Marine Fisheries Service as part of their efforts to assess factors that may be responsible for the population decline of “southern resident” killer whales. This population was first listed as Threatened in Canada in 1999 and Endangered in 2001 (see report by Baird 2001) and listed as Endangered in the United States in 2005.

Listen to a story on this work from National Public Radio

We would like to thank Kari Koski and The Whale Museum’s Soundwatch Program for their efforts to disseminate information on this research to the boating public and to whale watching operators and naturalists, as well as Susan Berta and Howie Garrett of the Orca Network for their efforts to education the general public interested in killer whales and whale research.

Reports, publications and conference presentations on this work:

Aspects of this research are currently being written up for publication and have been presented at several conferences and in contract reports.

For more information on this research write to: rwbaird (at) cascadiaresearch.org or brad.hanson (at) noaa.gov