Examination of a dead fin whale that washed up in Lummi Bay revealed that the animal had been struck while alive by a ship and this had been the cause of death. The whale was initially reported drifting south off the Lummi Nation on the morning of 14 May 2006 and washed up later that day. The whale refloated and moved on the evening of 15 May to a more remote location where a thorough examination or necropsy could be conducted.

A team of over a dozen scientists, students, and a veterinary pathologist conducted the examination with the help of members of the Lummi Nation over a 6-hour period during the low tide when the animal was exposed. The participants were members of the Northwest Marine Mammal Stranding Network authorized by NMFS to respond to strandings and included members from Cascadia Research, Washington Department of Fish and Wildlife, and the British Columbia Ministry of Agriculture and Food. Other members of the stranding network has assisted in initial reporting and examination of this whale as well.

The team concluded the cause of death was a result of ship strike due to the presence of both external and internal injuries (bruising and hemorrhaging) to the right side of the animal consistent with a large blunt trauma, internal bleeding, and the otherwise good condition of the animal. Fin whales are known to be vulnerable to impact due to their large size and feeding near the surface. In 2002, three fin whales were recovered in Puget Sound that had died as a result of ship strikes. Two of these came into the Sound wrapped around the bows of ships, one of these on the bow of a tanker arriving at Cherry Point, only a few miles north of where the current fin whale was first spotted.

While fin whales are not commonly seen in Puget Sound and are an endangered species, they are known to occur in coastal and offshore waters off the west coast of the US and Canada. This fin whale may well have been struck and killed some distance from Puget Sound and carried in on the bow a ship. In some instances this has occurred without the knowledge of personnel on the ship and is sometimes only discovered when the ship reaches port.

The stranded fin whale was a male approximately 56 feet long and based on body and testes size was immature and likely somewhere roughly around 4-5 years-old. The stomach was empty and the blubber reserves not very high but this may have been normal for this early in the season, prior to the most productive feeding time. The carcass is on a portion of the Lummi Nation closed to the public and there are potential plans for the tribe to preserve the skeleton.

Fin whales are the second largest animal that ever lived and are second only to the closely related blue whale. They were hunted during the “modern” era of commercial whaling after the development of explosive harpoons and steam-powered catcher boats first allowed whalers to go after these larger and faster species. While largely protected from commercial whaling currently (Japan kills some fin whales under the guise of  “Research Whaling”), they remain endangered today because they have not yet recovered. There have been indications of fin whale populations increasing in some areas and this could contribute to more potential incidences of collisions between ships and whales. 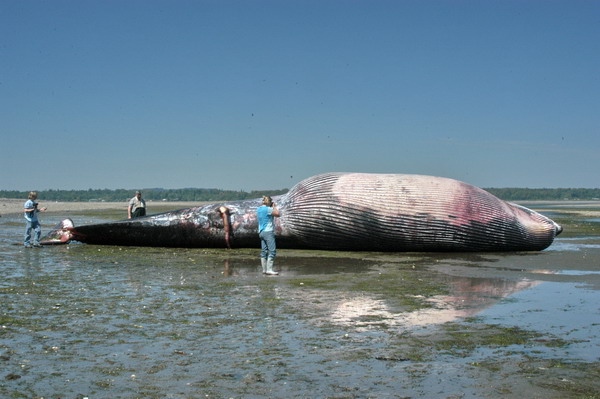 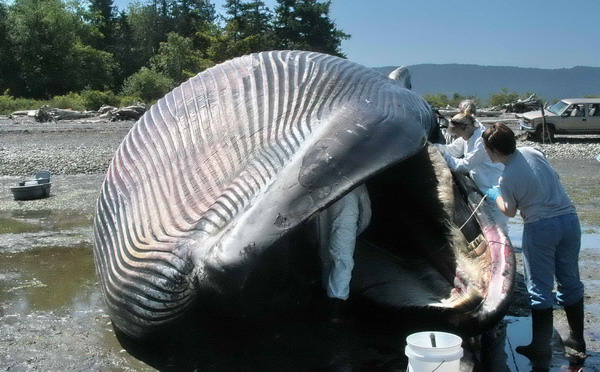 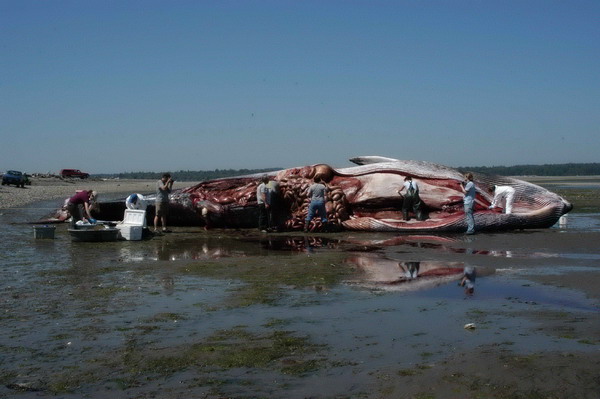