Cascadia Research will be undertaking a 14-day field project off the island of Kaua‘i starting October 7th, 2014. This will be our 11th field project working off Kaua‘i and Ni‘ihau. The primary purpose of the project is to obtain information on movements and habitat use of a number of species of toothed whales through the deployment of satellite tags.

As we do during all of our field projects, we will also be obtaining photos from most species of odontocetes we encounter, to contribute to ongoing studies of residency patterns and social organization and to estimate population sizes, and collecting biopsy samples for toxicology and genetic studies. This is our second project off Kaua‘i this year, and last year we had two similar field projects, one in February and one in July and August, and like those projects we expect to have higher encounter rates than normal since we’ll be working in collaboration with the Marine Mammal Monitoring on Navy Ranges (M3R) program, using the Navy’s hydrophone range off Kaua‘i (see map below) to localize animals. When on the water we will be in constant contact with Navy researchers from the M3R program to help direct us to groups that they are detecting acoustically. This will allow us to confirm the species (to aid in using the acoustic range for research purposes on different species), and should make it much easier for us to find groups of whales and dolphins for tagging, photo-ID and biopsy sampling.

The research team includes Daniel Webster, Brenda Rone, Suzanne Canja, and Robin Baird. This work is being funded by the Living Marine Resources Program of the U.S. Navy. 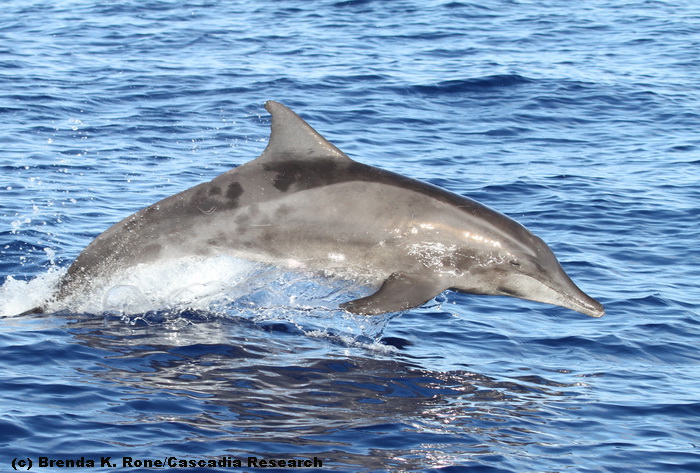 A rough-toothed dolphin leaping, October 16, 2014. Photo (c) Brenda K. Rone. October 17th was our last day on the water for this trip – with Hurricane Ana heading towards the islands we decided to end the trip a few days early. Overall it was a productive trip. We covered 1,573 km of trackline and spent 77.7 hours on the water, had 29 sightings of seven species of odontocetes, and deployed six satellite tags (four of which are depth-transmitting tags). 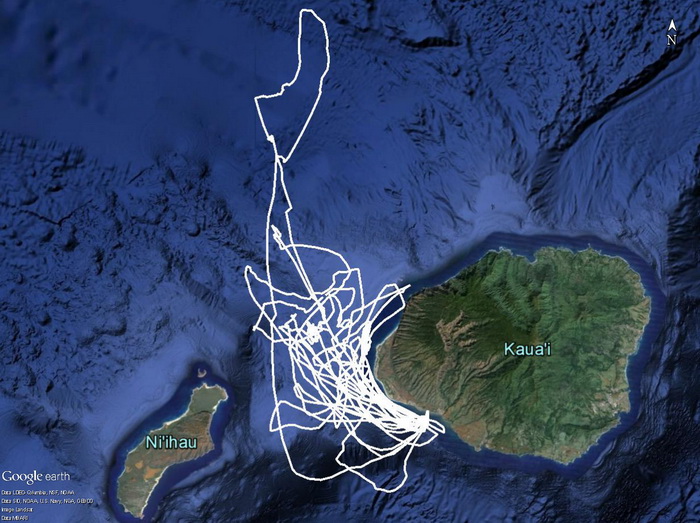 Our tracklines for the trip. 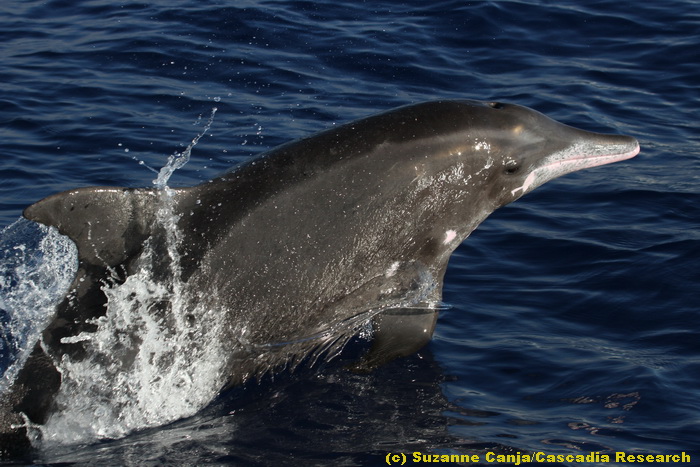 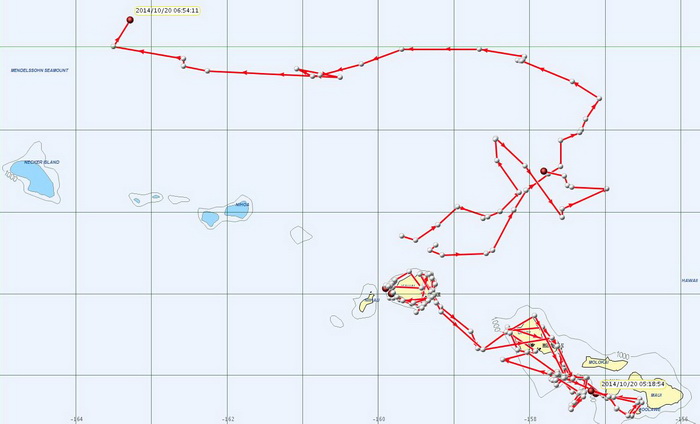 This map shows tracks of the six individuals (of four species) that we tagged during the project, through the morning of October 20th. The point to the northwest is the pilot whale, the point north of O‘ahu is the sperm whale, the two points around Kaua‘i are the bottlenose dolphins, and the two points south of Moloka‘i are the false killer whales. 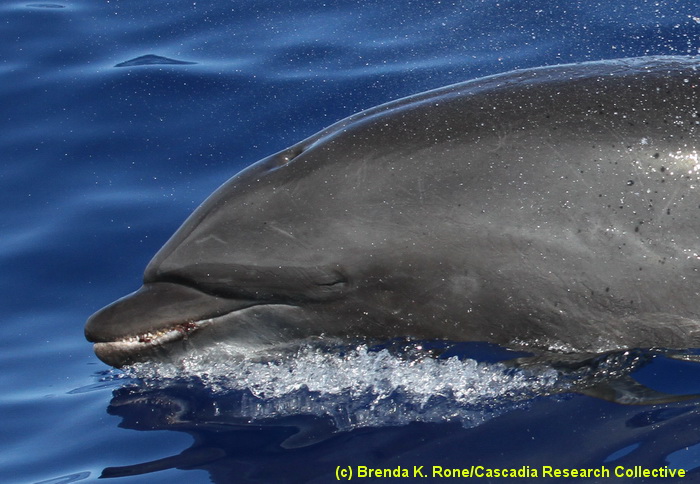 A bottlenose dolphin, October 15, 2014. Photo (c) Brenda K. Rone. In the last three days we’ve had encounters with large groups (~15-30) bottlenose dolphins each day, and have been able to photo-identify most individuals and also deployed two depth-transmitting satellite tags. The teeth of this individual are visible above the gumline, and there are several small stalked barnacles attached to the teeth (purple in color). The indentation along the back of this individual, just behind the blowhole, indicates it is a very robust individual. 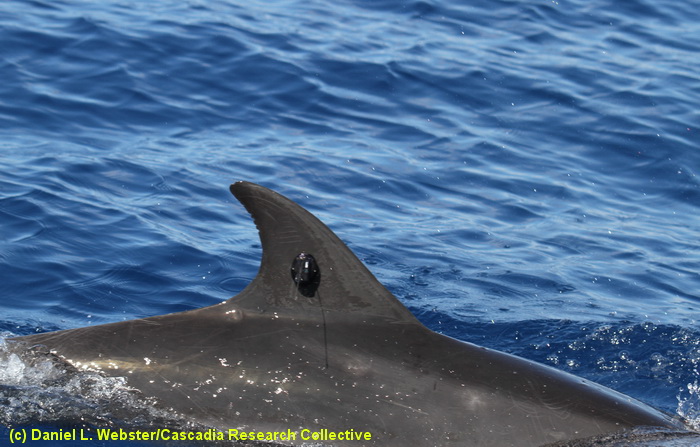 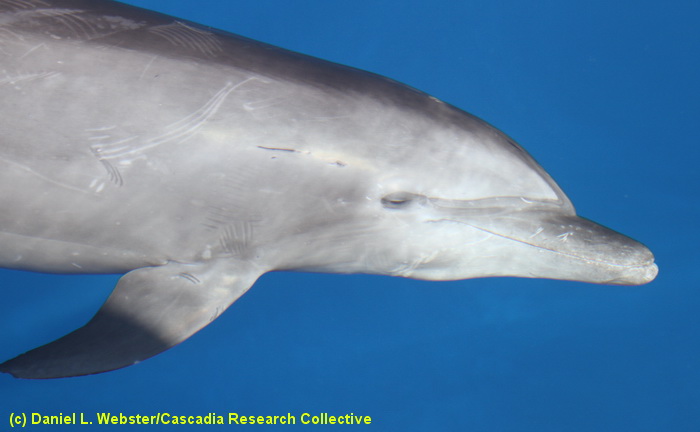 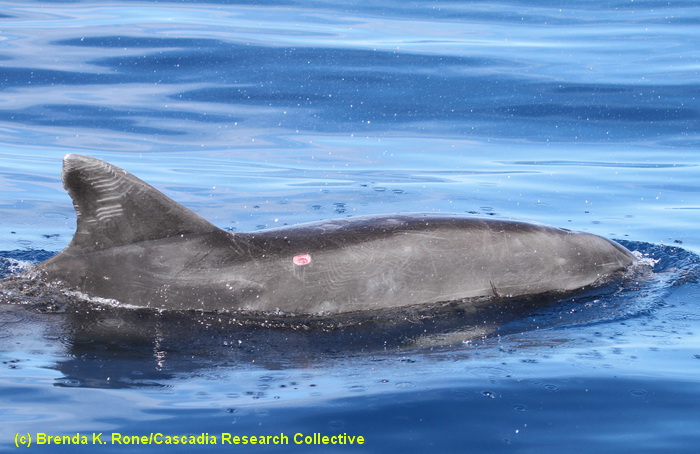 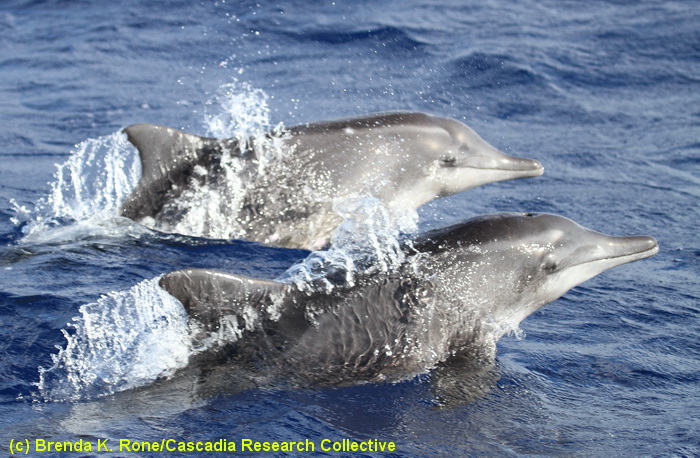 Rough-toothed dolphins, October 11, 2014. Photo (c) Brenda K. Rone. Over the last three days the weather has been sub-optimal, but we’ve had productive encounters with several groups of rough-toothed dolphins, photo-identifying most of the individuals encountered. There is a population of rough-toothed dolphins that appears to be resident to the islands of Kaua‘i and Ni‘ihau, so we suspect many of the individuals will already have been documented off the islands. We’ll use these photos to better understand the social organization of this species as well as examine long-term site fidelity. 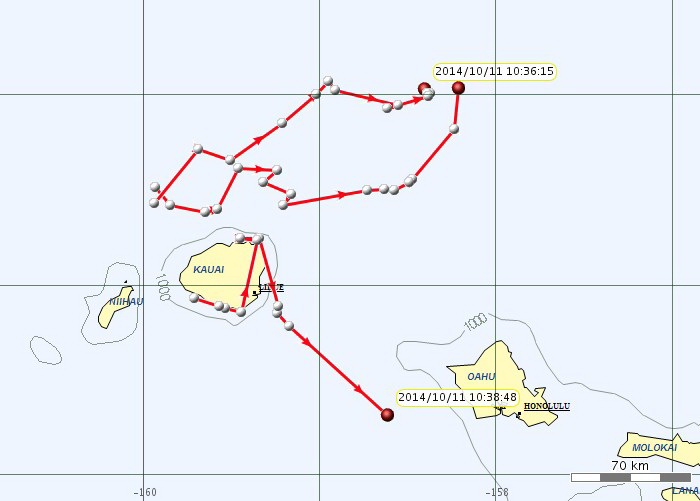 Movements of the three species that we satellite-tagged on October 8th, through the morning of October 11th. We are getting data from all four tags deployed earlier in the week (only three of the four shown as the two false killer whales are close together). The false killer whales (tagged along the south shore of Kaua‘i) spent two days along the south, east and north-east coast of the island, and have now moved to the southeast and were off Waianae, O‘ahu, earlier today. The tagged sperm whale and short-finned pilot whale (both tagged north of the channel between Kaua‘i and Ni‘ihau) have moved to the north and east, and were about 160 km north of the western-most point on Oahu earlier today.

A good start to the field project, in the first two days we had sightings of six species of toothed whales, including sightings of two species we’ve only previously documented off Kaua‘i once in our seven years of field projects off the island (pygmy killer whales and sperm whales), and an encounter with our highest priority species, false killer whales. 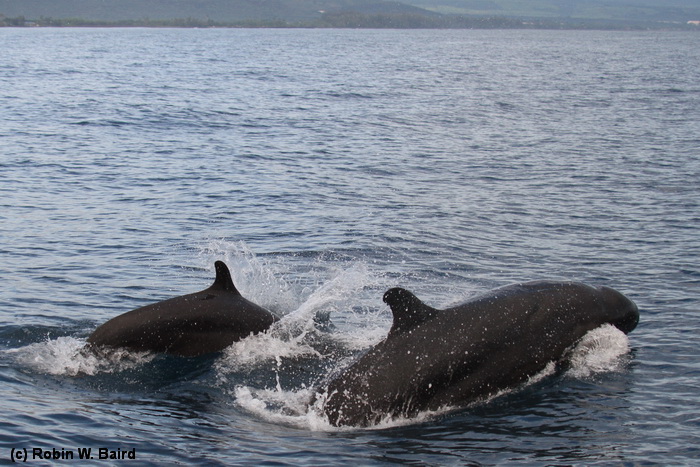 A mother/calf pair of false killer whales, October 8, 2014. Photo (c) Robin W. Baird. We encountered a dispersed group of about 15-20 individuals late in the day, were able to photo-identify most of the individuals present and also deployed two satellite tags to track movements. This group is part of the endangered main Hawaiian Islands insular population, identified as “cluster 1” individuals, the most commonly encountered group from this population. This is the first time we’ve ever seen the main Hawaiian Islands population off Kaua‘i, although they have been recorded here previously. 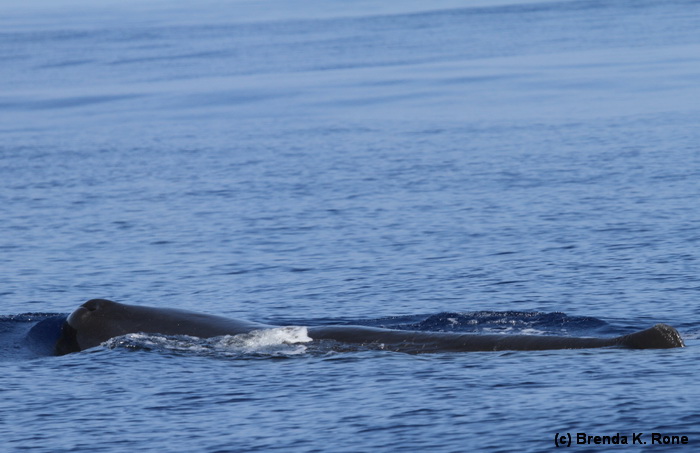 A sperm whale north of Kaua‘i, October 8, 2014. Photo (c) Brenda K. Rone. The calm seas today allowed us to work further north than we are typically able to, and we were directed to a group of sperm whales acoustically detected by the M3R researchers. 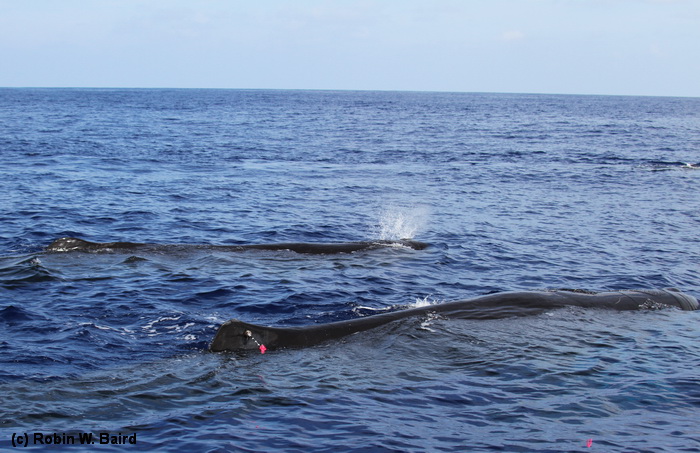 Deploying a satellite tag on a sperm whale, October 8, 2014. Photo (c) Robin W. Baird. This photo shows the tag and deployment arrow as it contacts the dorsal fin of the close individual – the arrow then falls away and is recovered. This tag was a depth-transmitting satellite tag, so we are hoping to get both location and dive data from this individual. We’ve previously tagged nine sperm whales (from seven groups) in Hawaiian waters, but all off of Kona. 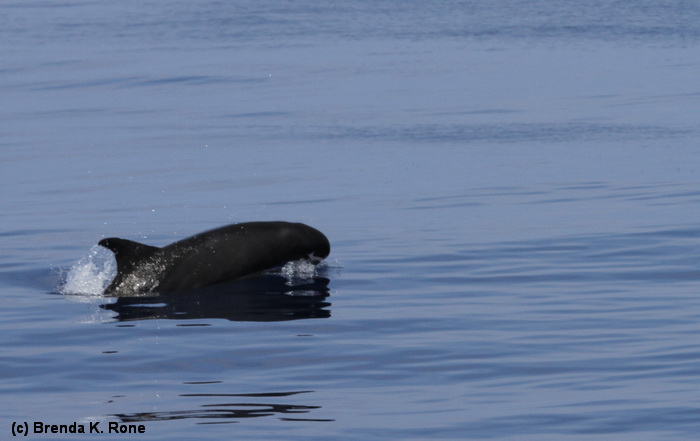 A pygmy killer whale, October 8, 2014. Photo (c) Brenda K. Rone – this is only the second time we’ve documented pygmy killer whales off Kaua‘i or Ni‘ihau – the last time was during our May/June 2003 project! We encountered only a small group, four individuals, but were able to obtain identification photos of several to compare to our photo-ID catalog of this species. There are resident populations of this species off O‘ahu and Hawai‘i Island, but little is known about them off Kaua‘i or Ni‘ihau. 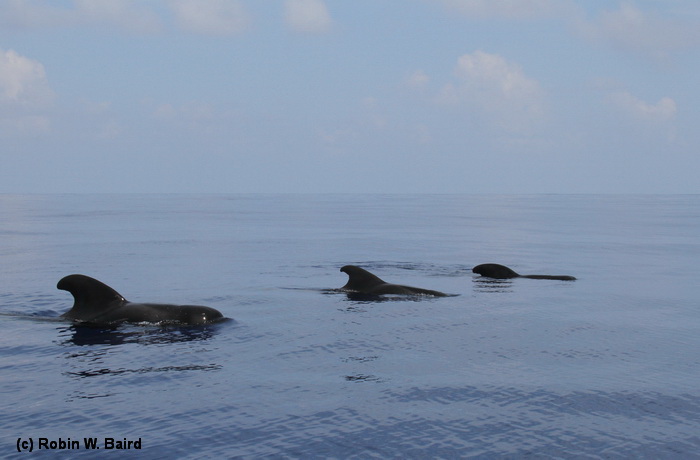 A group of short-finned pilot whales off Kaua‘i, October 8, 2014. Photo (c) Robin W. Baird. We also encountered a large group of short-finned pilot whales in deep water (>4,000 m) to the north of the island. We were able to deploy one satellite tag and obtain identification photos of more than 30 individuals. From the combination of photo-identification and tag data we will be able to assess whether the group is part of the resident insular population, or the open-ocean population. 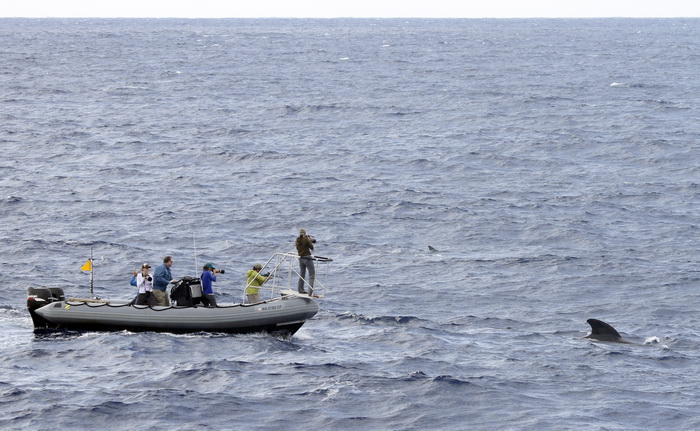 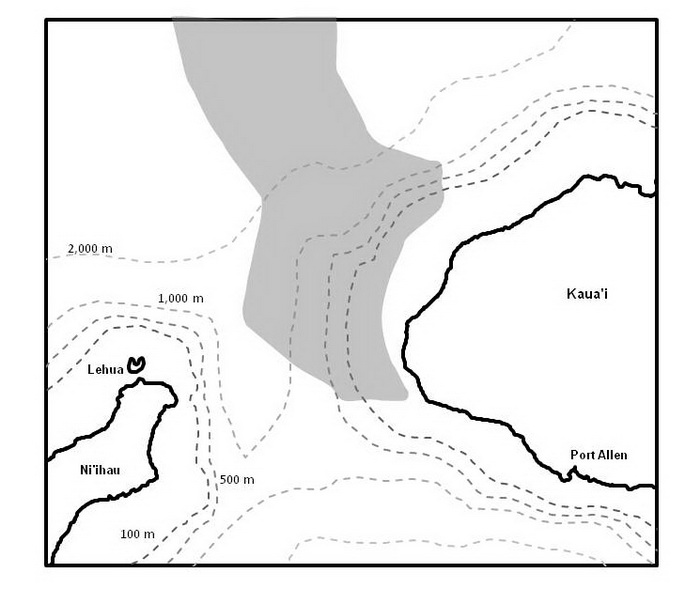 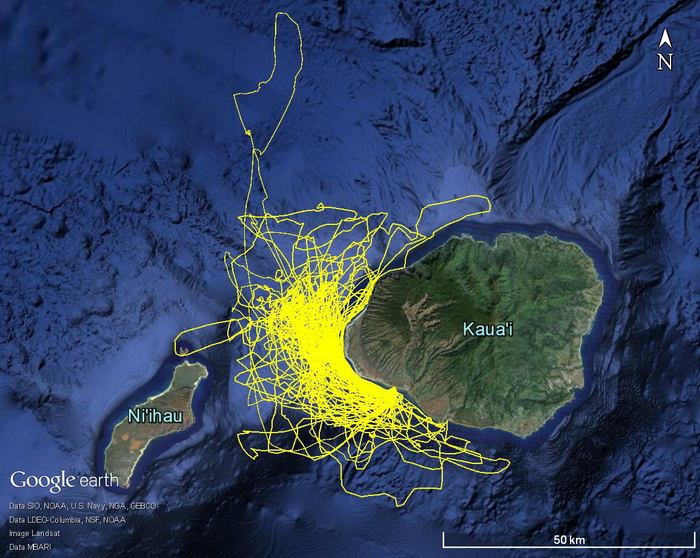 Our survey effort off Kaua‘i and Ni‘ihau over the last three years – this map shows tracklines from projects in 2012, 2013, and earlier in 2014.