We will be undertaking a 14-day field project off Hawai‘i Island starting November 2, 2015. This project is funded by the NOAA Fisheries Bycatch Reduction Engineering Program (BREP) and is focused primarily on false killer whales. Our primary goal for the field effort is to find and deploy LIMPET satellite tags on pelagic false killer whales, to be able to assess their movements over time as they relate to longline fishing effort, to help inform best fishing practices in ways that might not only reduce bycatch but also depredation of catch. Like all of our field projects though, we will work with most species we encounter. We have funding from Dolphin Quest for LIMPET satellite tags that we hope to deploy on some of the rarer species of odontocetes in Hawaiian waters (e.g., melon-headed whales, killer whales, sperm whales) to track their movements and behavior, and from the Pacific Islands Fisheries Science Center for satellite tags to help determine whether species like short-finned pilot whales and Blainville’s beaked whales change their movements or diving patterns in response to El Niño. Since we’ll be trying to work further offshore than usual, to increase our chances of encountering pelagic false killer whales, we are more likely to be able to work with some of the pelagic populations that pass by the islands.

The research crew for this project will include Daniel Webster, Annie Douglas, Kim Wood and Robin Baird, all from Cascadia, as well as Deron Verbeck and Colin Cornforth and a number of volunteers. 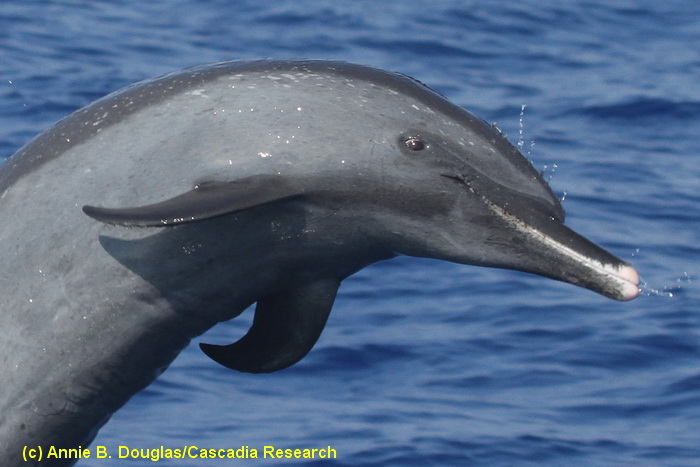 Sunday November 15th was the last day of our field project. Over the last two weeks we covered over 2,300 kilometers of trackline off the island, encountered 10 species of odontocetes (and saw a few distant humpbacks), collected two biopsy samples, took over 19,000 photos for individual photo-identification catalogs of six different species, and deployed satellite tags on eight individuals of three species (one false killer whale and one Cuvier’s beaked whale, and six pilot whales from four different groups). Overall a very successful trip. While this was our last field effort in Hawai‘i this year, we are hoping to continue to get location data from the tags over the next few months and into the new year.

This photo is of a pantropical spotted dolphin leaping, November 15, 2015. Photo (c) Annie B. Douglas 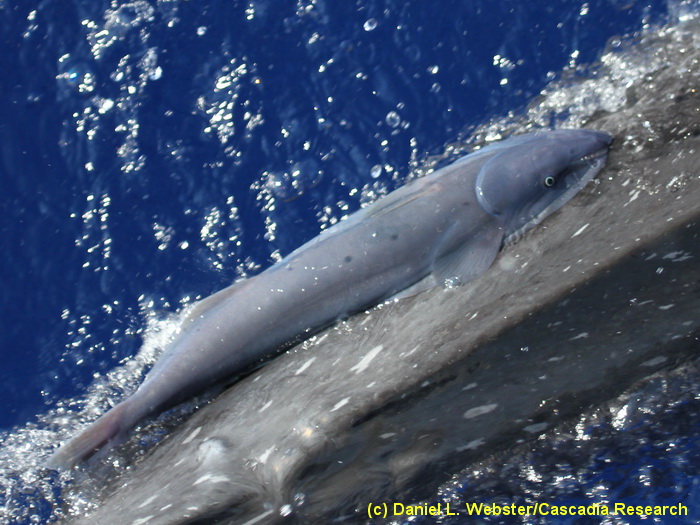 While some people think remoras may be benign hitchhikers, like this one on a pantropical spotted dolphin, the remoras can do incredible damage to the skin, and the dolphins usually try to get rid of them. Photo (c) Daniel L. Webster. 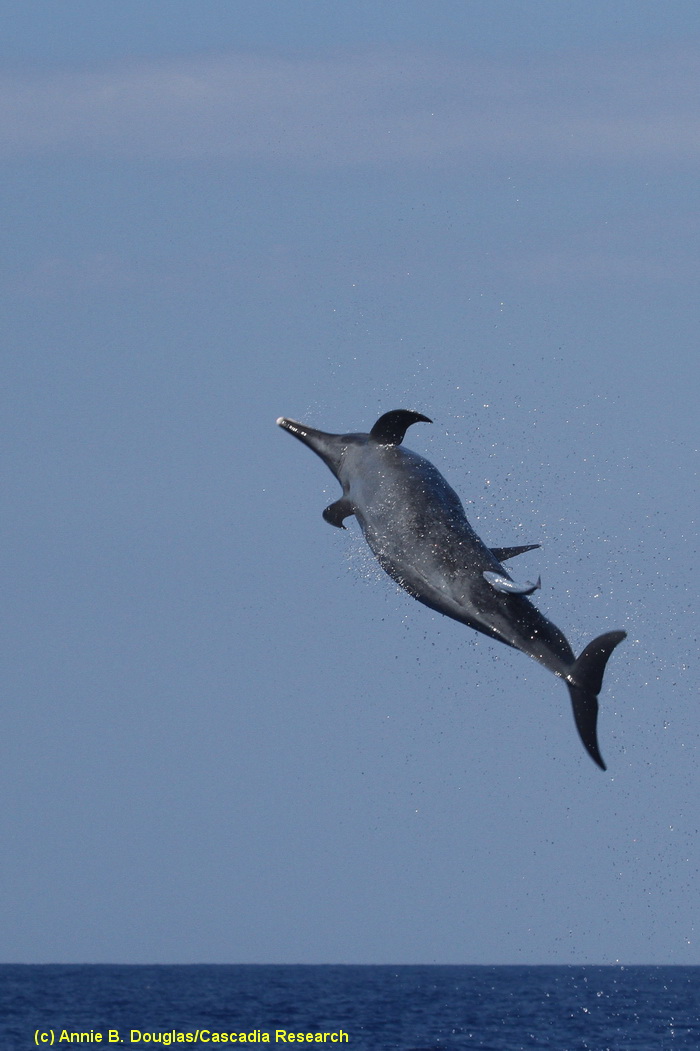 This is a photo of the same spotted dolphin leaping to try to get rid of the remora. Photo (c) Annie B. Douglas. 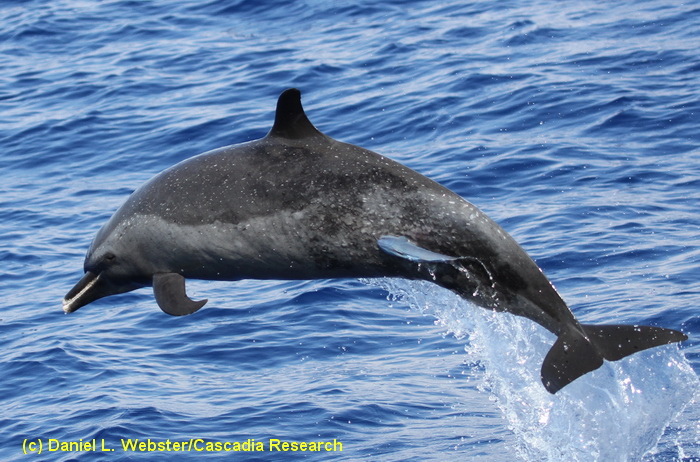 This photo shows the discoloration of the skin and a number of lesions associated with “persistent remora damage”. Photo (c) Daniel L. Webster 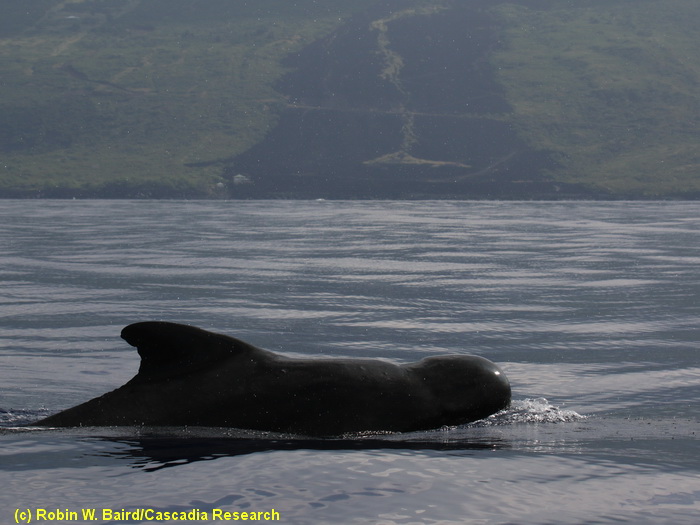 On our last two days we were able to deploy two additional satellite tags on pilot whales, giving us four different groups that we are tracking, to try to assess movements and behavior in relation to El Niño. 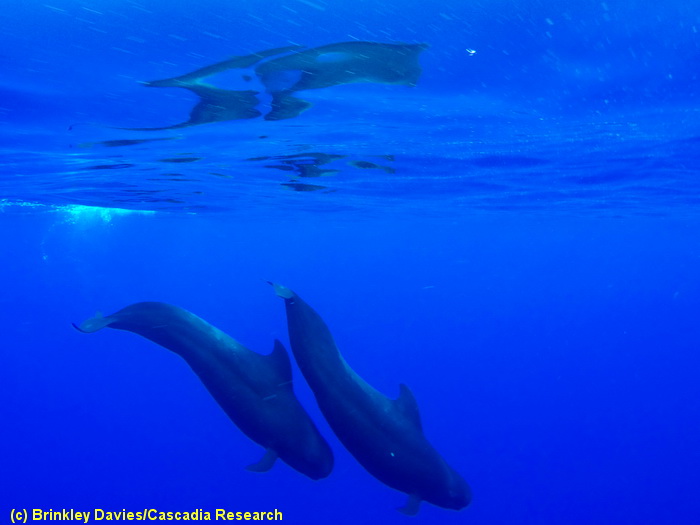 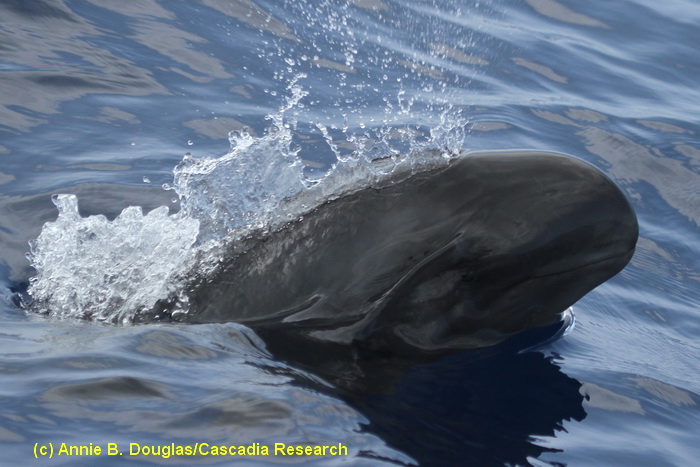 Today we encountered our 10th species of odontocete for the trip, a group of 11 pygmy killer whales. We recognized many of the individuals present, part of the Hawaii Island resident population. We were able to get an acoustic recording of the group, collected one biopsy sample for genetic studies, and obtained ID photos of all 11 individuals. More information on pygmy killer whales at our web page for this species. This individual is a juvenile, not yet showing any of the white pigmentation or scarring typical for this species. Photo (c) Annie B. Douglas 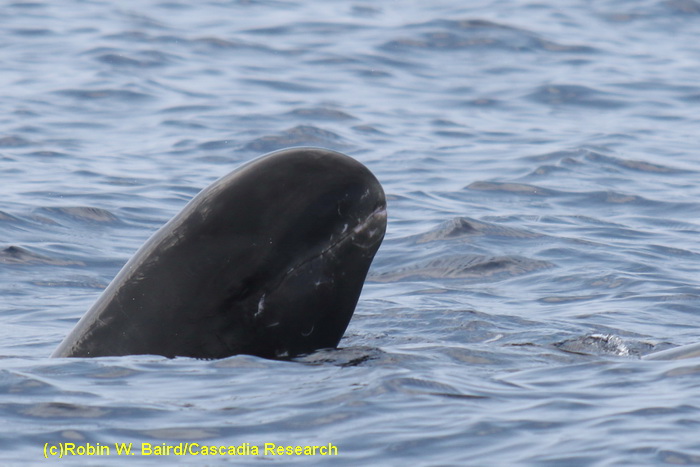 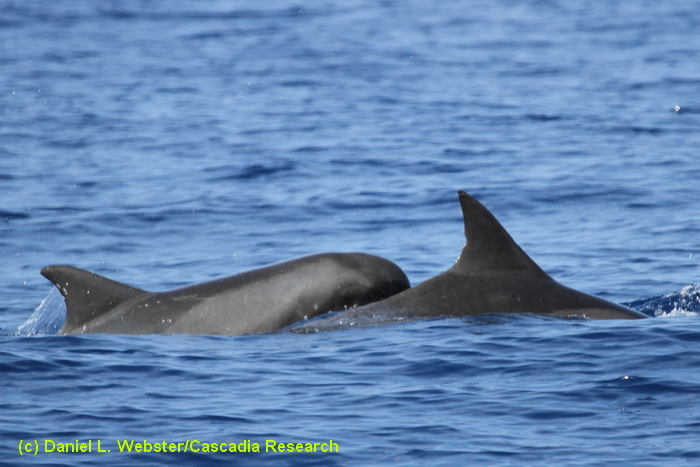 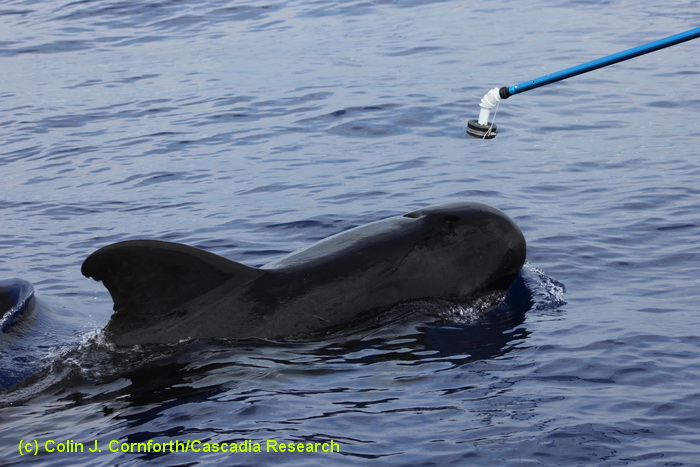 We also encountered a group of pilot whales that we had seen earlier in the trip – this photo shows us collecting a “breath sample” – we send these samples to Kristi West at Hawaii Pacific University who is using them to isolate stress and reproductive hormones from the individuals. Photo (c) Colin J. Cornforth 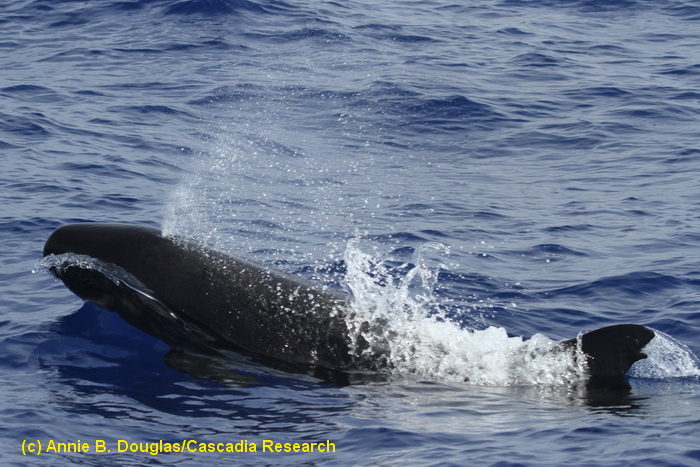 Today we encountered our highest priority species, false killer whales. We immediately recognized several individuals in the group, members of “Cluster 3” from the endangered main Hawaiian Islands population. This is the same group that included HIPc198, the false killer whale that was found dead at the south end of Hawai‘i Island just five days ago. The individual in this photo is an adult male, based on the very blunt head, first documented off O‘ahu in 2003 and seen many times since. Photo (c) Annie B. Douglas 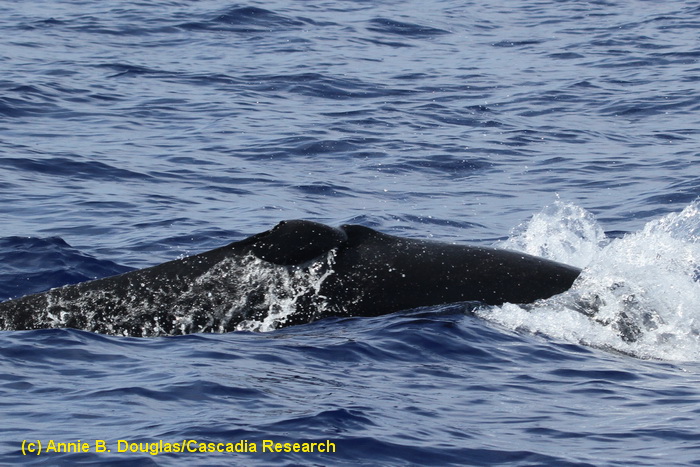 This individual is HIPc166 in our catalog, first seen in 2003 off O‘ahu. HIPc166’s fin has a line injury on the leading edge of the dorsal fin that has caused it to bend all the way over to the right – the injury was probably caused by an interaction with fishing gear. If you are interested in more information on false killer whale dorsal fin injuries and fishing gear interactions check out a paper we published on this subject last year. Photo (c) Annie B. Douglas 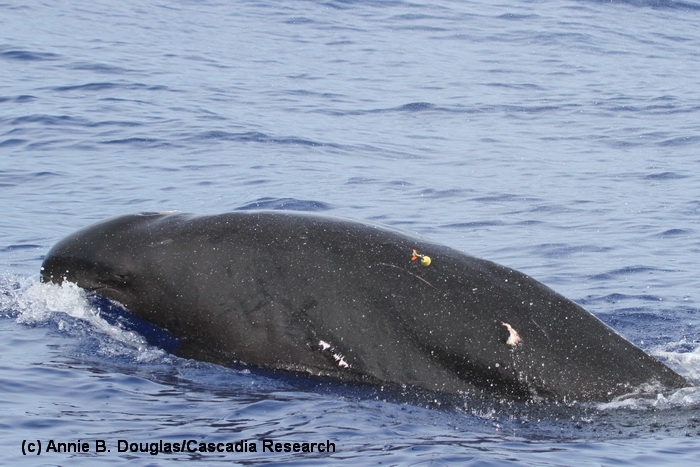 HIPc177, an adult female first documented in 2003 off O‘ahu. When first seen she was missing her dorsal fin, and based on scar tissue along the ridge of the back the fin was likely cut off by a line. Although she had a young calf with her when she was first seen, the calf was missing by the next time she was encountered, and she is not known to have a calf since. Today we obtained a skin and blubber biopsy of HIPc177, to examine stress and reproductive hormones as well as genetics. The biopsy arrow Photo (c) Annie B. Douglas 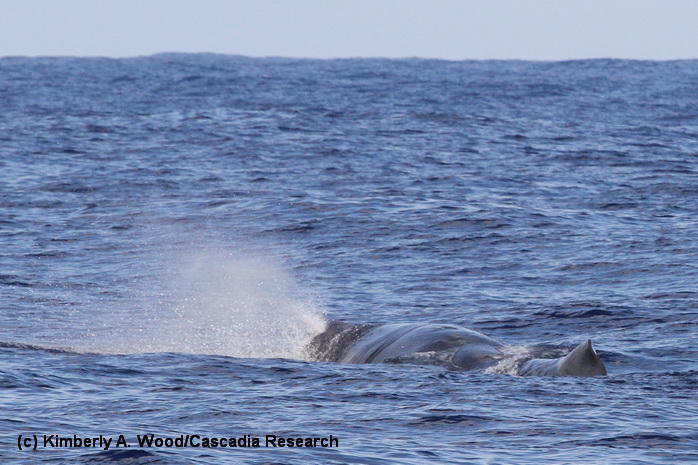 We also encountered a lone adult male sperm whale offshore, our first sperm whale for the trip. For more information on sperm whales in Hawaiian waters see out web page for this species. Photo (c) Kimberly A. Wood 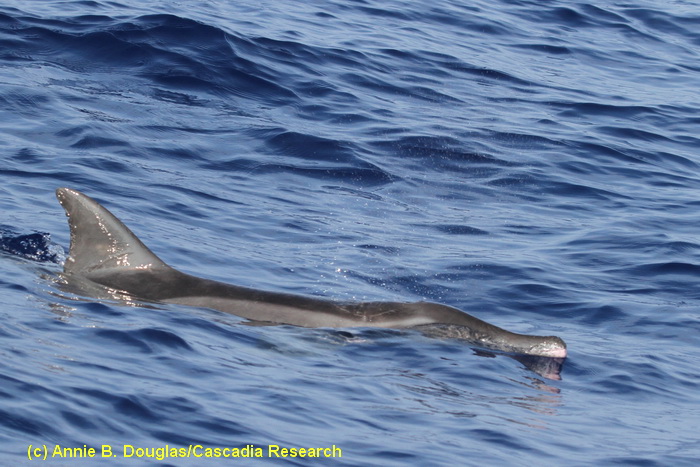 The last few days have been very quiet, with no whale or dolphin sightings on either the 7th or 8th, despite covering 354 kilometers off the Kona coast. Our only “whale” sighting those two days was a whale shark, that circled our boat for a few minutes. Our cetacean luck improved today, with two sightings of rough-toothed dolphins, and another group of short-finned pilot whales. We were able to deploy a satellite tag on an individual in the pilot whale group and got identification photos of the rough-toothed dolphins to compare to our photo-identification catalog of this species. Photo (c) Annie B. Douglas. 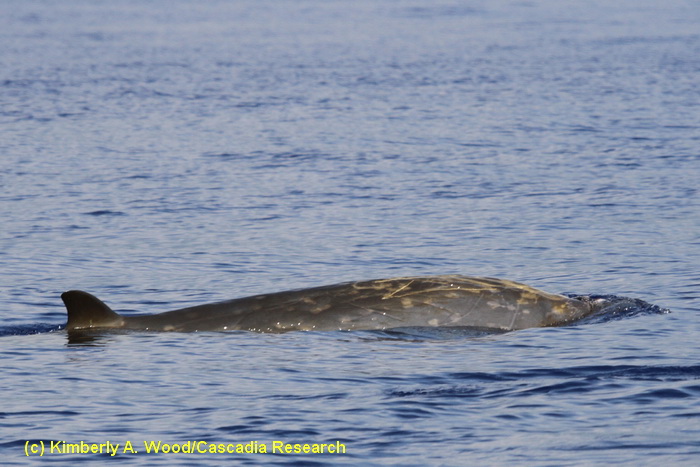 A good encounter with a group of seven Blainville’s beaked whales off the south Kona coast today, a group from the resident island-associated population. This photo is of an adult male from today – although the erupted teeth are not visible, it is possible to determine the sex based on the large number of linear scars, caused by males fighting each other. Photo (c) Kimberly A. Wood 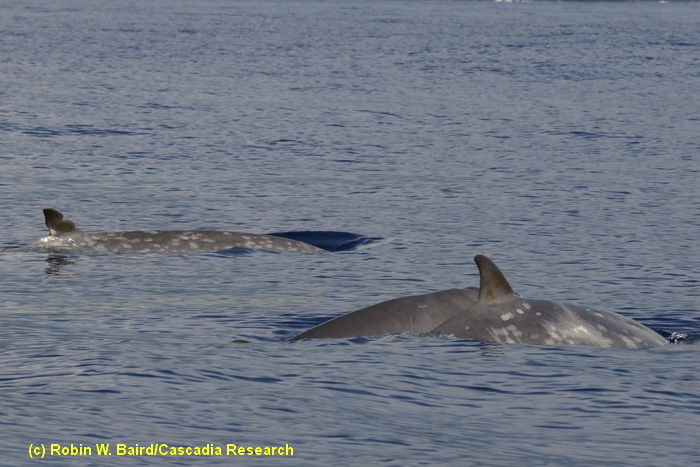 We were able to get good identification photos of all seven individuals – two are ones we easily recognize – HIMd007 (the left individual in this photo), first documented off the island in March 1997 by Dan McSweeney, and HIMd036, first documented in 2002. We’ll be taking the other individuals through our photo-identification catalog to see if we recognize them. Photo (c) Robin W. Baird 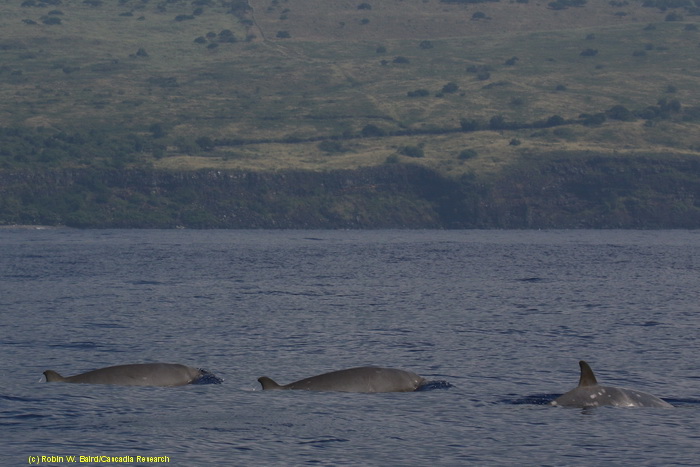 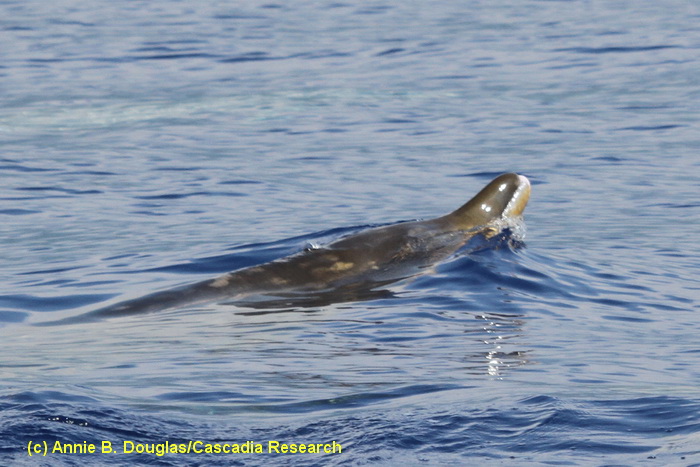 Blainville’s beaked whales typically show the tip of their head as they surface – this individual is an adult female, with no visible teeth. Photo (c) Annie B. Douglas 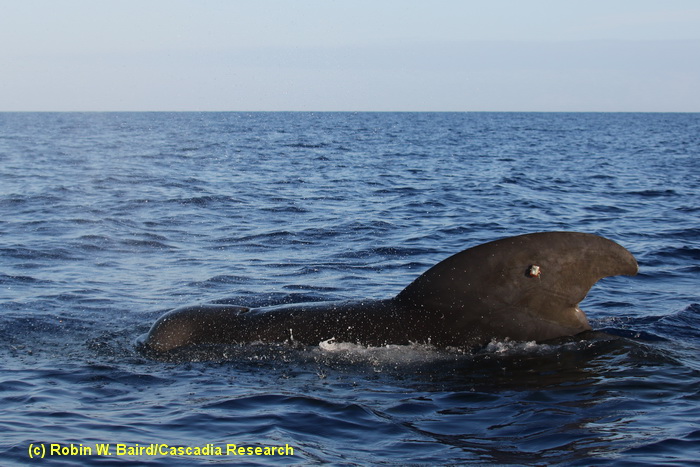 Today we encountered two different groups of short-finned pilot whales, and deployed three LIMPET satellite on individuals in the group, to track their movements. These groups are part of the resident island-associated population, and we have movement information from them over the last seven years – this year is a strong El Niño year, so we are hoping to assess whether movement patterns vary due to the oceanographic influence of the El Niño. This is one of the adult males tagged today, with the LIMPET tag visible on the dorsal fin. Photo (c) Robin W. Baird 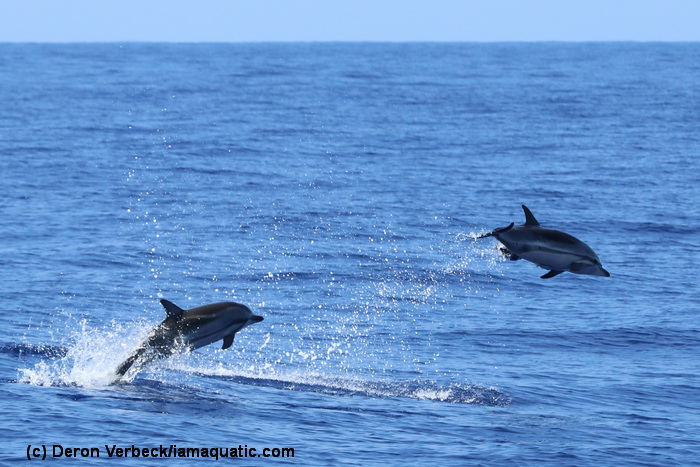 Yesterday we also encountered a group of pilot whales, as well as a larger group of striped dolphins. Photo (c) Deron Verbeck 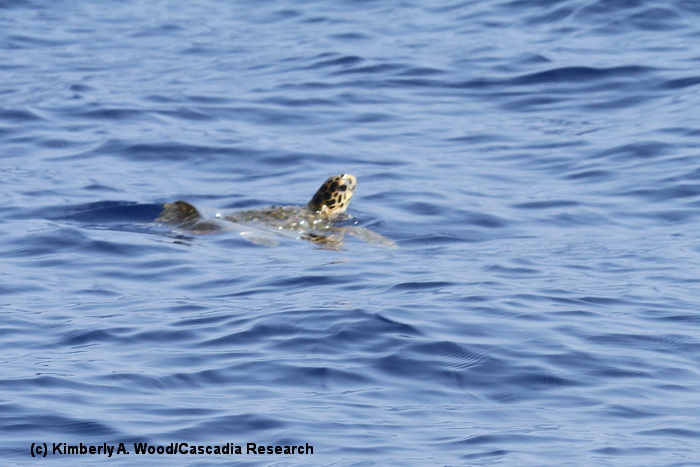 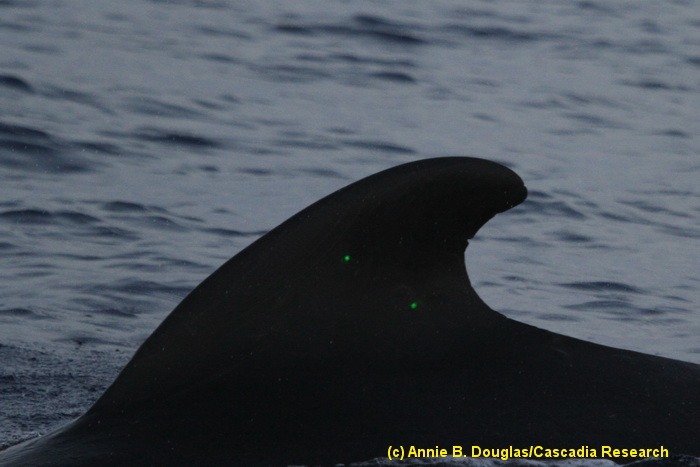 An adult male short-finned pilot whale, November 3, 2015. The two green dots on the dorsal fin are from a laser photogrammetry system – the two dots are exactly 15 cm apart, so we can use these to measure the size of the dorsal fin of individuals, and examine growth as well as estimate total body size. Photo (c) Annie B. Douglas 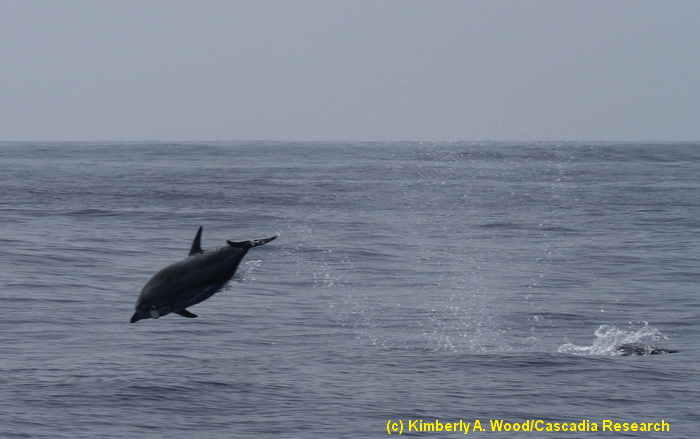 A striped dolphin porpoising – striped dolphins in Hawai‘i are typically found in deep offshore waters, and avoid boats, like this one. November 3, 2015. Photo (c) Kimberly A. Wood 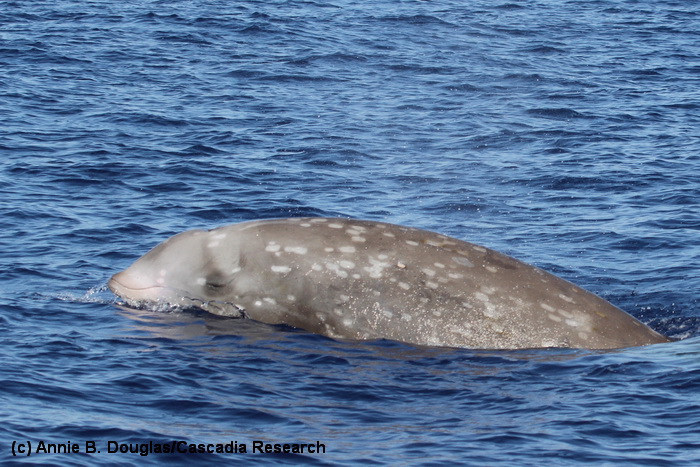 A good start to the trip – our first encounter was with a group of three Cuvier’s beaked whales in 3,400 m depth, about 22 kilometers offshore. There is a resident population of Cuvier’s off the island, and we were able to get good identification photos of all three individuals to compare to our catalog. This is an adult female Cuvier’s, based on the large number of cookie-cutter shark bites (which accumulate with age), and the lack of erupted teeth. Photo (c) Annie B. Douglas. 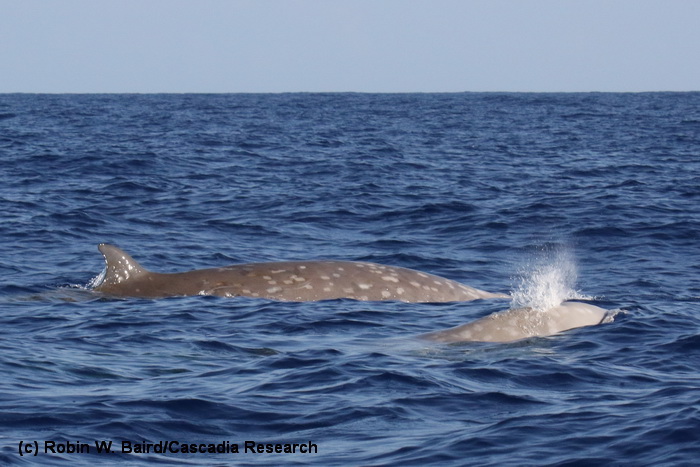 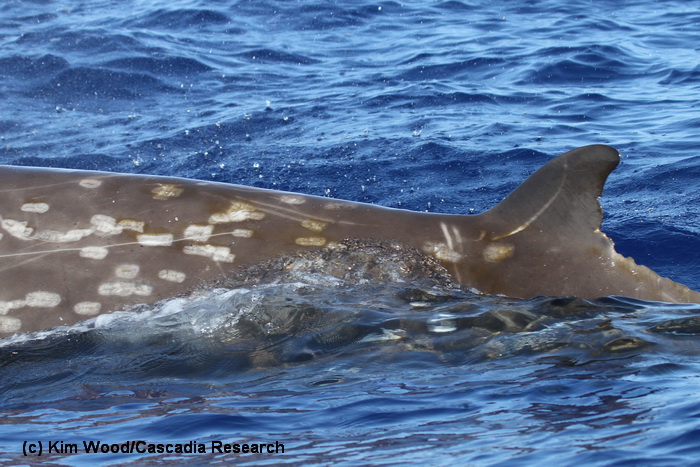 The highlight of the encounter was deploying a depth-transmitting LIMPET satellite tag on one of the individuals – this photo shows the individual, a very distinctive adult female, just prior to being tagged. Photo (c) Kimberly A. Wood 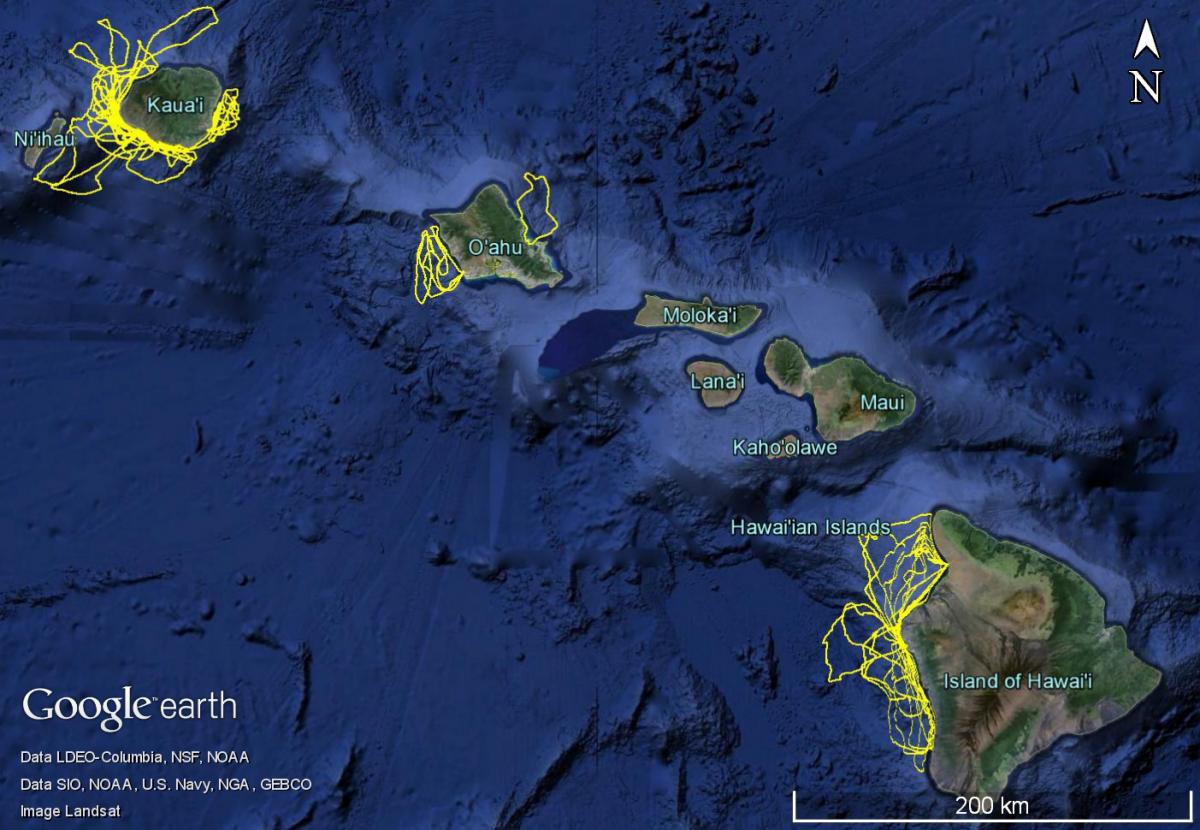 Our survey effort in Hawaiian waters so far in 2015 – we are hoping to expand the effort further offshore of Kona during this trip.

All photos are copyrighted and should not be used without permission (contact Robin Baird at rwbaird (at) cascadiaresearch.org for permission).

Like us on Facebook page if you want to receive notices of when information is posted and updates on other Cascadia projects.