From February 16-20, 2011, we participated in a field project off the island of Kaua‘i, our first field effort in Hawai‘i this year and the fourth time we’ve worked off Kaua‘i (with previous trips in 2003, 2005 and 2008). This cruise was organized by Naval Facilities Engineering Command, Pacific (NAVFAC PAC) and sponsored by Commander, Pacific Fleet – we were able to join the cruise with three goals: obtain photos of various species of odontocetes to contribute to our long-term photo-identification catalogs, obtain biopsy samples for genetic studies being undertaken by collaborators, and deploy satellite tags to examine movements and habitat use. We were using the 96′ R/V Searcher and a 15′ rigid-hulled inflatable (RHIB) to launch from the Searcher when weather conditions were suitable. The area off Kaua‘i and Ni‘ihau is particularly of interest because it is the primary area where the U.S. Navy undertakes training exercises in Hawai‘i, and our work is attempting to learn more about the populations of toothed whales and dolphins that utilize the area. 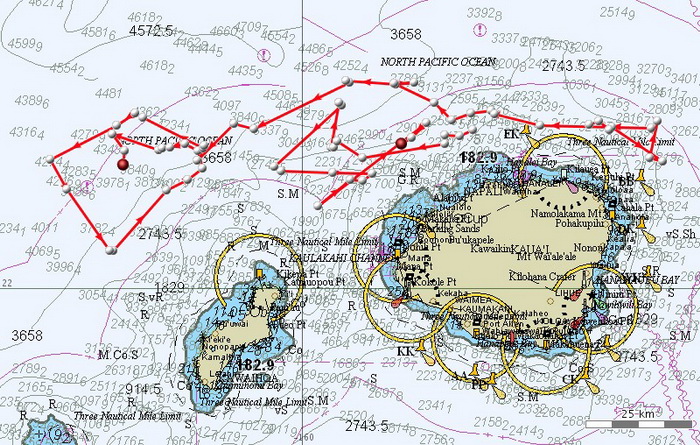 We launched the RHIB in Hanalei Bay for our last day on the water but the winds did not cooperate today – they had shifted from southerly to easterly, so we were not able to get into deep water off the north shore of Kaua‘i. We did encounter two groups of bottlenose dolphins however and were able to get ID photos of some of the individuals. We ended the trip in Port Allen, and hope we will continue to get information on the movements of the tagged whales over several months. Our next field project in Hawai‘i will be in May off the island of Hawai‘i. 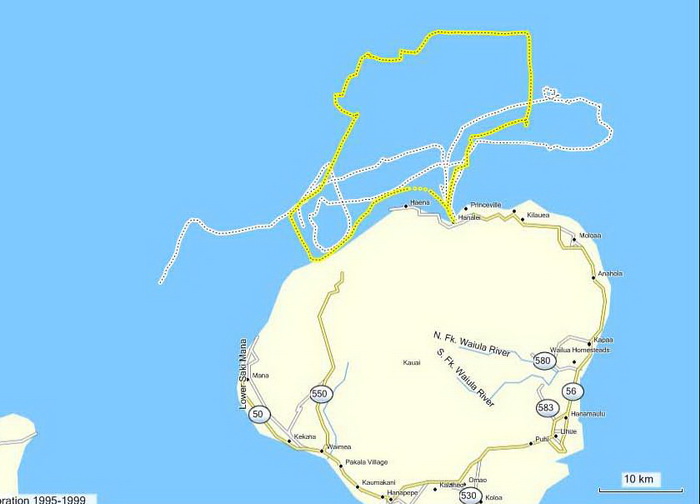 Map showing the 324 kilometers of search effort covered by the RHIB over four days (the R/V Searcher covered a much larger area). The 120 kilometers covered on February 19th are highlighted.

This morning NAVFAC PAC coordinated a plane used for aerial surveys of marine mammals (surveys undertaken by Joe Mobley/HDR) – early in the morning the aerial survey crew spotted a group of pilot whales that turned out to be one of the sub-groups that we had encountered the day before. Shortly after we encountered another group of rough-toothed dolphins, the seventh sighting of this species in three days. 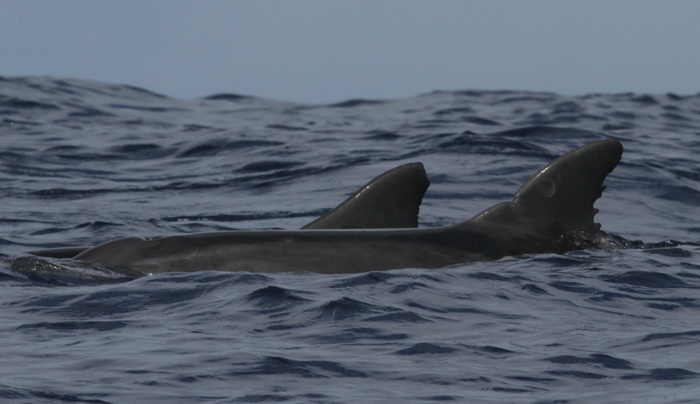 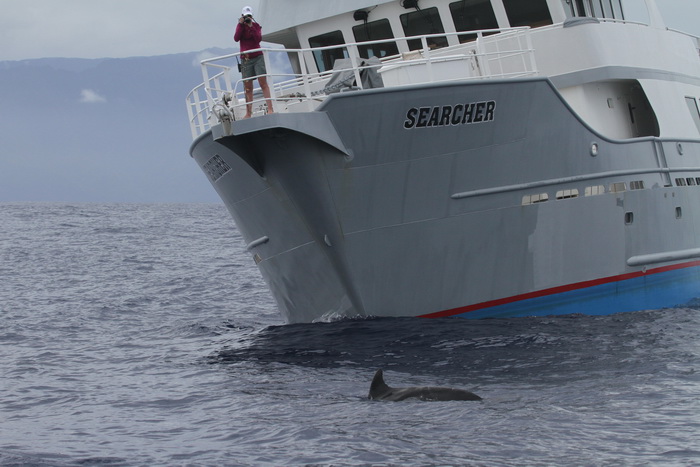 Later in the day the aerial survey crew spotted another group of pilot whales, approximately 13 kilometers offshore, and we were able to deploy an additional satellite tag on an individual in this group. 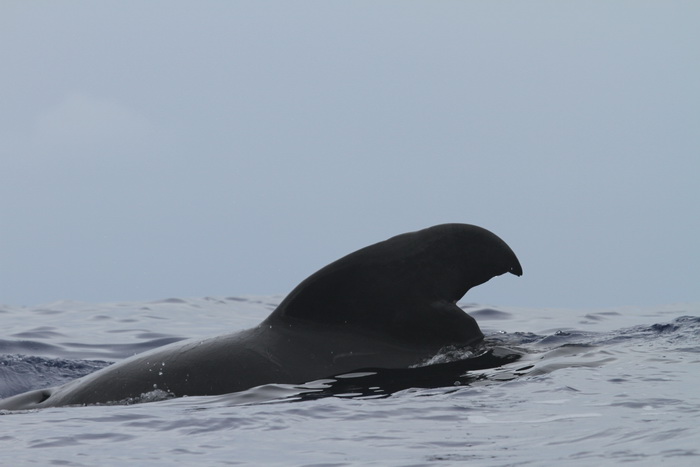 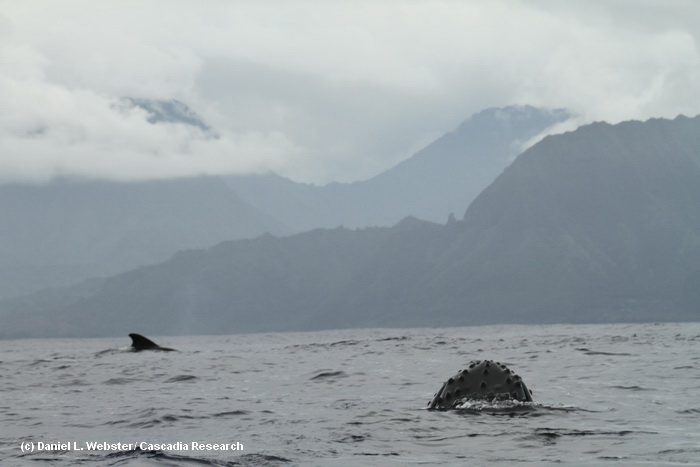 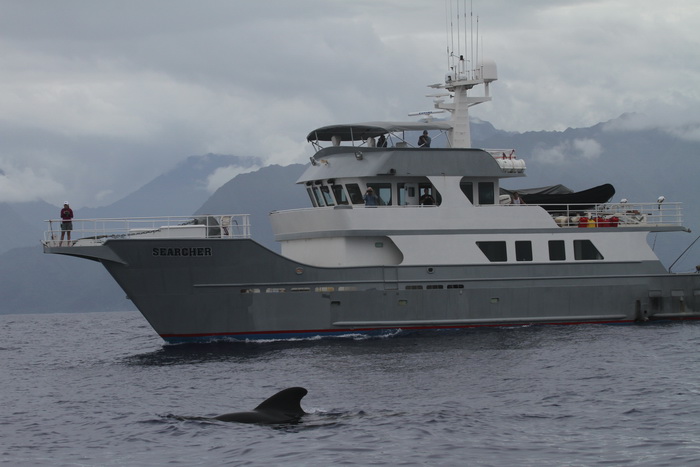 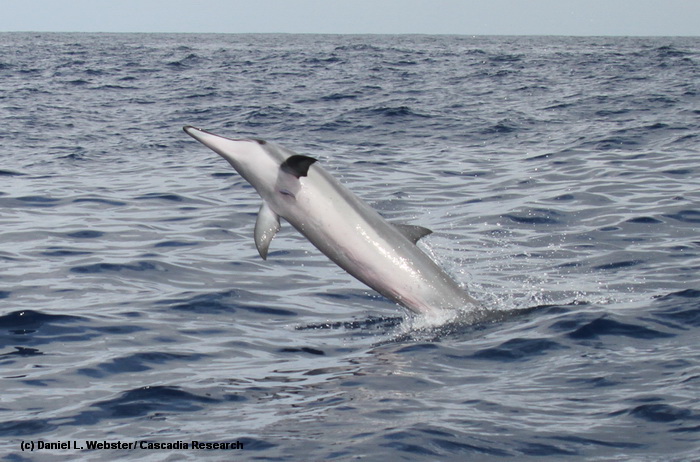 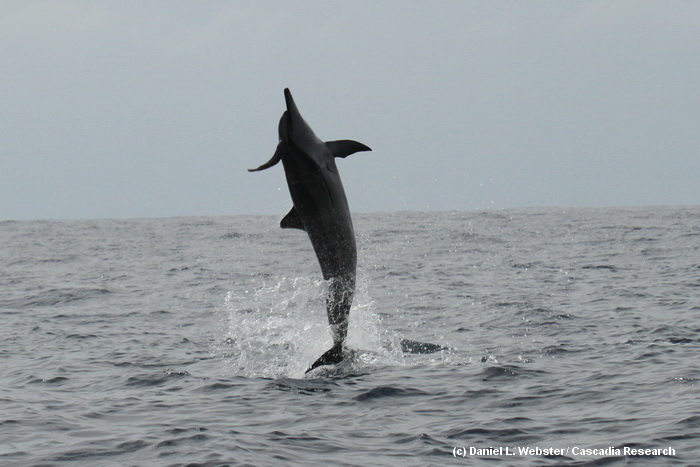 Spinner dolphin spinning, trying to remove both the large remora on the side of the head, and a small remora between the flippers, February 19, 2011. Photo by Daniel Webster

Today we covered 120 km in the RHIB before returning to Hanalei Bay.

Launching the RHIB while the Searcher was still at anchor in Hanalei Bay, we actually had our first odontocete sighting of the day from the RHIB, another group of rough-toothed dolphins, and were able to obtain ID photos of the individuals present and obtain two more genetic samples. 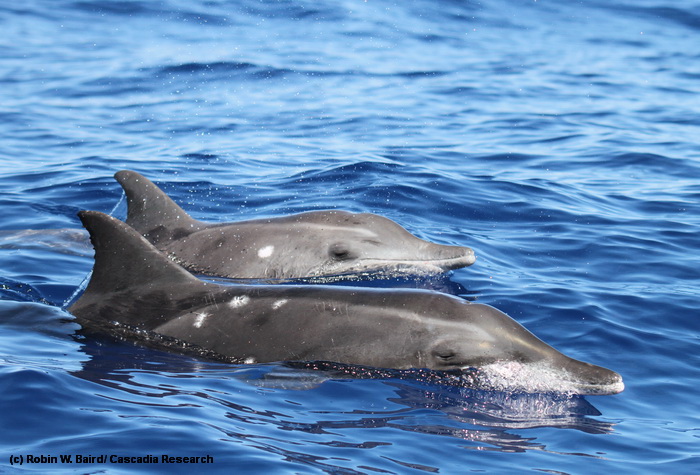 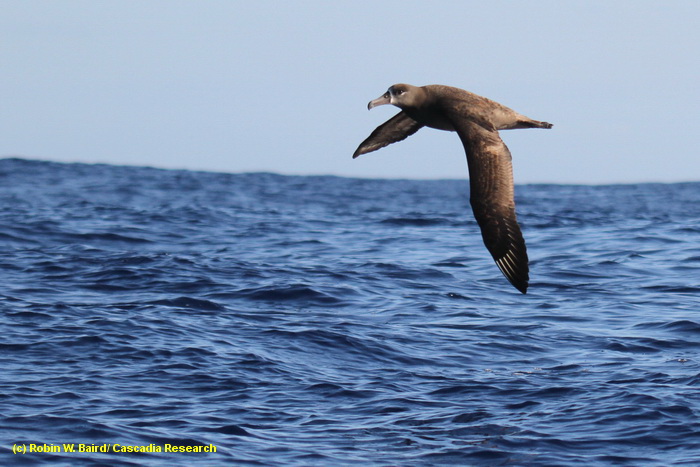 After two more rough-toothed dolphin sightings (this species is very common in deep waters off Kaua‘i!) the Searcher sighted short-finned pilot whales, two sub-groups about 700 m apart. We were able to deploy satellite tags on one individual in each sub-group, and also photo-identified most of the individuals present and obtained two genetic samples. We’d only satellite tagged one pilot whale off Kaua‘i in the past (in July 2008), so these tags will provide significant new information on movements and habitat use of this species around Kaua‘i and Ni‘ihau. As well as location information one of the tags deployed also records and transmits information on dive depth. For more information on short-finned pilot whales in Hawaii see our web page for that species. 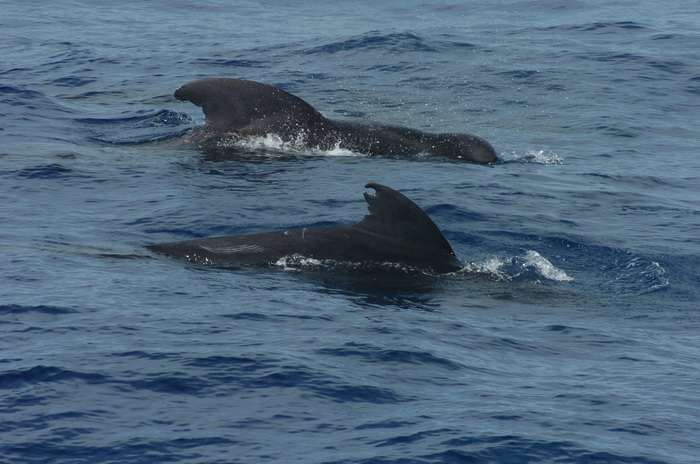 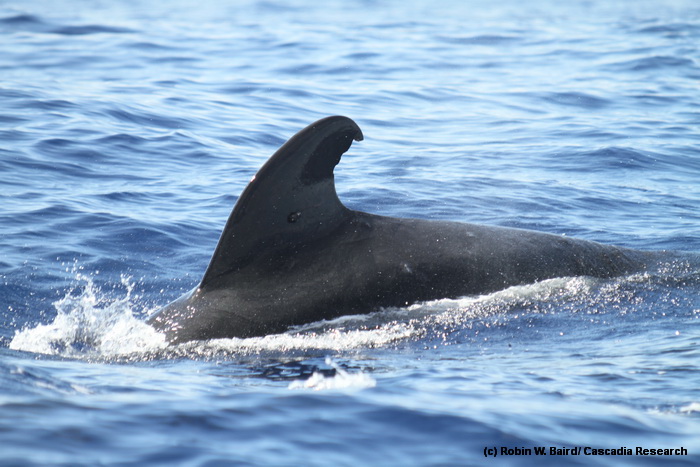 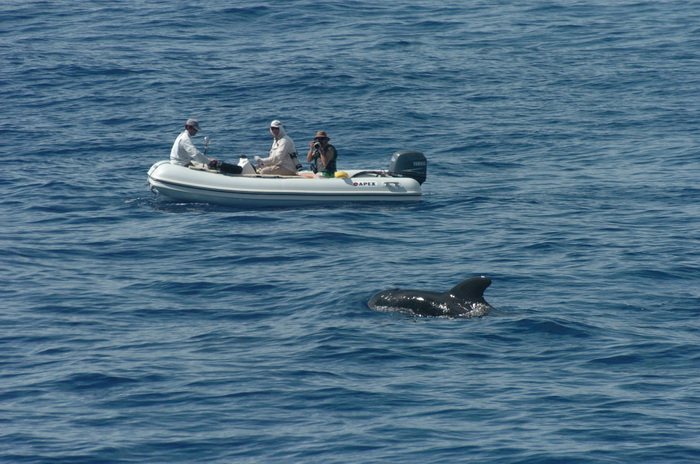 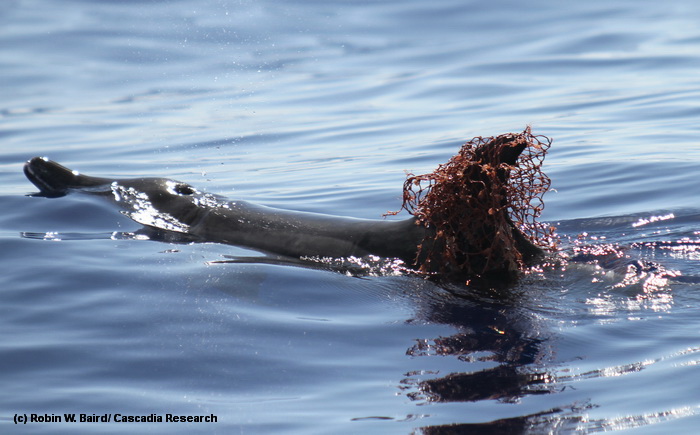 There were also rough-toothed dolphins with the pilot whales – one of the individuals had netting around the dorsal fin and we were worried it was entangled, but while we were watching the dolphin “dropped” the netting off the fin, and another went back and also used its fin to carry the netting – apparently these dolphins were just playing with the netting, rather than being entangled. 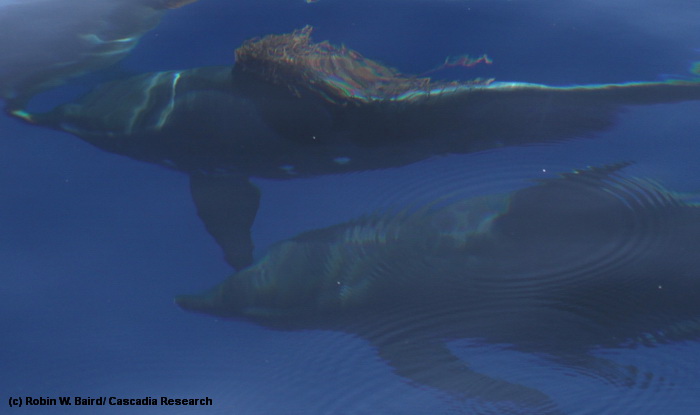 Rough-toothed dolphin with netting around dorsal fin, February 18, 2011, next to another individual. Photo by Robin Baird.

We ended up covering 82 kilometers in the RHIB, and anchored the Searcher in Hanaeli Bay again.

We left Port Allen before dawn on February 17th and transited to the north along the west side of Kaua‘i, in the hopes of finding calmer seas with forecast winds coming from the south. We were able to launch the RHIB, and there were two sightings of rough-toothed dolphins from the Searcher that we were able to work with in the RHIB, collecting two genetic samples and IDs of the individuals present. We covered 64 kilometers in the RHIB and ended the day with the Searcher anchored in Hanalei Bay, on the north side of the island. 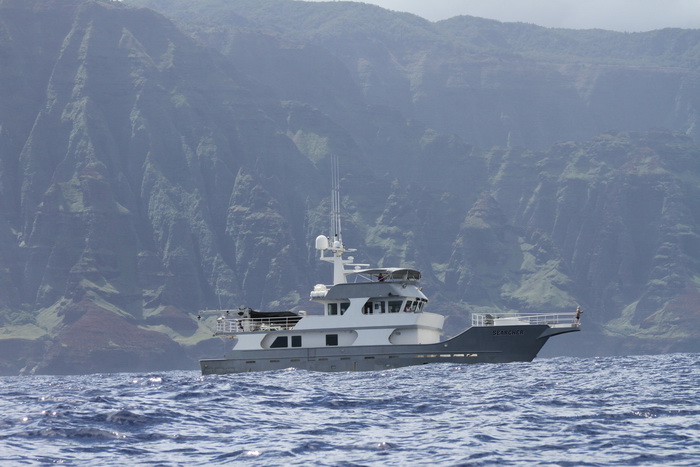 The R/V Searcher off the Na Pali coast. Photo by Jessica Aschettino 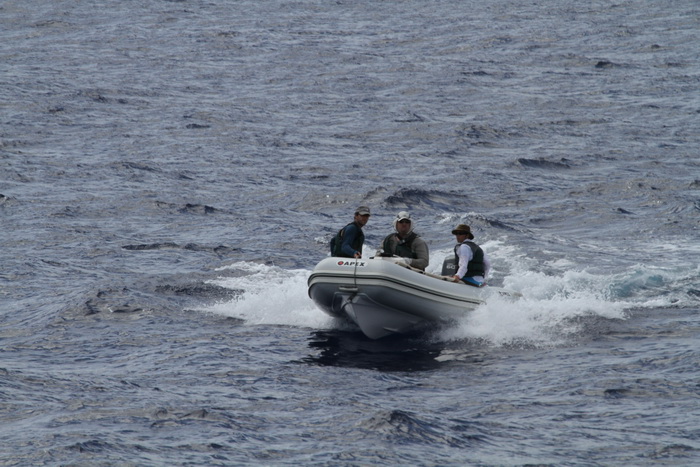 The 15′ RHIB we were using for the project. Photo by Morgan Richie/NAVFAC PAC 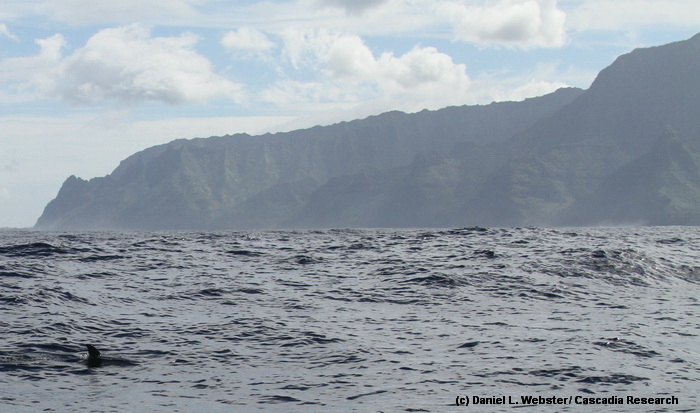 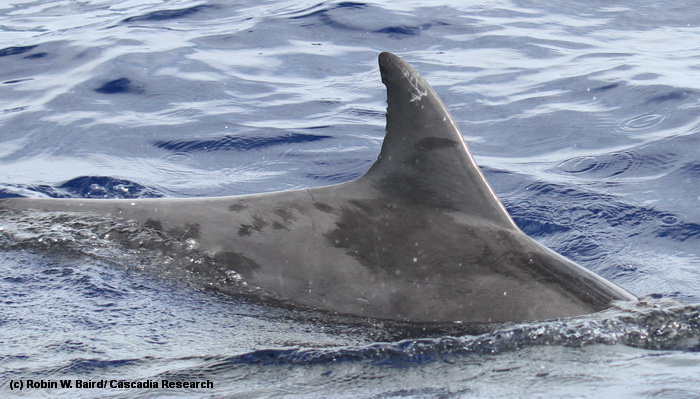 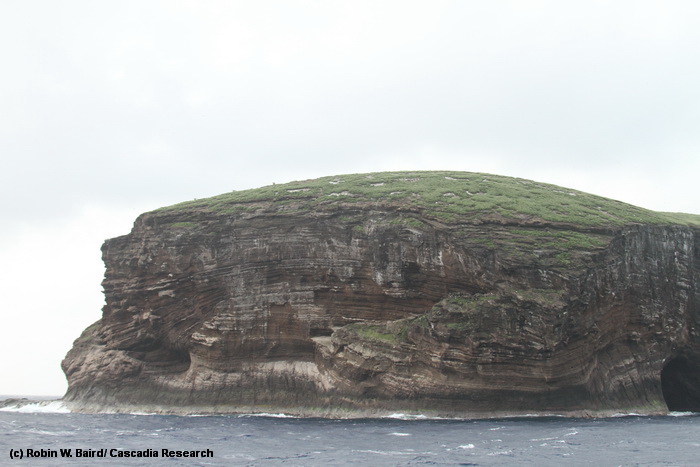 Ka‘ula, to the southwest of Ni‘ihau. Photo by Robin Baird.

We left Port Allen on the night of February 15th and woke the morning of February 16 off Ka‘ula Rock in order for NAVFAC PAC staff to undertake a seabird survey. We had visited Ka‘ula in 2003 and had seen both spinner dolphins and bottlenose dolphins around the island. Sea conditions on February 15th were marginal (Beaufort 5) – we did see spinner dolphins near shore but were not able to launch the RHIB and transited back to Port Allen that night to drop off the seabird biologists and pick up Sean Hanser and Michele Bane for the remainder of the trip.

We would like to thank the captain and crew of the R/V Searcher in making this trip a success, NAVFAC PAC for inviting us along and for their role in sighting surveys, Michele Bane of NOAA Fisheries for her help, Commander, Pacific Fleet for providing funding for the satellite tags and the research vessels, and the Pacific Islands Fisheries Science Center and Naval Postgraduate School (N45) for funding.