Cascadia Research will be undertaking a field project in Hawai‘i from December 8-21, 2009. This work is funded by a number of different sources: the Pacific Islands Fisheries Science Center, the Southwest Fisheries Science Center (with support from the U.S. Navy, N45), and the Alaska SeaLife Center/University of Alaska Fairbanks (with support from the Office of Naval Research). The research team includes Greg Schorr, Daniel Webster and Robin Baird of Cascadia, Dan McSweeney of the Wild Whale Research Foundation, Russ Andrews of the Alaska SeaLife Center/University of Alaska Fairbanks, and a number of volunteers. Our primary goals for this project are to examine movement patterns and habitat use of false killer whales and beaked whales (through the deployment of satellite tags), and to deploy physiological (ECG) tags on short-finned pilot whales.

Like all of our field projects, we also have a number of additional goals:

Most recent updates are at the top of the page. 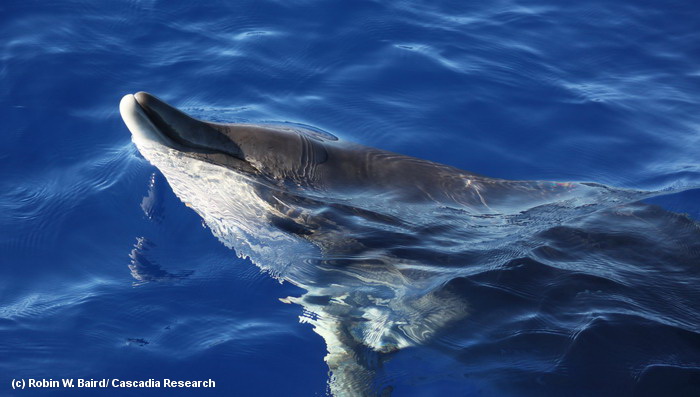 Today was our last day on the water for this trip. We spent much of the day searching for a ECG/dive tag that we deployed on a pilot whale several days ago. These tags fall off after a period of time and float, and in order to obtain the data they need to be recovered. These tags contain a VHF transmitter allowing them to be tracked, although the transmitter can only be detected at distances of 10-15 kilometers from sea level. This tag fell off the whale north of our study area and is drifting offshore. We hope that it gets caught up in one of the eddys that form in the lee of the island and is brought back towards shore (this has happened several times in the past with suction-cup attached data-logging/VHF tags).

Despite the lack of success tracking down the missing tag, we had a good day regardless, finding a group of three Blainville’s beaked whales, and deploying a satellite tag on one individual in the group. 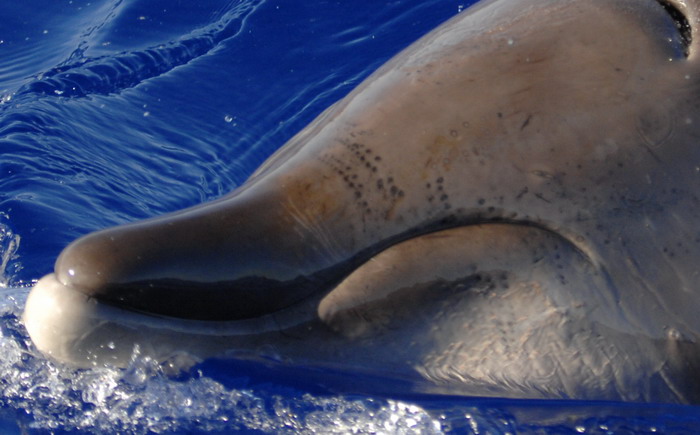 Close up of the head of a juvenile Blainville’s beaked whale. Photo by Russ Andrews. The rows of paired black dots on the head of this individual are caused by the suckers on squid tentacles (squid are the main diet of beaked whales). 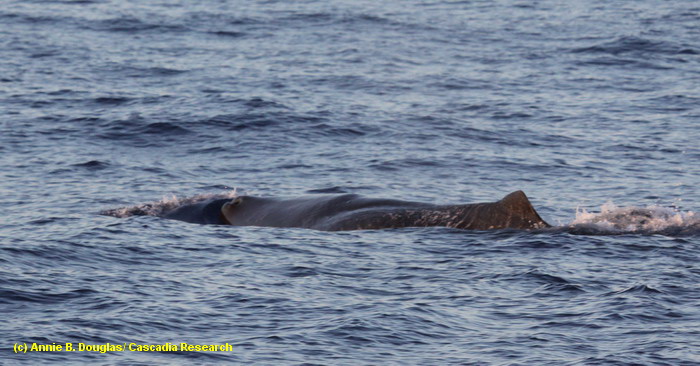 We also encountered our 11th species of odontocete for the trip shortly before sunset, a group of six sperm whales about 40 kilometers offshore of the harbor. 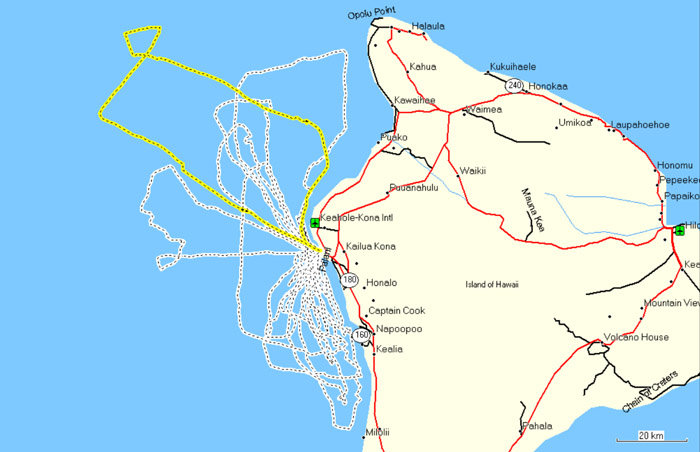 Our tracklines for this trip. Today’s 238 kilometer trackline is highlighted in yellow, our route far to the north and west trying to locate the missing ECG/dive tag.

Check back in April 2010 for updates from our next field project. 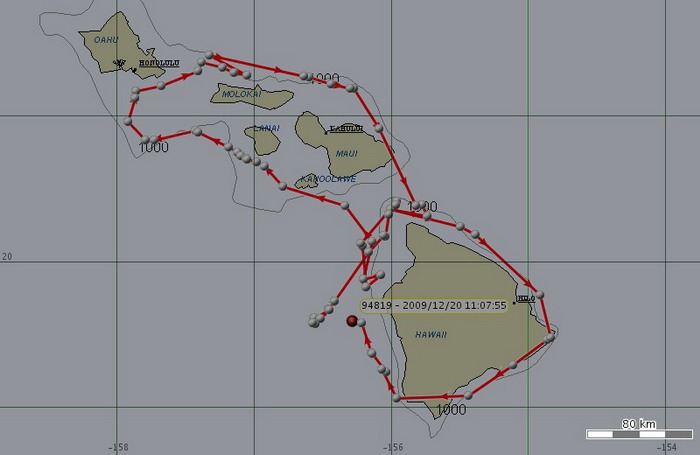 Ten days of movements of one of the Pseudorca we satellite tagged on December 10th. This morning we went out in hopes of finding this group, but lightning storms associated with water spouts forced off off the water early. 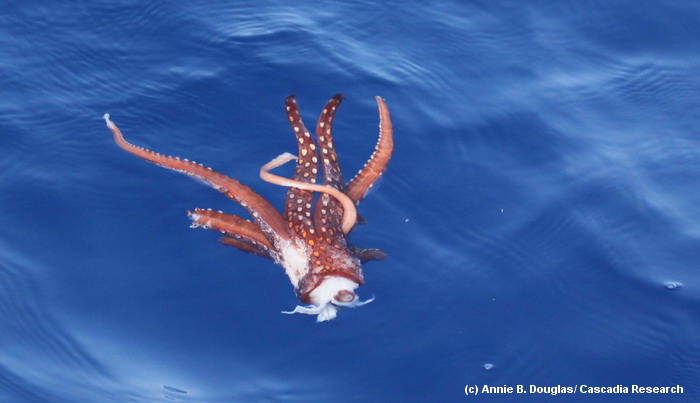 We were out long enough to collect another squid, our third for this strip. Photo by Annie Douglas. 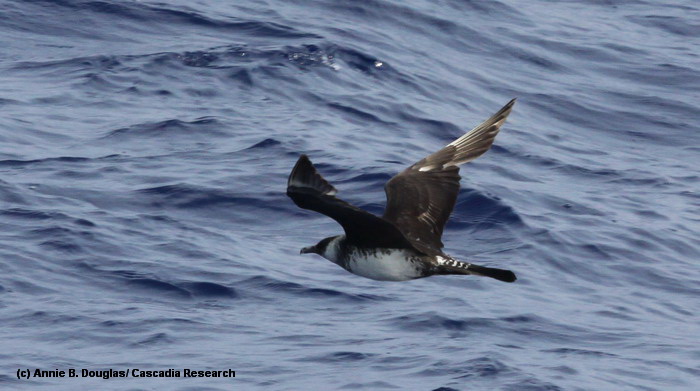 One of the two satellite-tagged false killer whales from yesterday remained in the area overnight and we were able to find it today,as well as about 12-13 other individuals. Most of the individuals we were able to photo-identify today were different from those seen yesterday, reflecting how spread out the groups (and sub-groups) typically are. 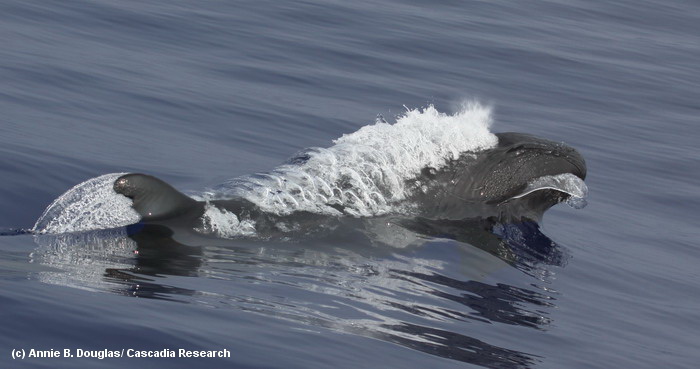 Another good day on the water. After deploying the HARP (see below) and working with pilot whales for several hours we encountered our second group of false killer whales for the trip. We were able to deploy two additional satellite tags, collect five biopsy samples for genetics and pollutant analyses, and photo-identify close to 20 individuals.

A Pseudorca with a disfigured dorsal fin, likely caused by interaction with fishing gear. December 18, 2009. Photo by Robin Baird.

Three Pseudorca. Photo by Annie Douglas. Although not visible in this photo, these three individuals were sharing a mahimahi, passing the fish back and forth. 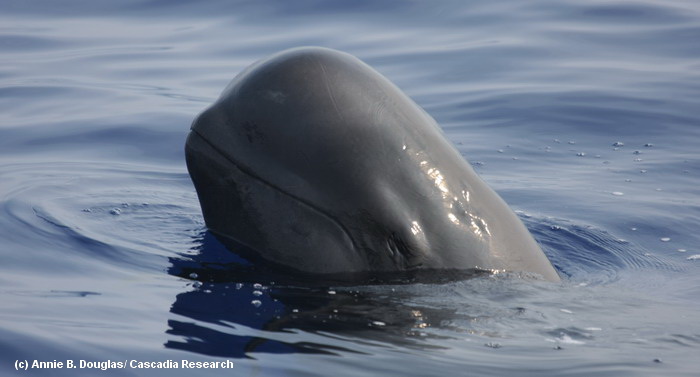 As well as the Pseudorca we encountered several groups of pilot whales and deployed one more satellite-dive tag, and also re-deployed the HARP (see below) to acoustically-monitor cetaceans off of Kona for the next four months. 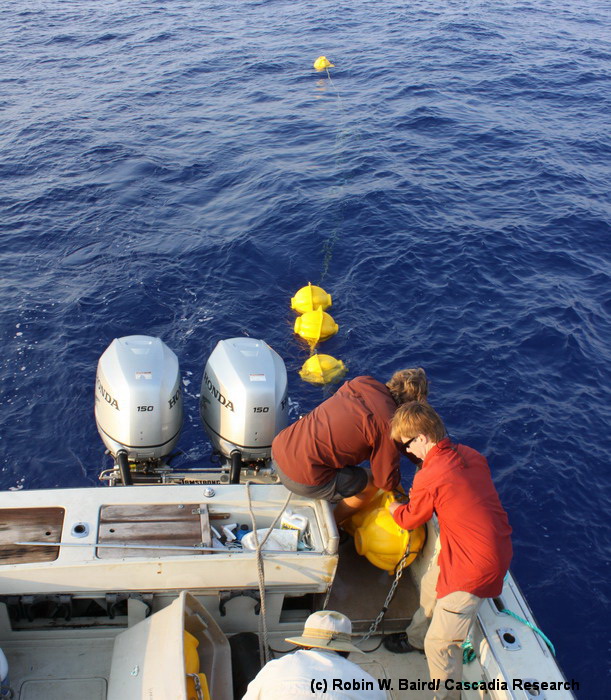 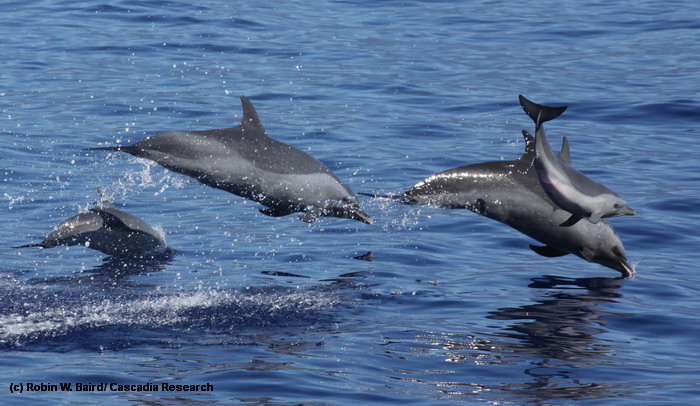 Today we had two groups of spotted dolphins and four groups of short-finned pilot whales. We deployed two additional satellite-depth tags on pilot whales as well as photo-identifying over 50 individual pilot whales. 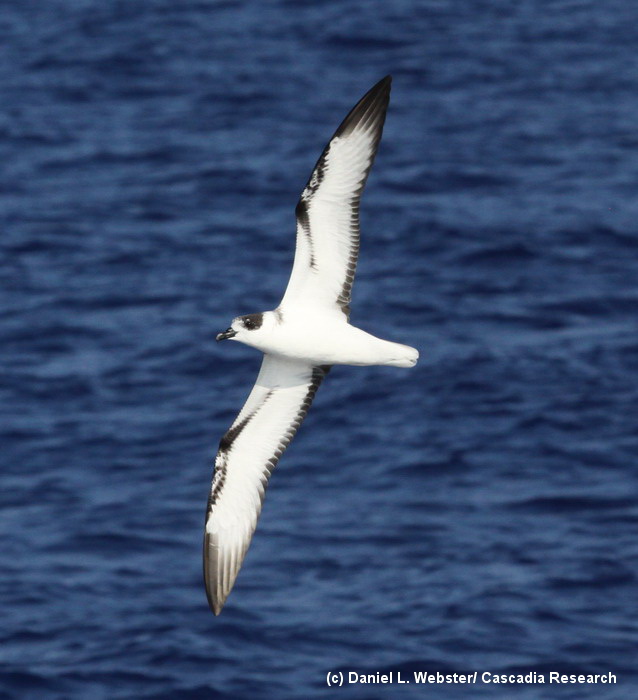 A rare sighting of a White-necked Petrel, December 16. Photo by Daniel Webster.

Today was a quiet day on the water. We covered ~140 km on the water, collected one squid and had some good sightings of petrels, but the only cetaceans seen were spinner dolphins, right off the mouth of Honokohau Harbor, where our boat is kept.

One of our goals this project was to deploy new satellite tags that also collect and transmit detailed dive data – today we deployed two of these tags on short-finned pilot whales, on individuals in two different groups. 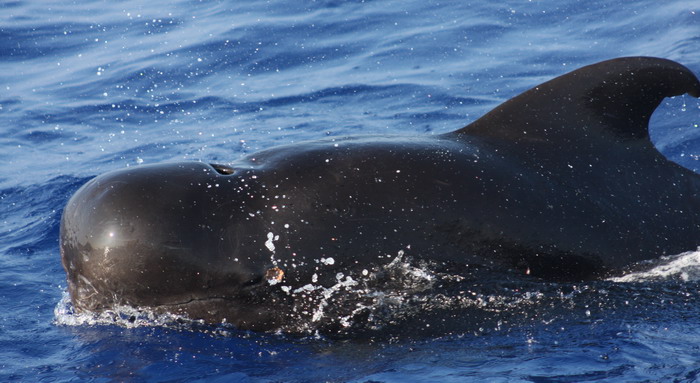 Today we also recovered the HARP that we had deployed in October. Over the next two days Erin Oleson of the Pacific Islands Fisheries Science Center will swap out the hard drives and batteries and we will then re-deploy the HARP to acoustically monitor cetaceans off the Kona coast. 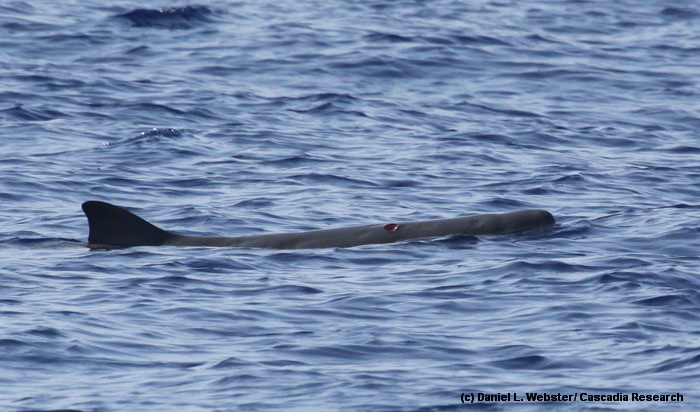 Our 7th day on the water and our 10th species of odontocete, a group of three dwarf sperm whales (Kogia sima). The individual above has a fresh wound from a cookie-cutter shark on the back, as well as scars visible from a number of healed cookie-cutter shark bites (the shallow depressions on the back in front of and behind the fresh bite). Most adult dwarf sperm whales in our photo-identification catalog are quite well marked (see below), suggesting that this individual is probably just a year or two old. 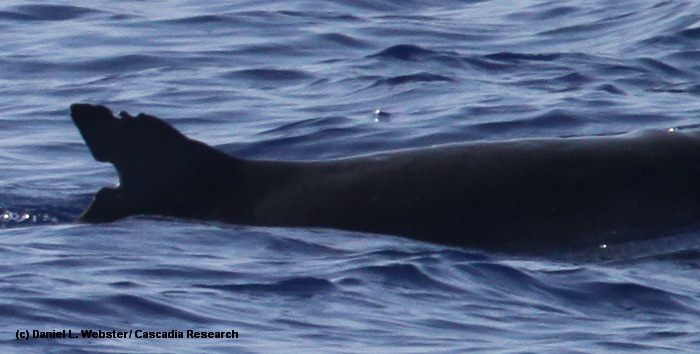 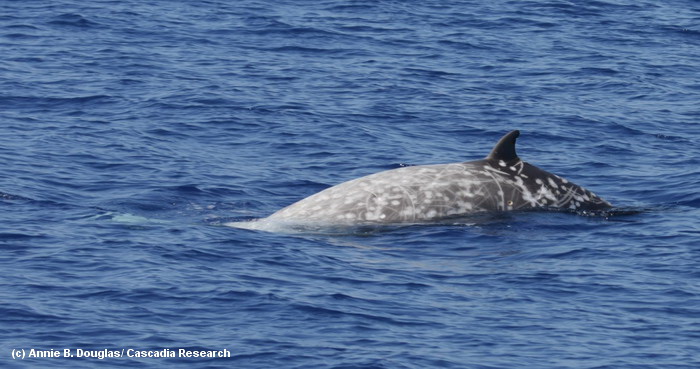 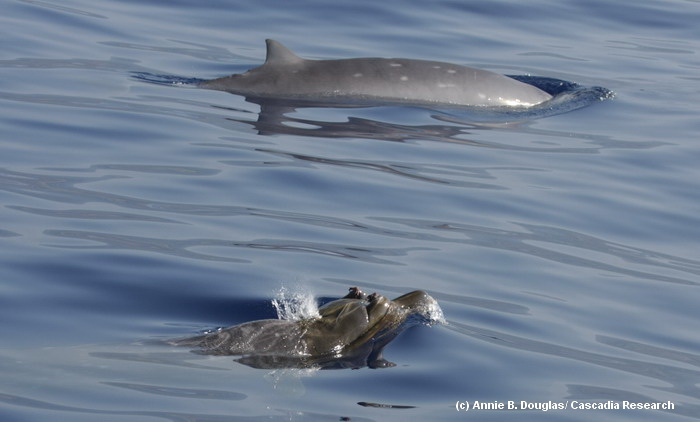 On our fifth day on the water we encountered our ninth species of odontocete for the trip, a group of three Blainville’s beaked whales, including an adult male (the individual in the foreground, above), a sub-adult (individual in the background, above), and an adult female. We were able to get good ID photos of all three individuals as well as two biopsy samples for genetic studies. These individuals are all part of a small island-associated population that is restricted largely to the west side of the island of Hawai‘i. The adult female is HIMd007 in our catalog, an individual first documented by Dan McSweeney off the island in 1997 and last documented in December 2008. For more infomation on Blainville’s beaked whales in Hawai‘i see our beaked whale page. 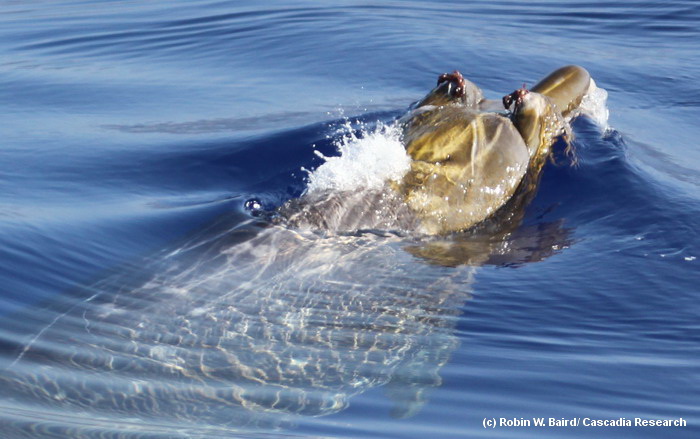 A close-up of the head of an adult male Blainville’s beaked whale, December 12, 2009. Photo by Robin Baird. This individual has just broken the surface and has started to exhale. Only the tip of one of the two erupted teeth in the lower jaw is visible (the right-side tooth, with purple stalked barnacles attached to the inner side of the tooth). The tip of the left tooth is completely obscured by stalked barnacles. The males use these teeth for fighting with other males, resulting in the linear scars that cover the head and back of this individual. 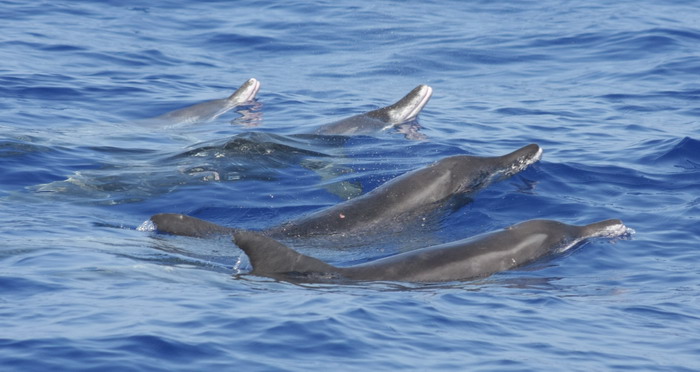 A group of rough-toothed dolphins off Kona, December 11, 2009. Photo by Jolanda Luksenburg. 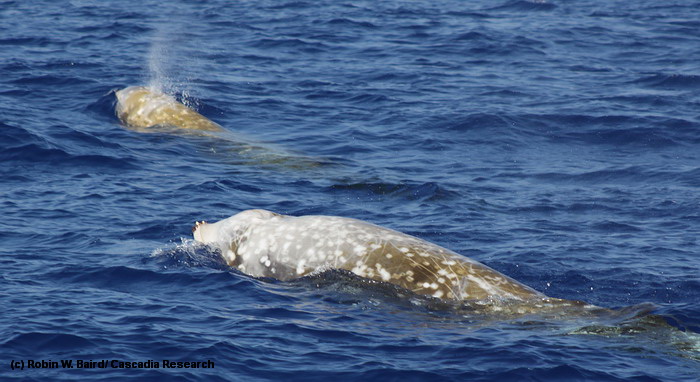 Two Cuvier’s beaked whales, December 11, 2009. Photo by Robin Baird. The close animal is an adult male, with the two erupted teeth visible at the tip of the lower jaw. We were able to photo-identify all three individuals were in this group as well as collect one biopsy sample for genetic, stable isotope and pollutant analyses. 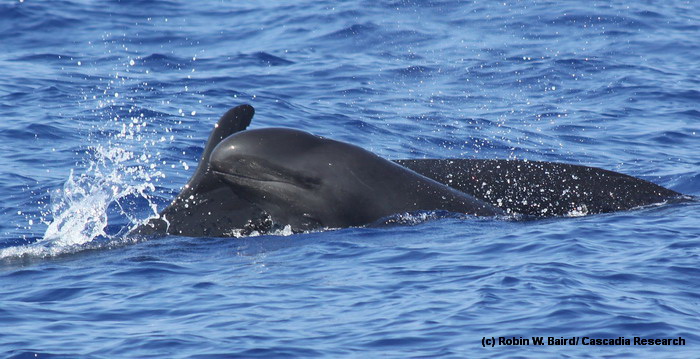 A Pseudorca mother and calf, December 10, 2009. Photo by Robin Baird. Note the very small remora on the lower jaw of the calf, directly below the eye.

A good day today. We finally encountered a group of false killer whales (aka Pseudorca) from the island-associated (insular) population. Pseudorca are our highest-priority species, but we only see them an average of every ~16 days on the water, so needless to say we were very excited about finding a group. Although we never did see the satellite-tagged individual that has been in the area (see map below), locations from that individual (accessed through the ARGOS website) helped us find this group far offshore of the Kona coast. We were able to collect five biopsy samples for genetics, pollutant and stable isotope analyses, an acoustic recording, photo-identifications of all 13 individuals encountered, and we also deployed two additional satellite tags to track movements. 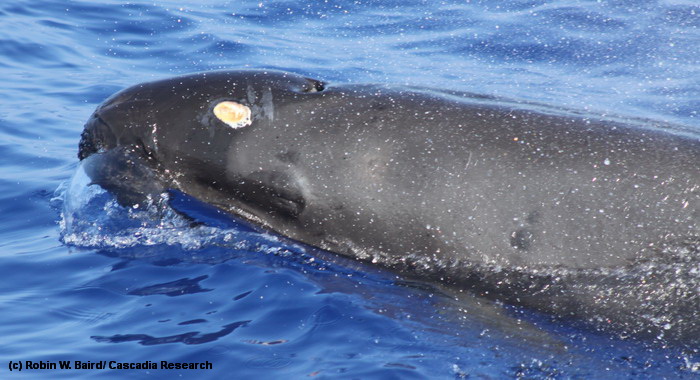 Pseudorca with a wound on the head from a cookie-cutter shark. These deep-water sharks are parasitic, taking bites out of various species of whales and dolphins (as well as large fish) without killing them.

Melon-headed whales, December 9, 2009. Photo by Robin Baird. The very distinctive individual on the left is HIPe0657 in our photo-identification catalog, an adult female previously seen on five occasions (with thanks to Jessica Aschettino for identifying this individual).

Our second day on the water we headed north, in search of one our satellite tagged Pseudorca from October. Satellite locations from the night before showed that the whale had moved into our study area. Despite a long search (160 kilometers) we did not find the Pseudorca, but we did encounter a group of about 160 melon-headed whales. As well as photo-identifying many of the individuals we deployed one satellite tag, to track movements of this group. 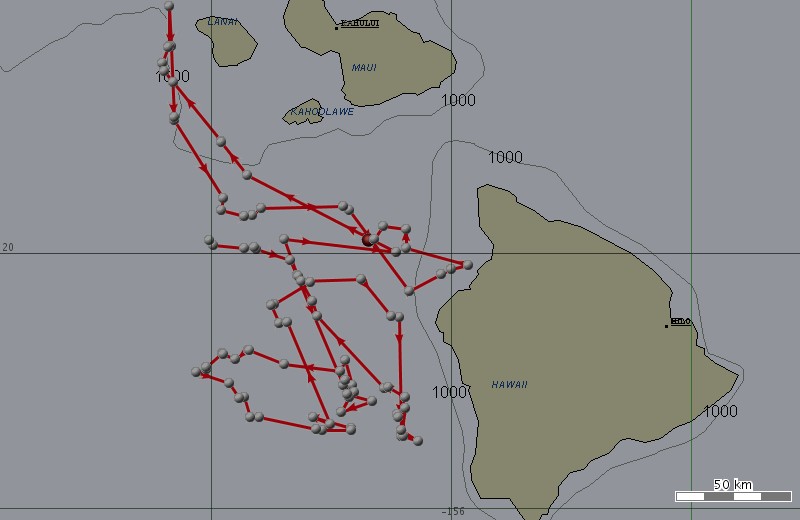 Map showing satellite locations for a tagged Pseudorca from the insular population, for 10 days ending December 9, 2009. The offshore extent of movements in the last 10 days reached 110 kilometers, along the eastern edge of Jaggar Seamount. We are hoping this whale will stay in the area so we are able to re-encounter the group this trip. 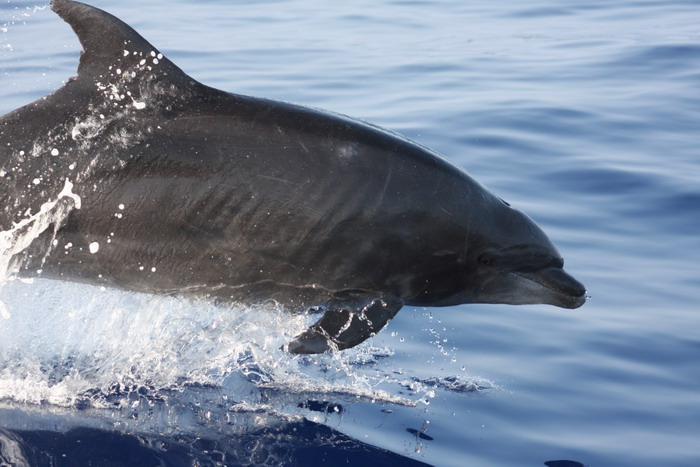 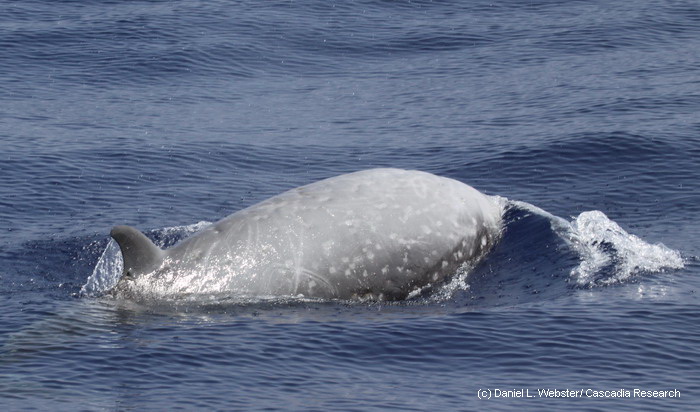 Our first day on the water, and we encountered one of our high priority species, a Cuvier’s beaked whale (photo by Daniel Webster). This individual, an adult (based on the white coloration), and a male (based on the extensive linear scars, caused by fighting with other adult males). We’ve seen this individual (HIZc044 in our catalog) several times before, the last in December 2008. 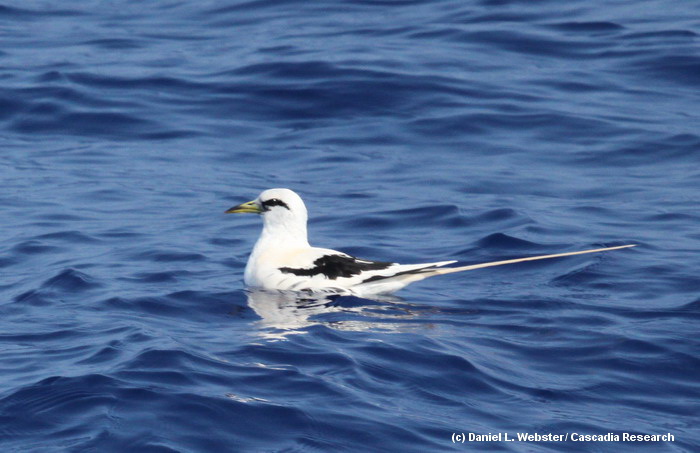 A White-tailed Tropicbird off Kona, December 8, 2009. Photo by Daniel Webster.