Cascadia Research will be undertaking a 17-day collaborative field project with researchers from Woods Hole Oceanographic Institution off the island of Hawai‘i starting August 9th, 2012. The primary purpose of the project is to obtain information on diving and acoustic behavior of false killer whales and melon-headed whales through the deployment of suction-cup attached digitial acoustic tags (Dtags), continuing work started last October. We’ll also have a second boat on the water during this period to allow us to survey a broader area off the Kona coast each day and we’ll be trying to deploy satellite tags on several species to examine movements and habitat use. Like all of our projects we’ll also be obtaining photos from most species of odontocetes we encounter, to contribute to ongoing studies of residency patterns and social organization and to estimate population sizes, and collecting biopsy samples for toxicology and genetic studies.

The research team includes Aran Mooney from Woods Hole Oceanographic Institution, Daniel Webster, Jessica Aschettino, and Robin Baird of Cascadia, Jeff Hogan of Killer Whale Tales, Renee Albertson of Oregon State University, Dan McSweeeney of the Wild Whale Research Foundation, and a number of visiting researchers and volunteers. This work is primarily being funded by a grant from the Office of Naval Research, as well as a grant from the Pacific Islands Fisheries Science Center. 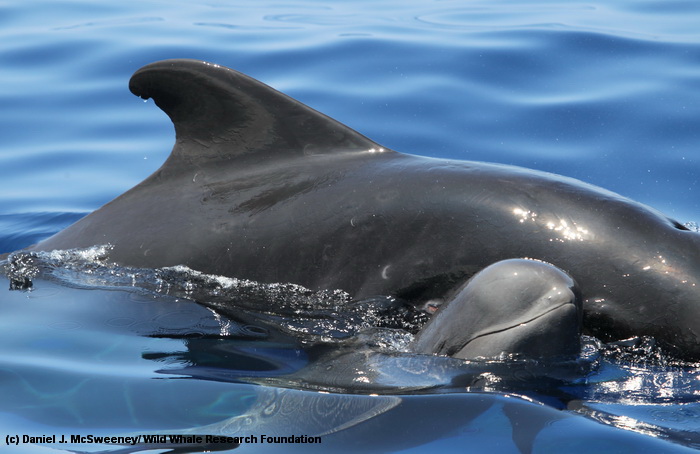 Although our dual-boat effort ended on August 25th, we had an additional three days of effort with a single boat off Kona, ending the field project on August 31st. Between the two boats we had 36 “boat days” on the water and covered over 4,000 kilometers of trackline. During this effort we had 104 encounters with 9 species of odontocetes, including one seen very rarely (Risso’s dolphins), and three encounters with another rarely seen species, pygmy killer whales. What was most surprising about the trip was the complete lack of sightings of dwarf sperm whales – in our last two projects off of Kona we had 21 sightings of dwarf or pygmy sperm whales in 53 days of effort, and typically they have been our fifth-most frequently encountered species, so the complete lack of sightings was surprising, to say the least. We also had only one confirmed beaked whale sighting, whereas typically we encounter beaked whales an average of about once every five days on the water off Kona. 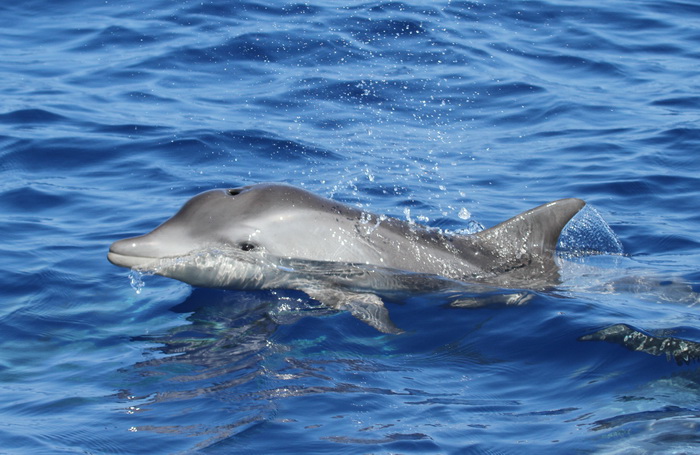 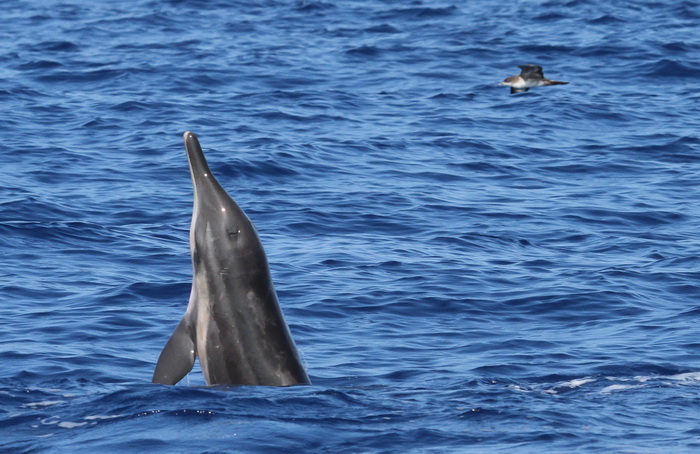 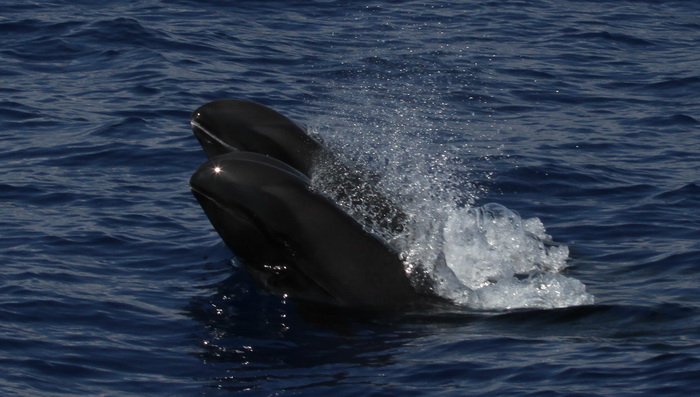 Melon-headed whales, August 24, 2012. Photo (c) Renee Albertson. Today was our most productive day on the water this trip – we encountered a group of about 350 melon-headed whales from the Hawaii Island resident population, were able to deploy (and recover) several Dtags, and also deployed two satellite-tags, including one location/dive tag, that should give us information on the depths and durations of dives as well as locations of the tagged individual. 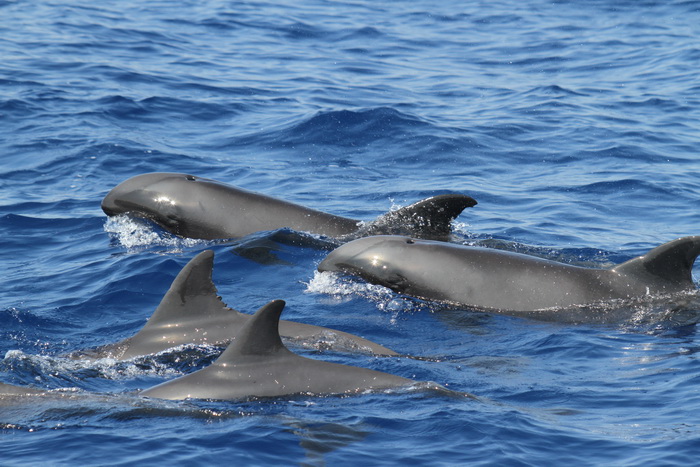 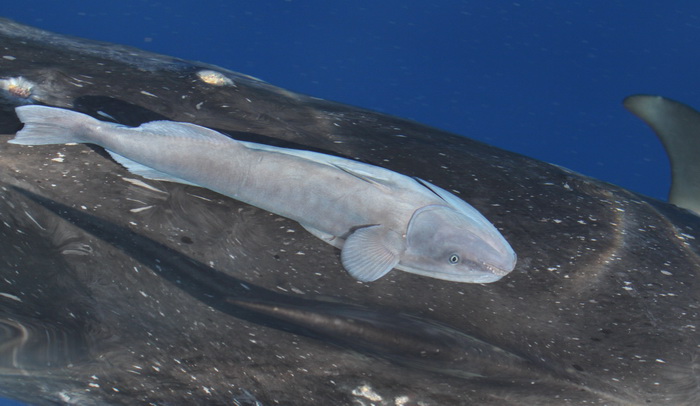 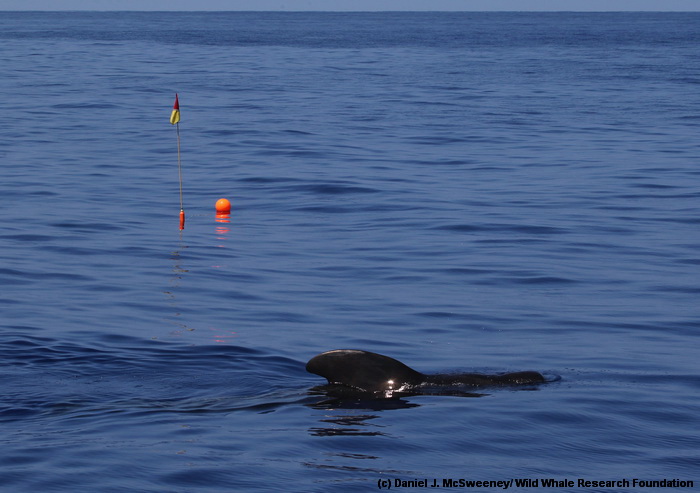 A short-finned pilot whale and the BURP (Biological Underwater Recording Package) developed by Jay Barlow at the Southwest Fisheries Science Center. Photo (c) Dan McSweeney, August 22, 2012. We are using the BURP to obtain acoustic recordings, focusing on pilot whales, for research being undertaken on acoustic differences among pilot whale groups by Amy Van Cise at Scripps Institution of Oceanography. 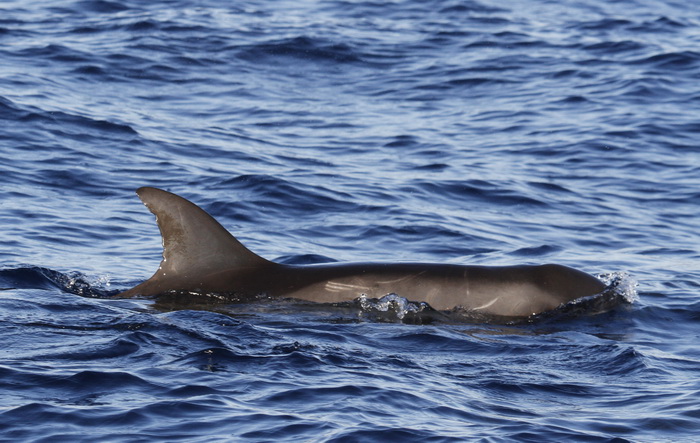 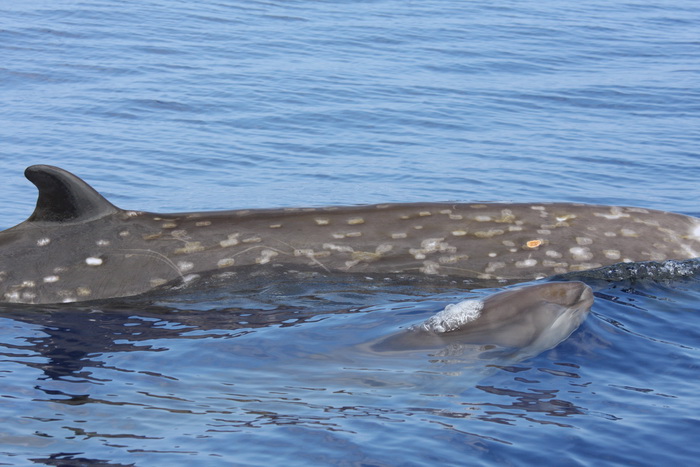 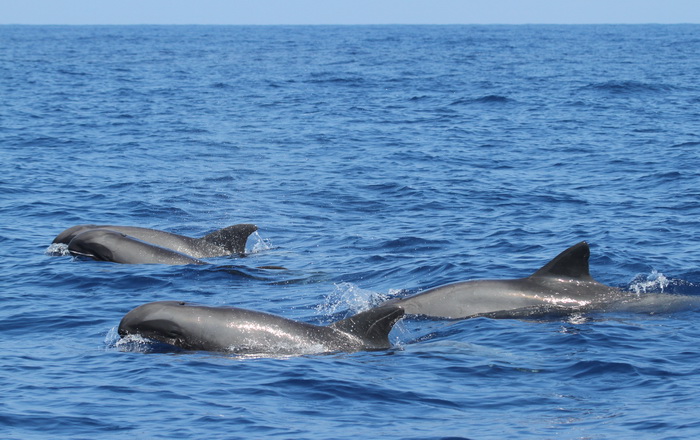 Melon-headed whales, August 19, 2012. Photo (c) Jessica Aschettino. Today we encountered our 8th species of odontocete for the trip, a group of about 25 melon-headed whales. This was a relatively small group for this species, which typically occurs in groups of several hundreds (the largest group we’ve encountered of melon-headed whales was ~800 individuals). We were able to obtain photos of all the individuals present and obtained two biopsy samples for genetic studies. From previous work we know there are at least two poulations of melon-headed whales in the area, one that is resident to the island of Hawaii, and one that moves among the islands and into offshore waters. We’ve compared some of the photos from today to our catalog but have not found matches to either population, so suspect these individuals may be from an open-ocean population. For more information on melon-headed whales in Hawaii see our web page for that species. 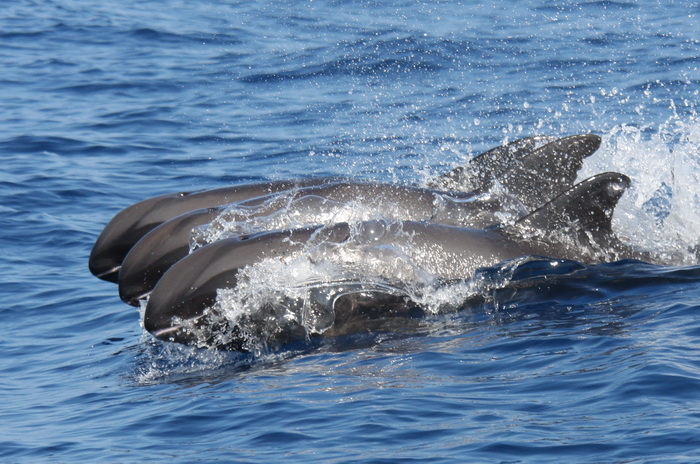 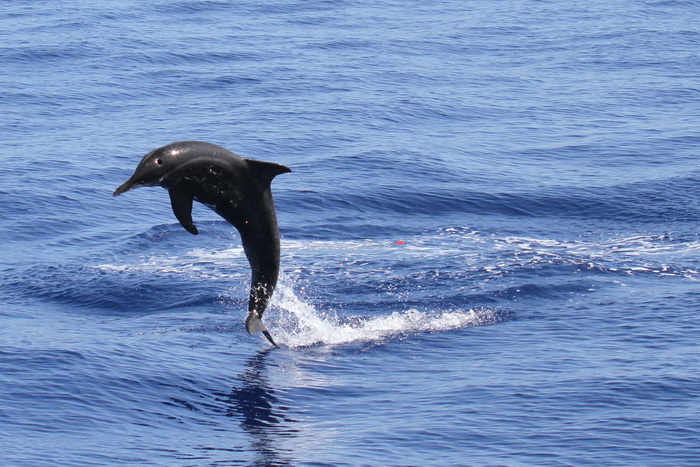 We’ve had a few fairly productive days on the water, with encounters with rough-toothed dolphins, short-finned pilot whales, and spotted dolphins, but surprising still no encounters with beaked whales or dwarf sperm whales, despite a combined 19 days on the water between the two boats. As well as obtaining identification photos of many individuals and a number of acoustic recordings, since the start of the trip we’ve collected 18 biopsy samples for genetic studies, one of a rough-toothed dolphin and 17 of short-finned pilot whales. The short-finned pilot whale biopsy samples are being collected for a study of population structure within the Pacific by Amy Van Cise, a Ph.D. student at Scripps Institution of Oceanography. 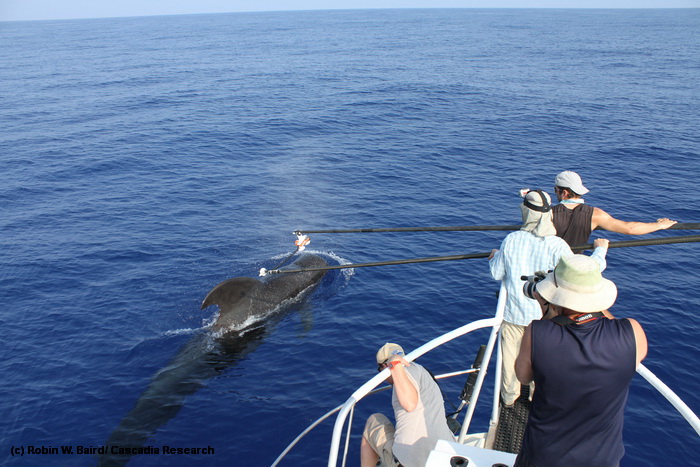 We’ve also attempted to deploy an ECG tag, developed by Russ Andrews of the University of Alaska Fairbanks/Alaska SeaLife Center, on a short-finned pilot whale, as well as one DTag, on August 16, 2012. Photo (c) Robin Baird. 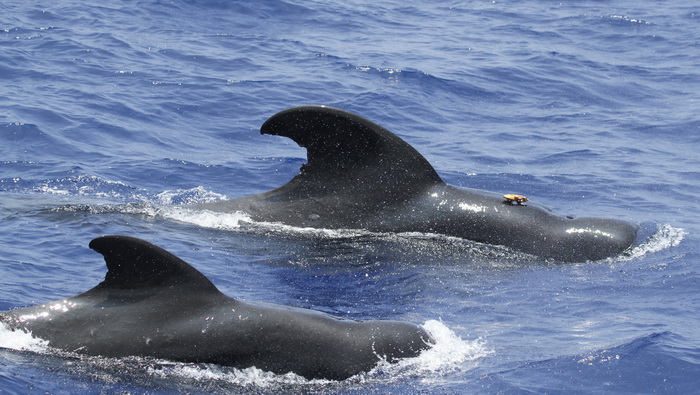 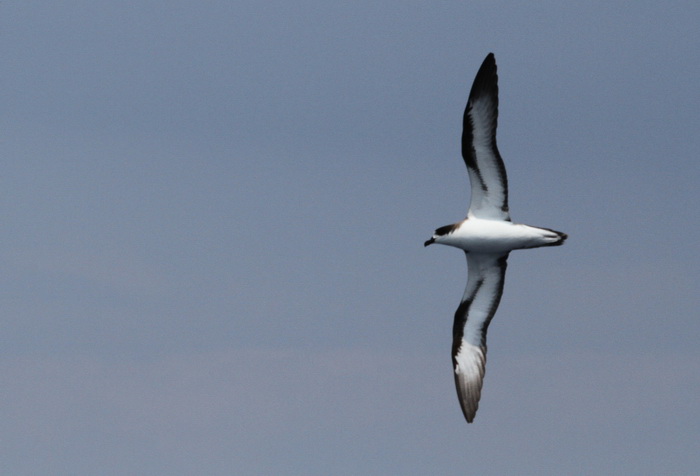 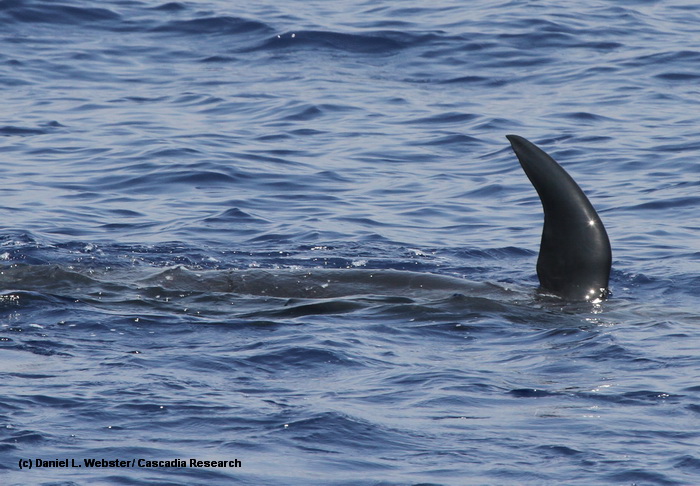 A short-finned pilot whale on its side with it’s pectoral flipper in the air, August 15, 2012. Photo (c) Daniel Webster 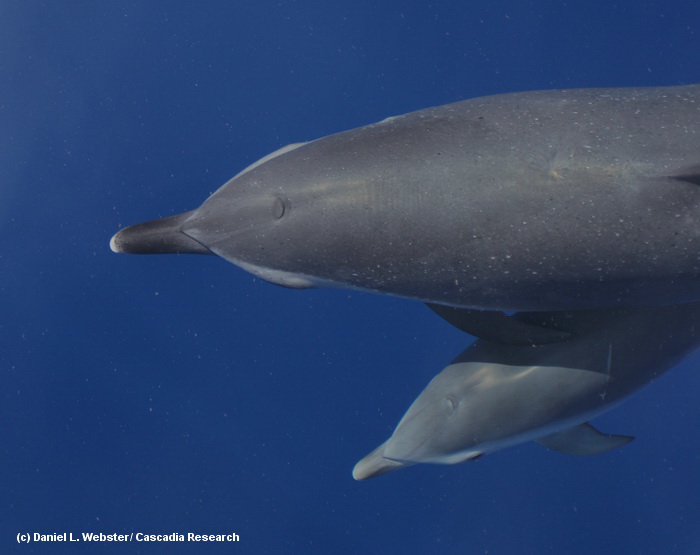 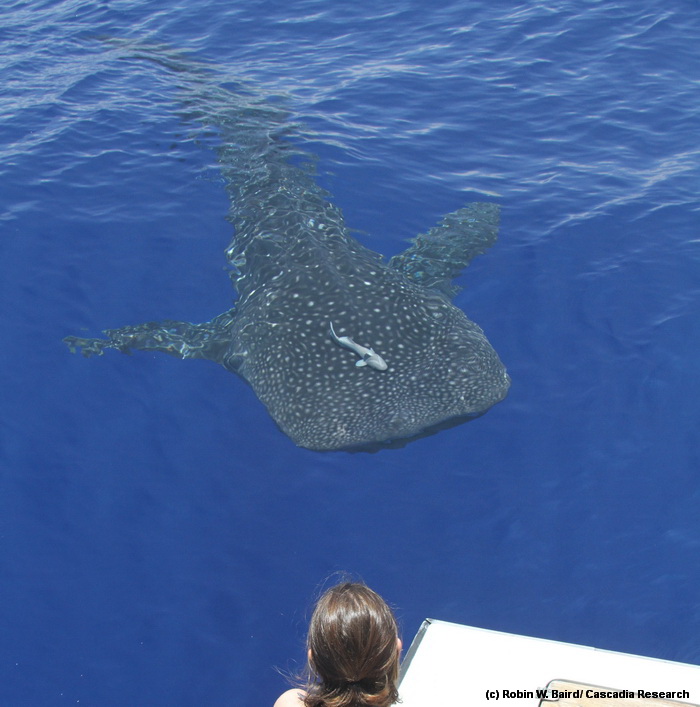 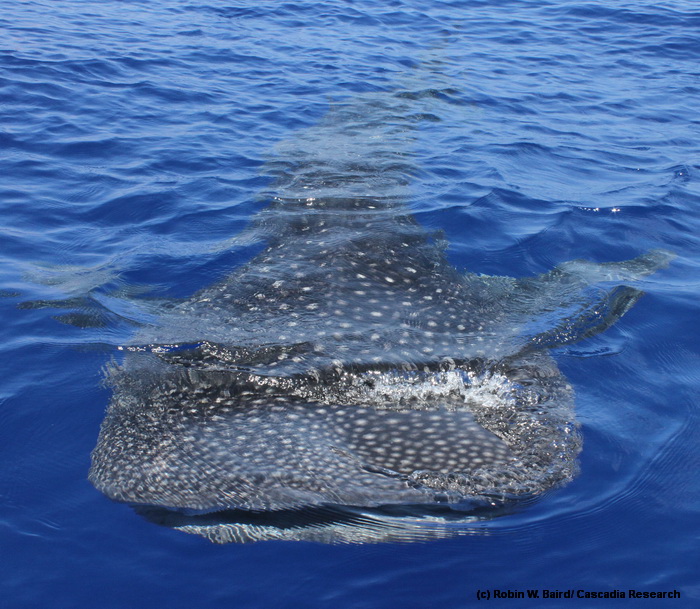 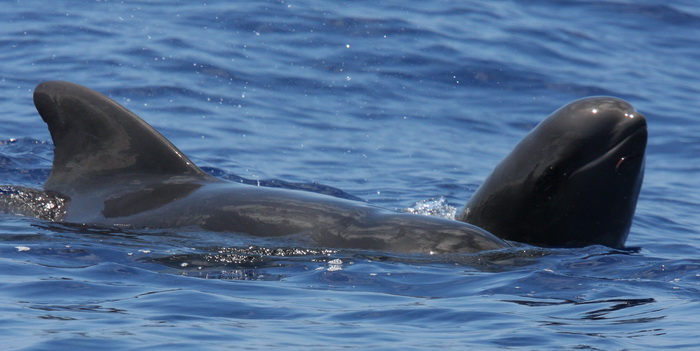 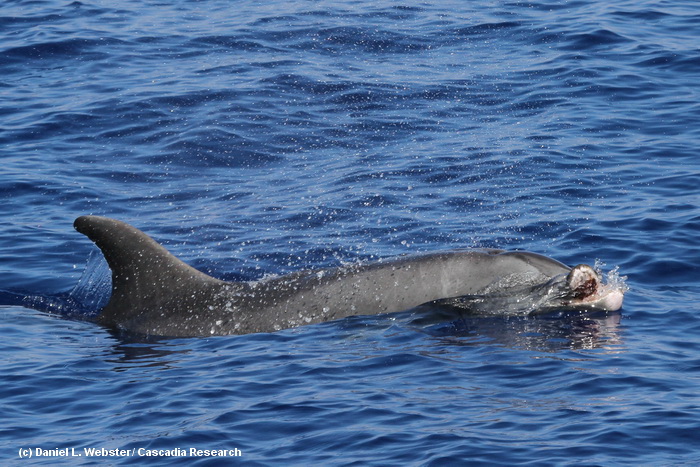 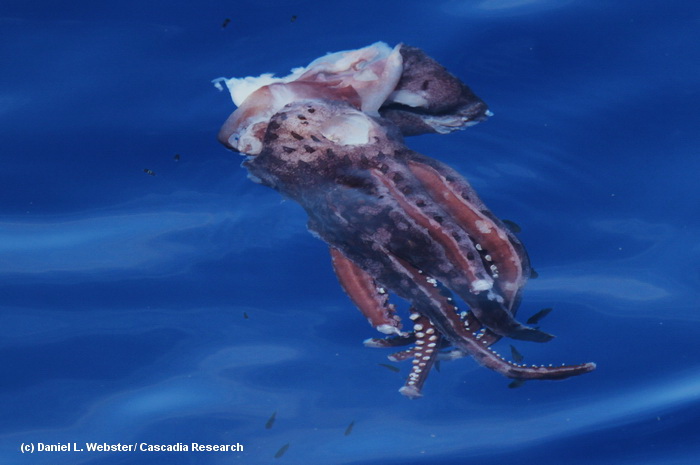 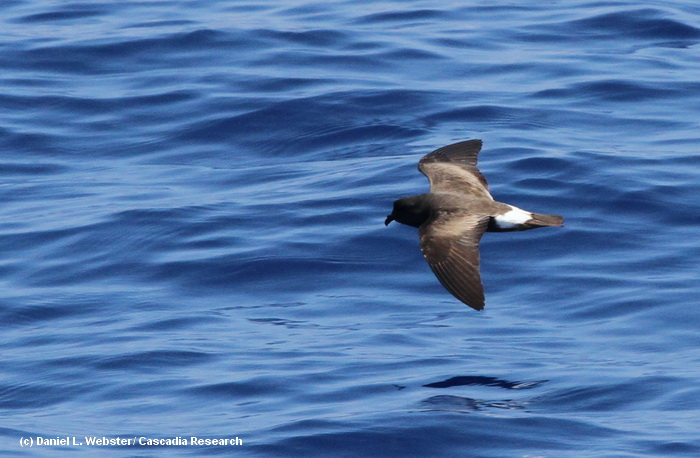 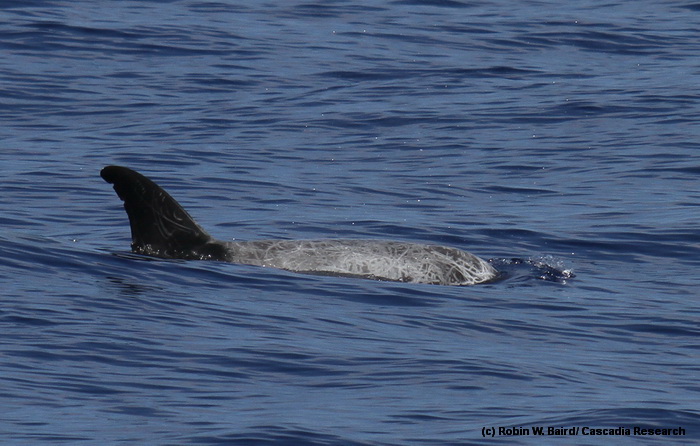 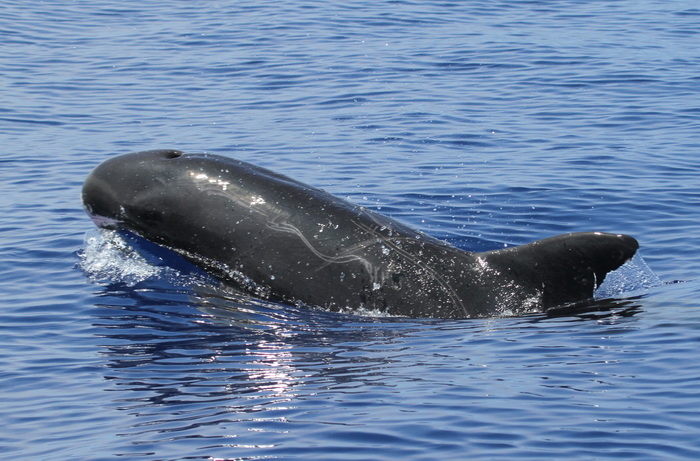 Pygmy killer whale, August 11, 2012 (c) Renee Albertson. The two pygmy killer whales encountered today are part of the resident population – one of the individuals was first seen off the island in 1988, and the two individuals, both adult males, have been seen together regularly since 2005. 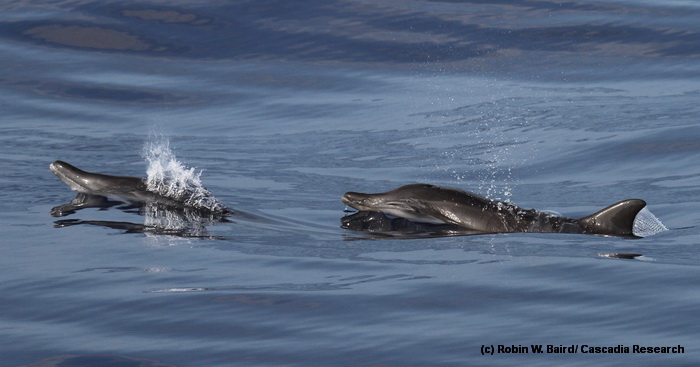 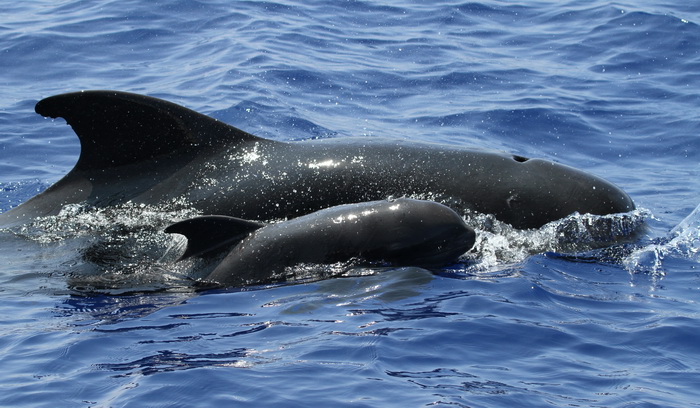 Short-finned pilot whale mother and newborn calf, August 9, 2012. Photo (c) Jeff Hogan. Our first day on the water today, and we encountered a group of about 30 pilot whales, including this mother and new born calf. We were able to photo-identify all the individuals present and get some underwater (GoPro) video footage. Tomorrow will be our first day out with both boats.

Photos below of our two research vessels 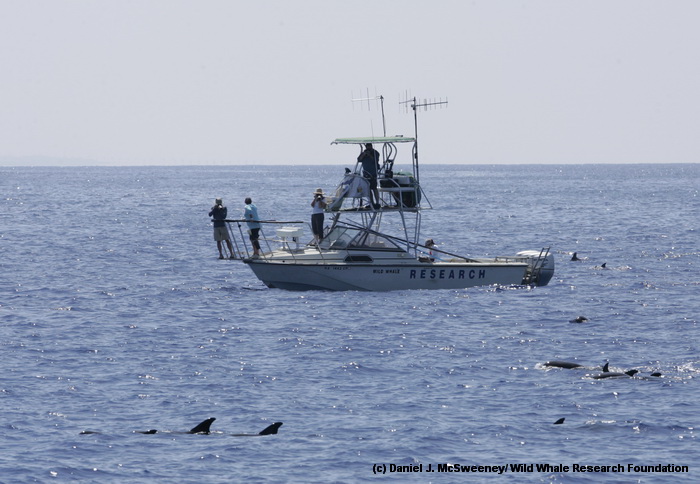 The R/V Wild Whale, a 27′ Boston Whaler, our primary research vessel, with a group of melon-headed whales. Photo from October 19, 2011, (c) Dan McSweeney. 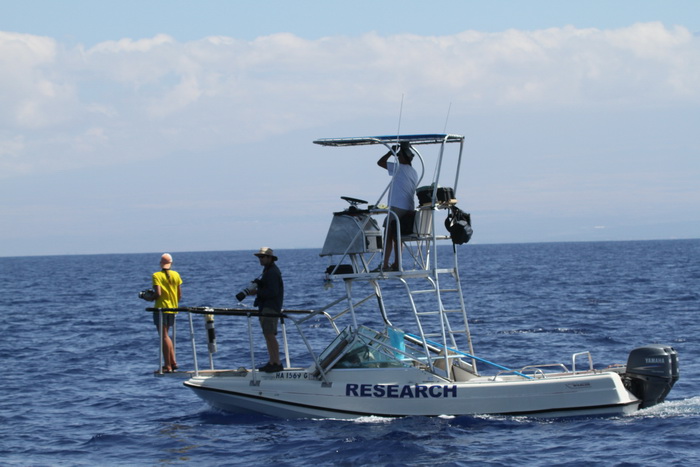