Cascadia Research will be undertaking a field project in Hawai‘i from April 8-21, 2010. This work is funded by a number of different sources: the Pacific Islands Fisheries Science Center, the Southwest Fisheries Science Center (with support from the U.S. Navy, N45), and the Alaska SeaLife Center/University of Alaska Fairbanks (with support from the Office of Naval Research). The research team includes Greg Schorr, Daniel Webster and Robin Baird of Cascadia, Dan McSweeney of the Wild Whale Research Foundation, Russ Andrews of the Alaska SeaLife Center/University of Alaska Fairbanks, and a number of volunteers. Our primary goals for this project are to examine movement patterns and habitat use of false killer whales and beaked whales (through the deployment of satellite tags), and to deploy physiological (ECG) tags on short-finned pilot whales.

Like all of our field projects, we also have a number of additional goals:

Most recent updates are at the top of the page. 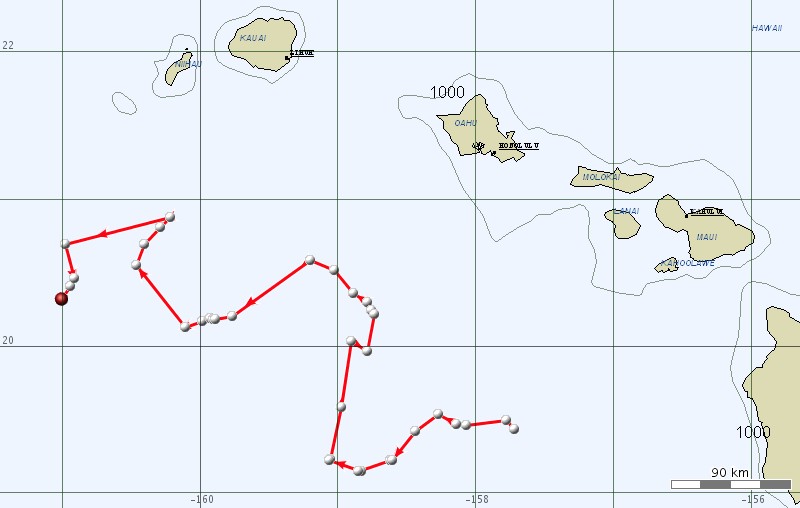 Although our field project ended last week we are still getting location data from the satellite tagged sperm whale and Cuvier’s beaked whale. The map above shows 10 days of movements of the sperm whale, from April 15-25, 2010. The satellite-derived locations have not been filtered to eliminate unrealistic locations (based on travel speed) and locations may change after additional post-processing by ARGOS. 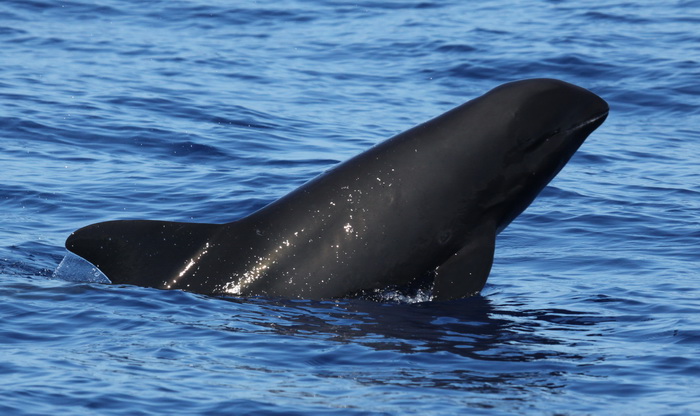 This field effort was the start of Cascadia’s 8th year of Hawai‘i odontocete research, as part of an ongoing (11-years and counting) study. As with most of our field projects in Hawai‘i, our accomplishments include a slow accumulation of photographs, samples for genetics and toxicology, and habitat use data of the many species of odontocetes we encounter, combined with a couple of particularly good days when we have more major accomplishments, that rapidly change the way we think about or what we know about one or two species. This trip we covered almost 2,000 kilometers of survey trackline, had 45 encounters with 11 species, took over 16,000 photos, and collected 14 samples for genetics and toxicology. We also had two of those “major accomplishment” days. On April 11th we satellite tagged a sperm whale, and movement data from that individual is still coming in (see below for maps and details). On April 19 we deployed a satellite/dive tag on a Cuvier’s beaked whale, the first such tag deployed on a beaked whale, and we are continuing to obtain both movement and dive data from that individual. Despite it being the 11th year of our research in Hawai‘i, we are still learning new things and these two days will change what we know about these two species in Hawaiian waters.

Our next field effort in Hawai‘i will probably not be until September or October of this year. Sign up to our Facebook page if you want to receive updates from future projects.

A pygmy killer whale, April 21, 2010. Photo by Robin Baird. Our 11th species of odontocete for the trip, a group of about nine pygmy killer whales. We were able to get good identification photos of all the individuals and one sample for genetics and toxicology. For more information on pygmy killer whales see our page for this species. 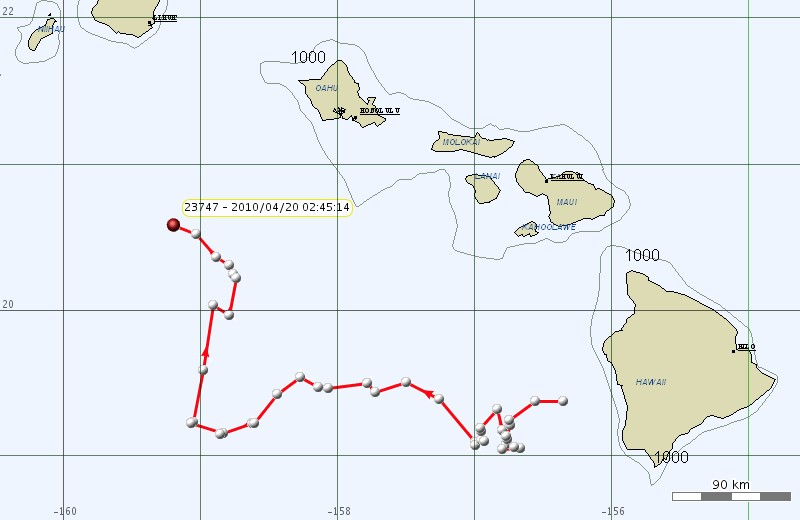 Movements of the satellite-tagged sperm whale through the morning of April 20, 2010. 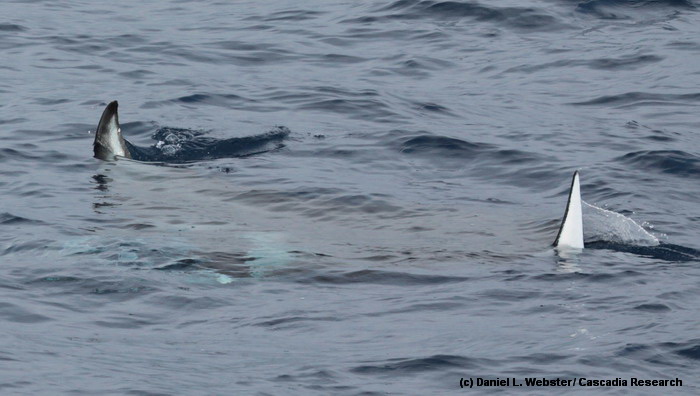 Manta off Kona, April 20, 2010. Photo by Daniel Webster. Another 160 kilometers on the water today. We re-deployed the HARP, and also spotted a distant breaching beaked whale, but otherwise the highlights of today were non-marine mammal wildlife. 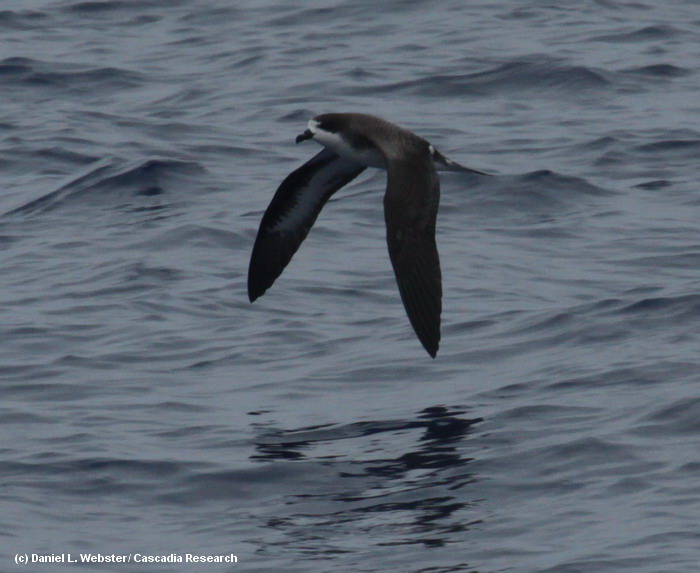 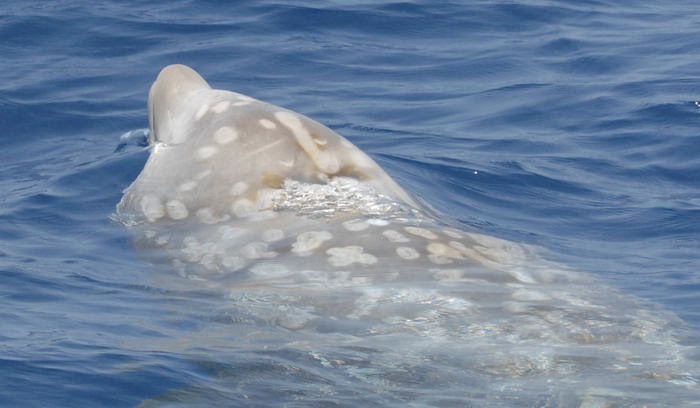 Adult female Cuvier’s beaked whale off Kona, April 19, 2010. Photo by Russ Andrews. We were able to identify this individual as an adult female by the lack of erupted teeth in the lower jaw, the extensive scarring from cookie-cutter sharks, and the lack of extensive linear scars (see our beaked whale page for more information). 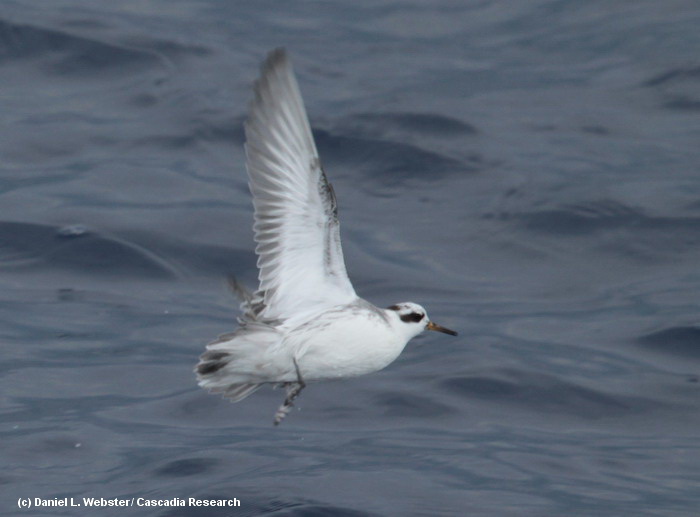 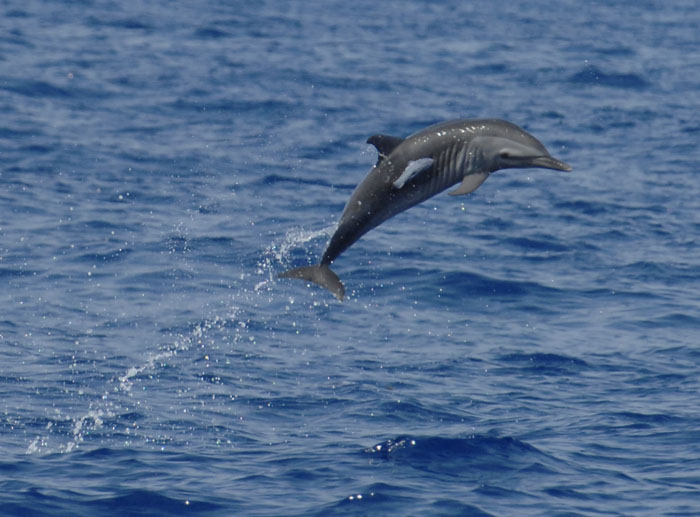 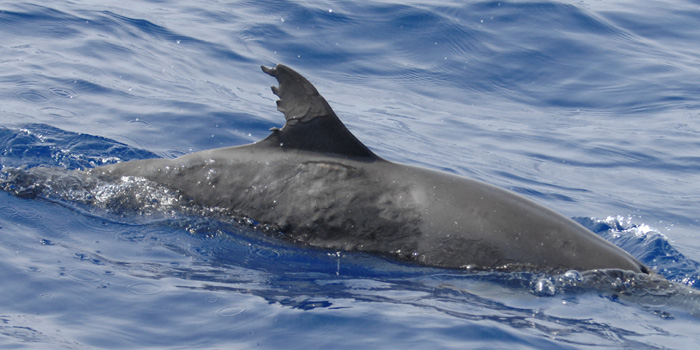 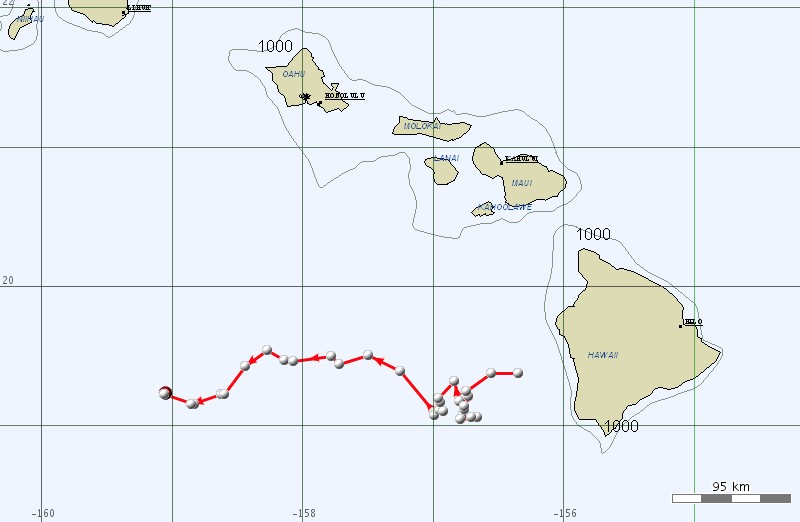 Movements of the satellite tagged sperm whale from April 11 through mid-day April 17, 2010. The satellite-derived locations have not been filtered to eliminate unrealistic locations (based on travel speed) and locations may change after additional post-processing by ARGOS. 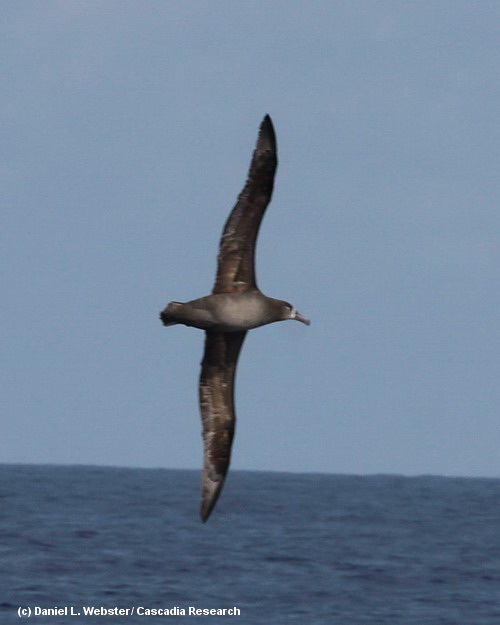 Black-footed albatross, April 16, 2009. Photo by Daniel Webster. Our ninth day on the water today. In our first six days on the water we had 27 sightings of 10 species of odontocetes (including 10 sightings of short-finned pilot whales). In the last three days we’ve had two sightings (one group of spinner dolphins and one group of spotted dolphins). Killer whales were seen in the area a few days ago, perhaps partly responsible for the paucity of sightings? 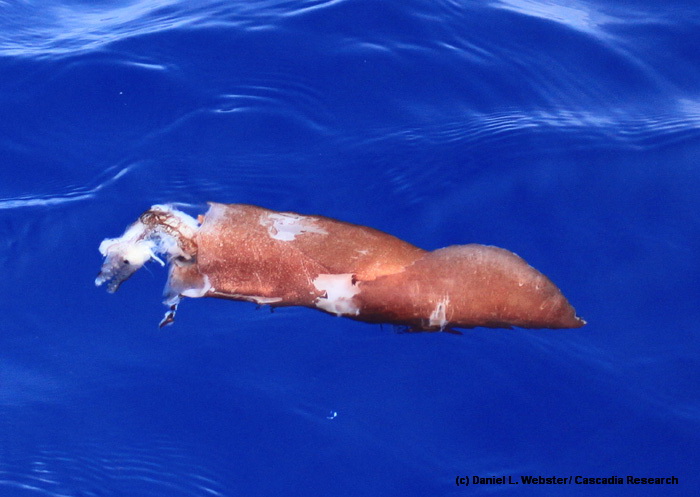 Squid collected April 15, 2010. Photo by Daniel Webster. Although we covered 120 kilometers today, most of it in deep water and with good sighting conditions, the highlight for the day was perhaps collection of our third squid for the trip. 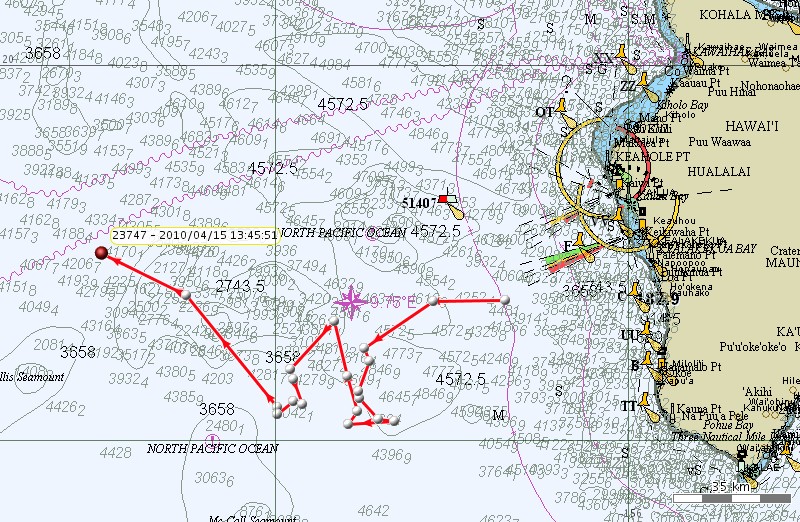 A spinner dolphin spinning, possibly to try to remove the small remora visible between the pectoral flippers, April 15, 2010. Photo by Russ Andrews. 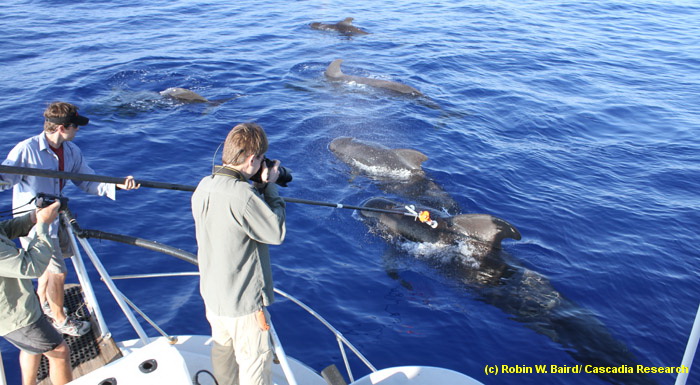 Deploying an ECG tag on a short-finned pilot whale, April 13, 2010. Photo by Robin Baird. Yesterday we deployed a short-term ECG (electrocardiogram) tag on a pilot whale, as part of a collaborative project to study diving physiology with Russ Andrews of the Alaska SeaLife Center/University of Alaska Fairbanks. To help recover the tag it had both a VHF radio transmitter and a satellite transmitter on-board – we knew the tag came off this morning just after 5 AM by monitoring the satellite data, and we were able to recover the tag before 8 AM using the VHF transmitter. 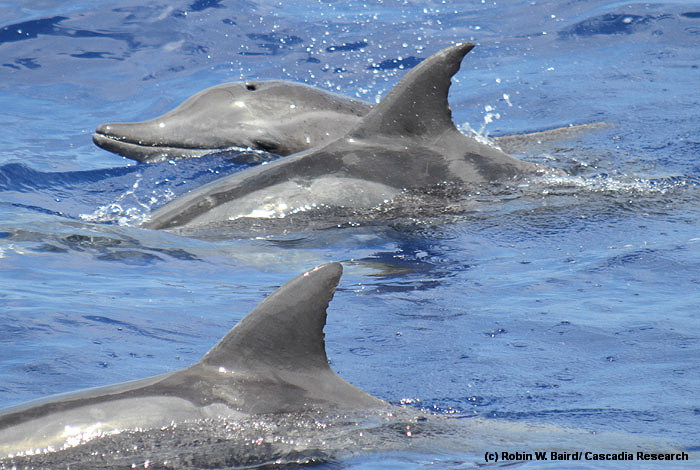 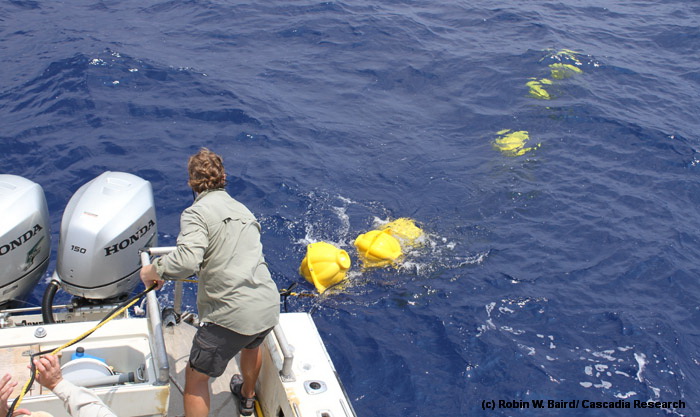 Recovering the HARP (High-frequency Acoustic Recording Package), April 13, 2010. Photo by Robin Baird. This HARP has been deployed since our December 2009 project, recording most species of cetaceans as they’ve moved along the Kona coast. 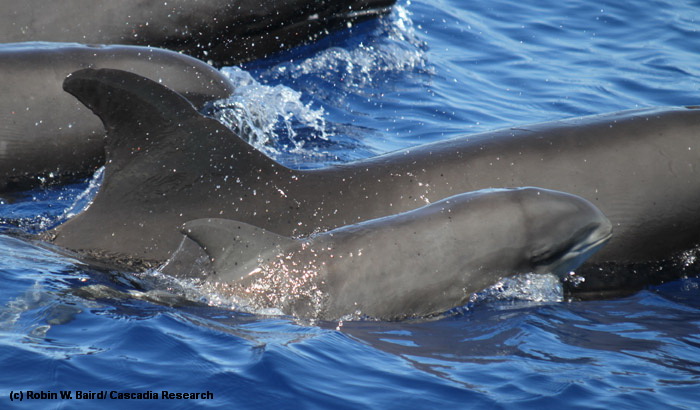 Another good day on the water. We encountered our eighth (spinner dolphins), ninth (melon-headed whales) and tenth (bottlenose dolphins) species of odontocetes for the trip – 10 species in 5 days, perhaps a new record for our work. The melon-headed whale group contained about 145 individuals, including at least three very small calves (with fetal folds).

Melon-headed whale with distinctive dorsal fin, April 12, 2010. Photo by Daniel Webster. We were able to photo-identify many of the individuals present. Work by Jessica Aschettino at Hawai‘i Pacific University, using photos we’ve been collecting since 2002, is showing the presence of two populations in Hawaiian waters – the well marked individual above is HIPe1521 in our catalog, and the mother in the top photo is HIPe0665, both individuals from the Big Island ‘resident’ population. 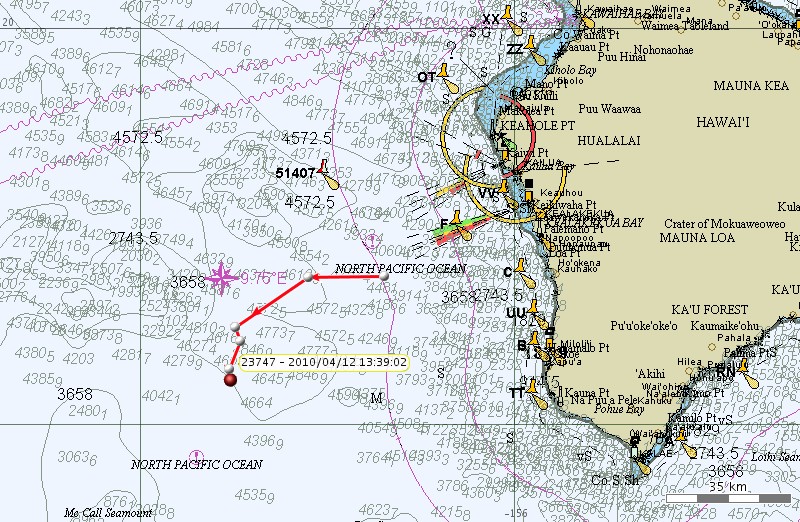 One day of movements of a satellite-tagged sperm whale. See below for details.

Our fourth day on the water for this trip. We covered an area out to about 45 kilometers from shore in water over 4,500 m deep, encountering our fifth, sixth and seventh species of odontocetes for the trip – rough-toothed dolphins, striped dolphins, and sperm whales (as well as encounters with short-finned pilot whales and pantropical spotted dolphins).

Sperm whale with satellite tag, April 11, 2010. Photo by Daniel Webster. We were able to deploy a satellite tag on one of the sperm whales in the group, to track movements. In the photo above you can see the satellite tag at the base of the dorsal fin. This individual appears to have previously experienced an attack by killer whales, with a series of tooth rakes on the dorsal fin and back immediately in front of the tag. The lighter grey areas of skin in front of, above and behind where the tag is attached are areas were the outer layer of skin has recently sloughed off. 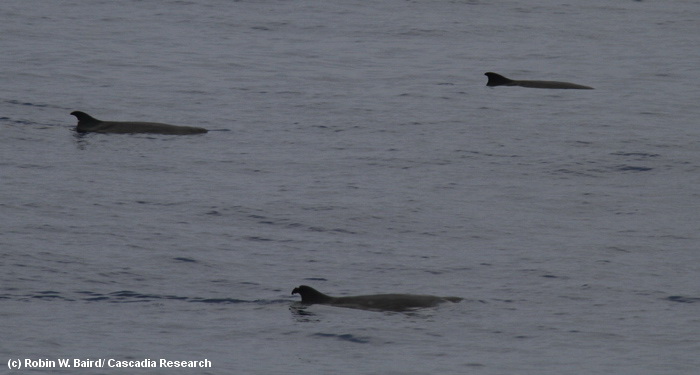 Today we covered 155 kilometers of trackline off the Kona coast, first heading north from the harbor before turning offshore and south as the sea conditions picked up to the north. We encountered two groups of short-finned pilot whales and a group of pantropical spotted dolphins, and were able to photo-identify all the pilot whales and some of the spotted dolphins. The highlight of the day was a group of three dwarf sperm whales. We tracked the group for 25 minutes and photo-identified all three individuals present, then left the group to continue our survey. Two of the three were marked individuals – although our catalog size for this species is small, we have a high re-sighting rate so hope one or more will be in the catalog.

Day 2 on the water for this trip (and this year), we have had two encounters with short-finned pilot whales, one group of pantropical spotted dolphins, one (distant) Cuvier’s beaked whale, and a lot of seabirds. Today we found two floating squid, one being scavenged on by two sooty shearwaters. 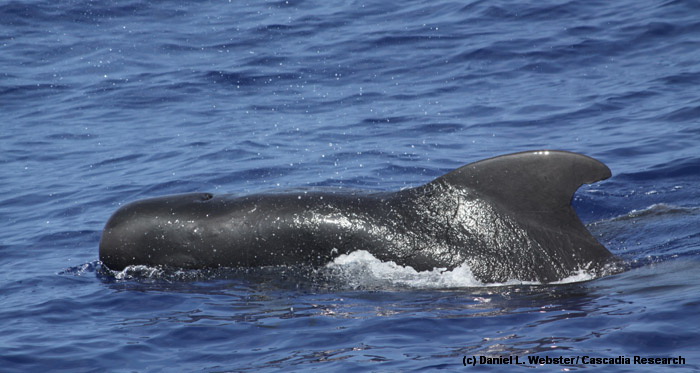