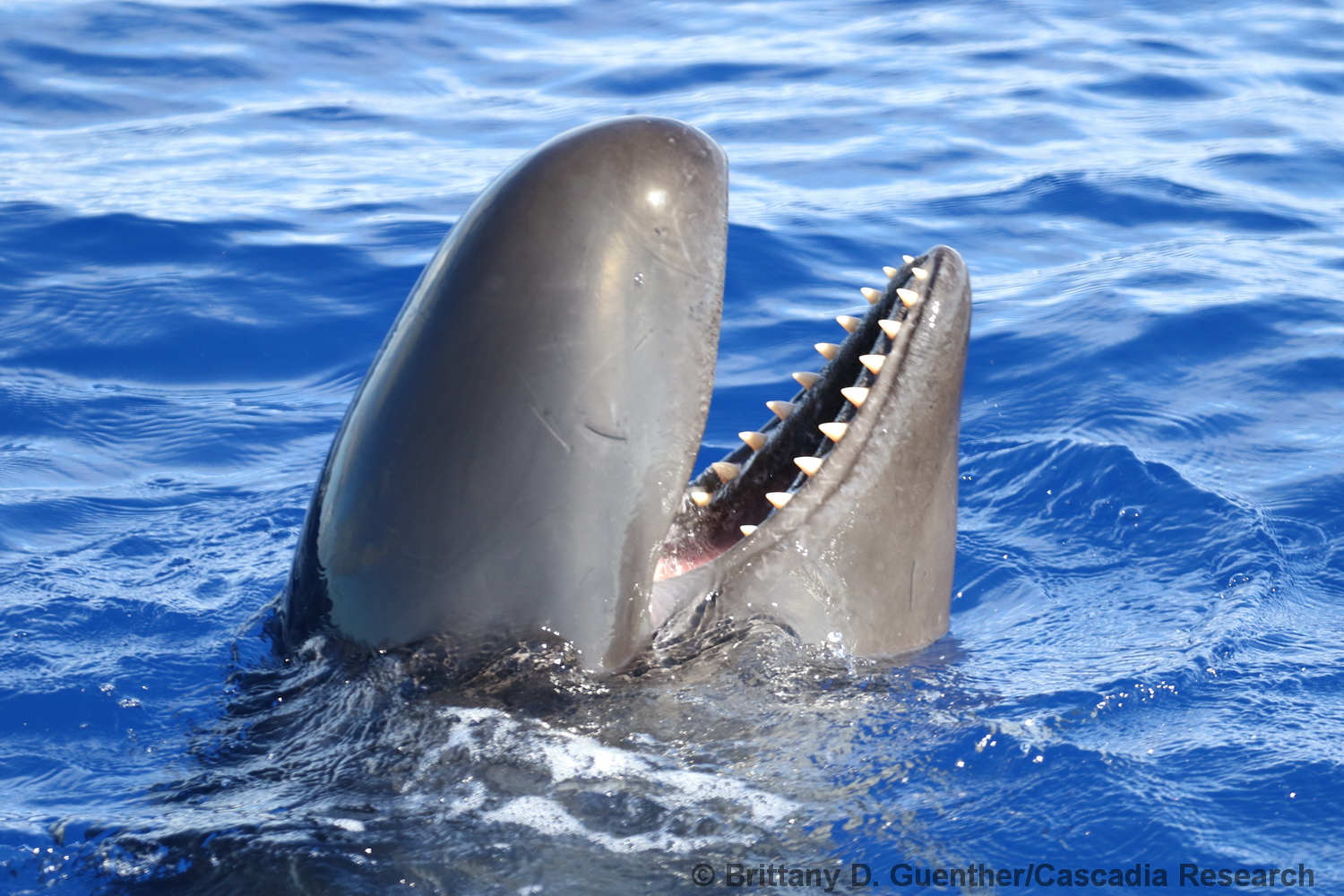 We are starting our field work in 2021 with a project off Hawai‛i Island, expected to start April 30th. This project will involve going out daily with two boats (weather permitting) working in concert, to be able to survey offshore more effectively. The project is being funded by a grant from the Pacific Islands Fisheries Science Center, with the primary goal of finding and tagging pelagic false killer whales. This will not be an easy task (although our team was successful at tagging one last year!), but we hope that having two boats work 5-10 km apart and effectively cover a lot more water will increase the chances of us finding pelagic false killer whales. Like always, we’ll work with every species we encounter, although how much time we spend with each species will vary based on research priorities. We are hoping working offshore that we might find some of the offshore species, like Risso’s dolphins or Fraser’s dolphins, and hoping that we may find insular false killer whales and other high priority species like pygmy killer whales and dwarf sperm whales inshore.

From April 30 to May 9th we had two boats out every day, and combined covered 3,009 km of search effort off the west coast of the island. Between the two boats we encountered 59 groups of odontocetes, representing 10 different species, with both boats present for six of the encounters. We took over 48,000 photos, deployed one satellite tag on a bottlenose dolphin, and collected three squid and five biopsy samples (all the biopsy samples were of Blainville’s beaked whales). 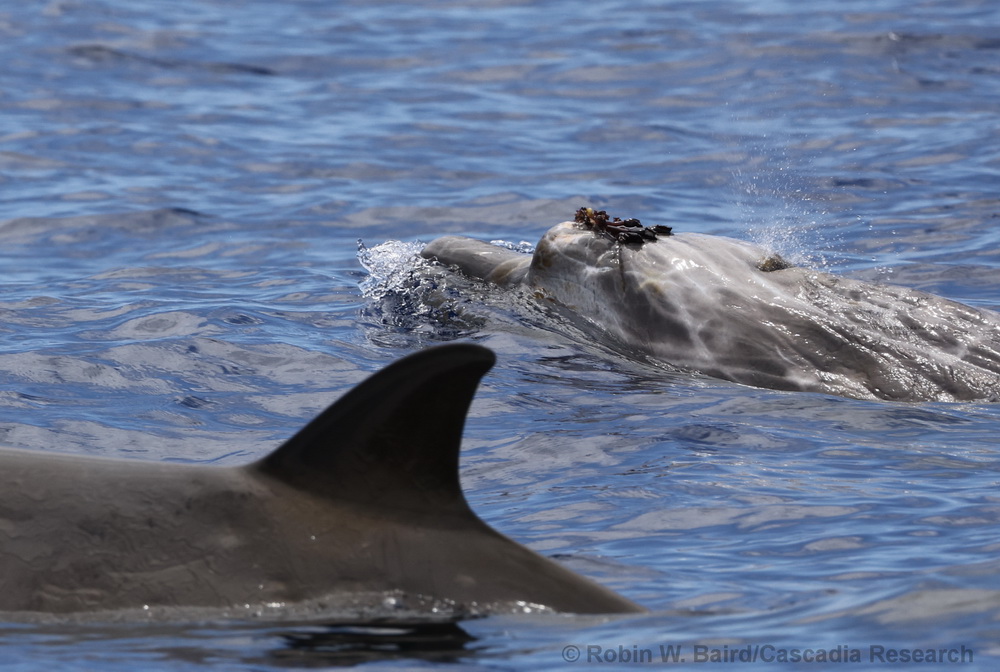 Although we obtained ID photos that will be contributed to seven different photo-ID catalogs, probably the scientific highlight of the trip was four encounters with Blainville’s beaked whales, including the group with the entangled individual. Although there were some individuals in concert between several of the encounters, we think we’ll have ID photos of more than 10 different individuals, and biopsy samples from five of them, that will be contributed to a large-scale collaborative effort on beaked whale genetics. If you want to learn more about beaked whales in Hawaiian waters check out this book chapter published in 2019. 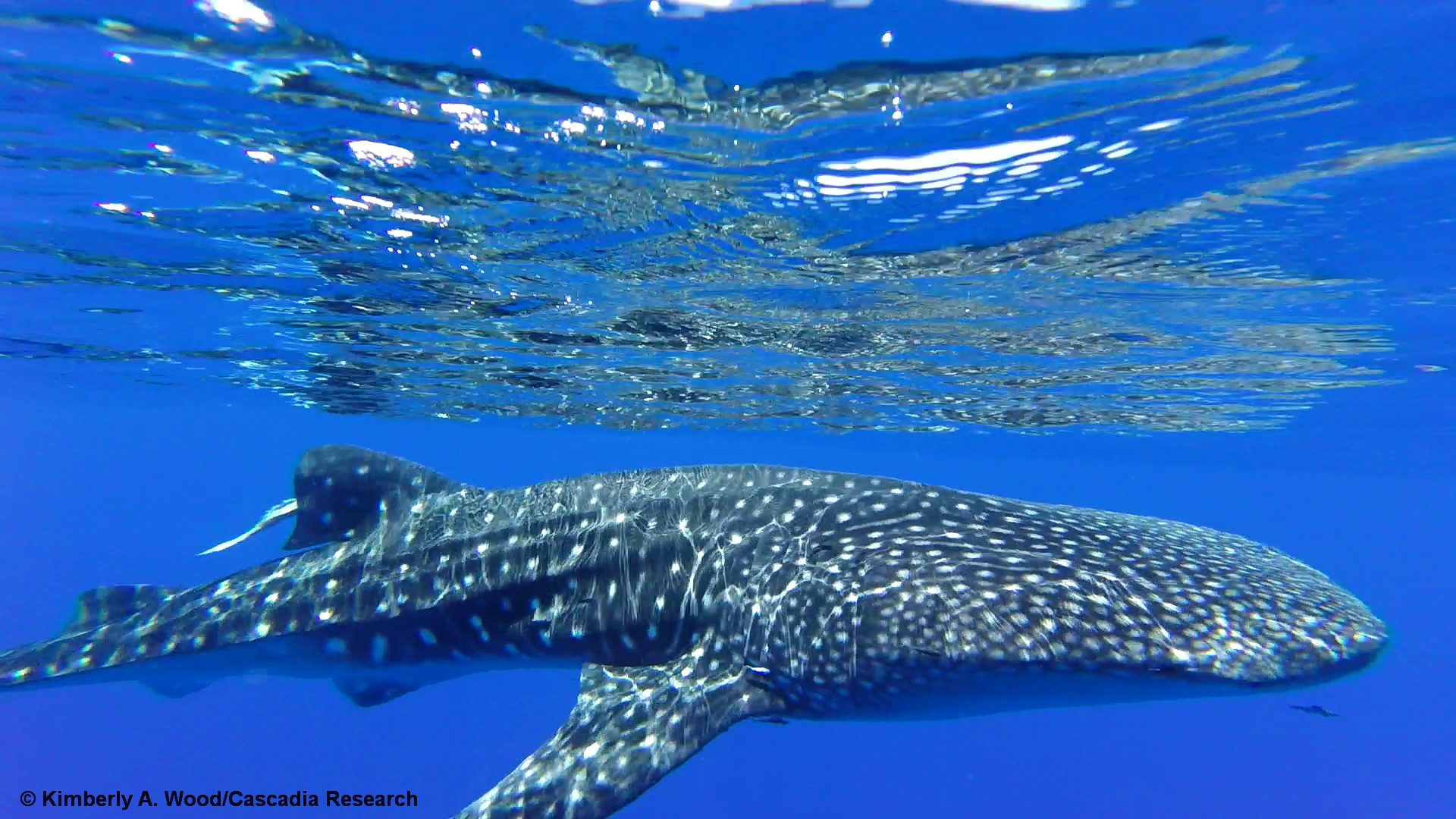 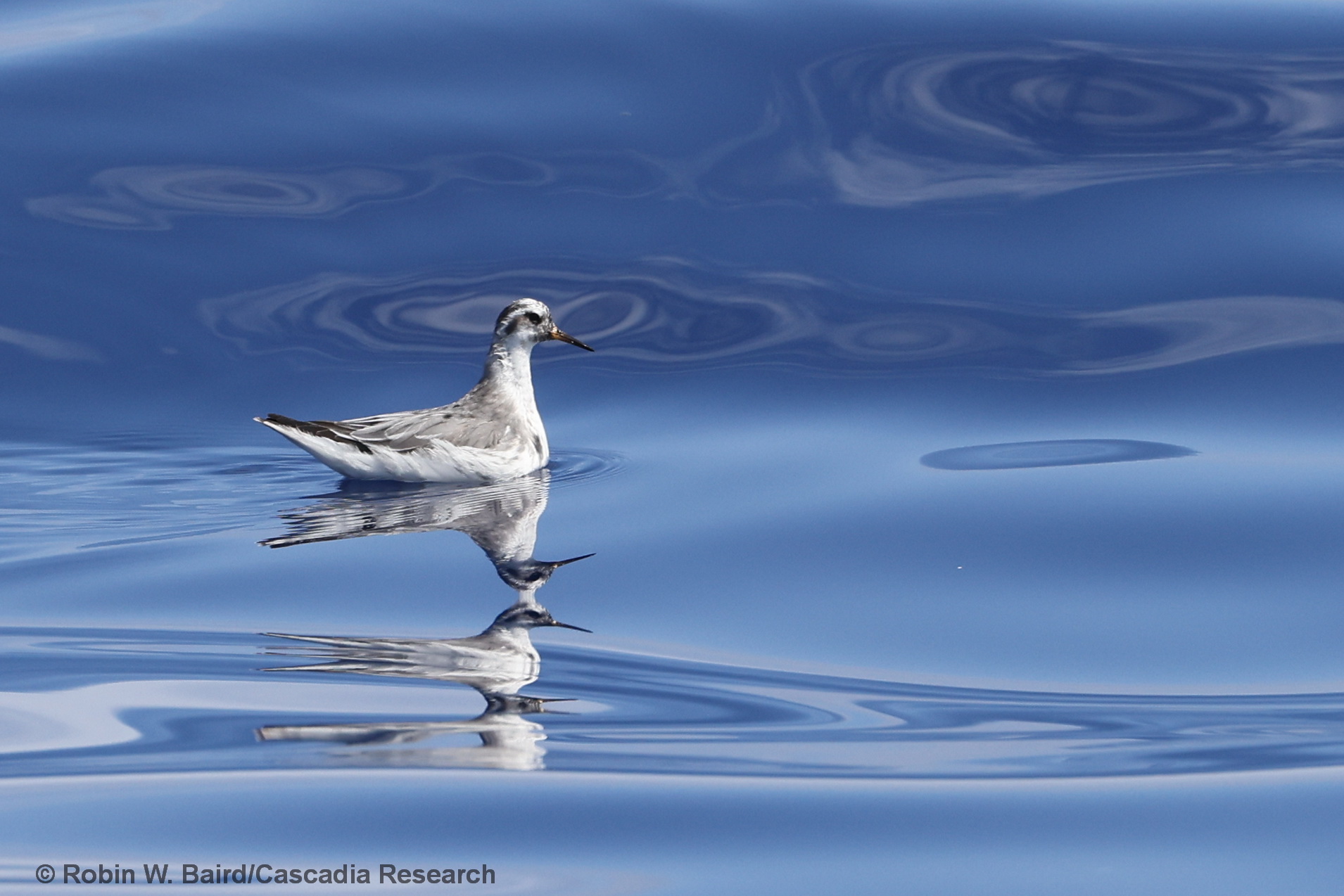 As usual, we also recorded and photographed seabirds during this trip, and will be passing on those photos to Peter Pyle at the Institute for Bird Populations for species confirmation. The bird above is a Red Phalarope, a migratory species. 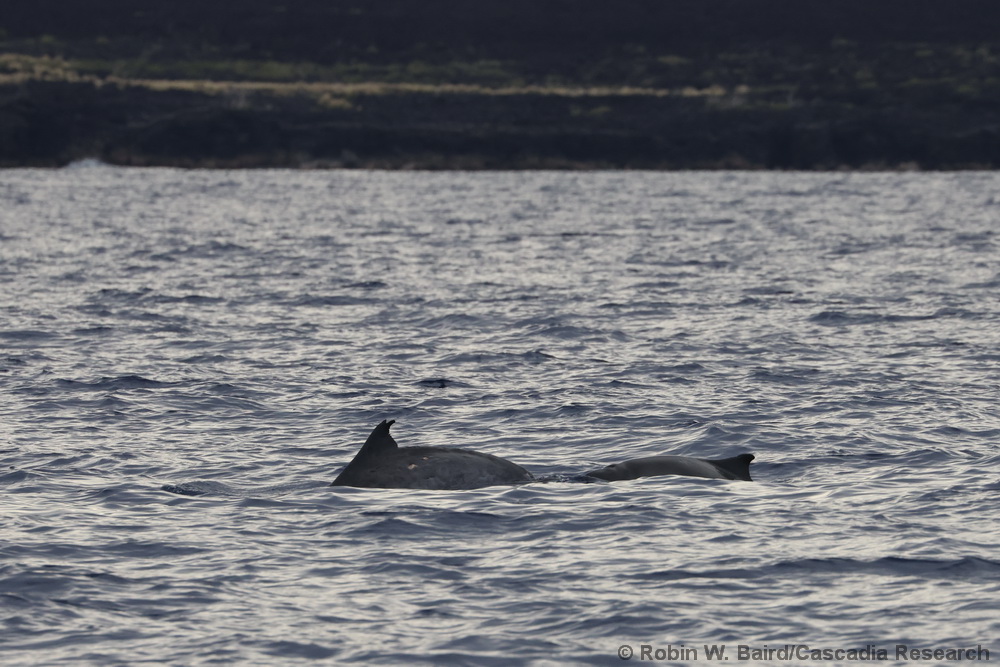 Today we encountered a large group (at least eight individuals) of dwarf sperm whales, and were able to get good identification photos of at least seven individuals. There is a small resident population of dwarf sperm whales off the island, although they are rarely seen and photographed — this species is very cryptic, hard to detect, and easy to lose. This species is very shy of boats, and it requires a lot of patience to get close enough to get good photos.The group today was spread out over several hundred meters, and included at least two mother/juvenile pairs, like the individuals above. 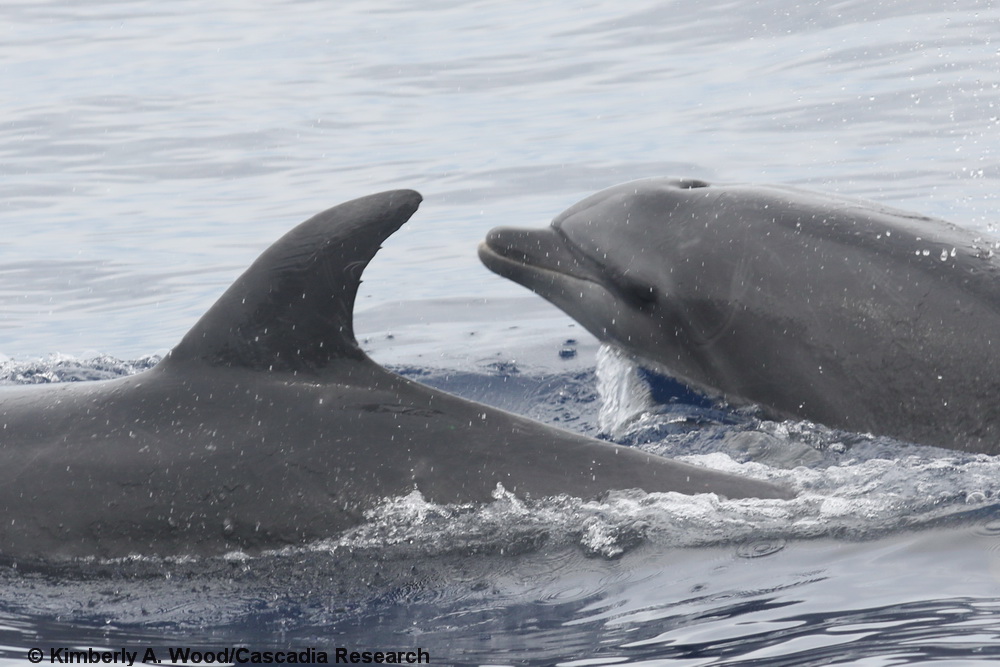 We also encountered a fairly large group (~20 individuals) of bottlenose dolphins off the central Kona coast, and were able to get good identification photos of most individuals. Coincidentally, today we published a collaborative paper on abundance and trends of bottlenose dolphins in Hawaiian waters, showing evidence of declines in three of the four recognized island-associated stocks. The photos we obtained today will help in understanding how this population is doing over time. If you are interested in a copy of the paper, it is available open access on the website of the journal Endangered Species Research. 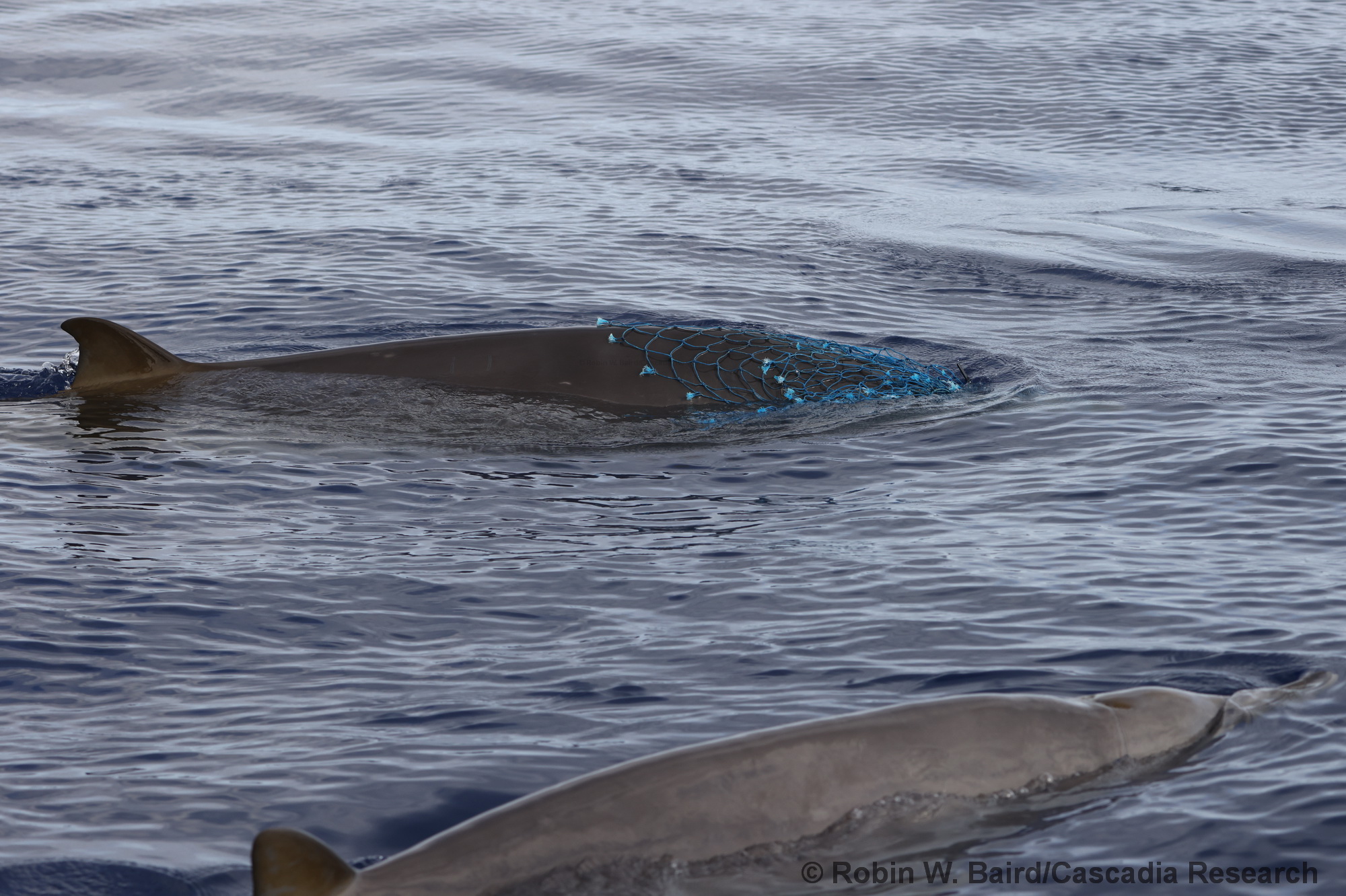 Today we encountered a group of Blainville’s beaked whales, with one individual entangled in marine debris. From GoPro footage over the side of the boat we were able to confirm the entanglement is life-threatening, preventing the individual from feeding. We have been working with NOAA Fisheries to develop a disentanglement plan, and we’ll be searching through the primary area for Blainville’s off the island over the rest of the project and hope we have an opportunity to re-encounter this individual. 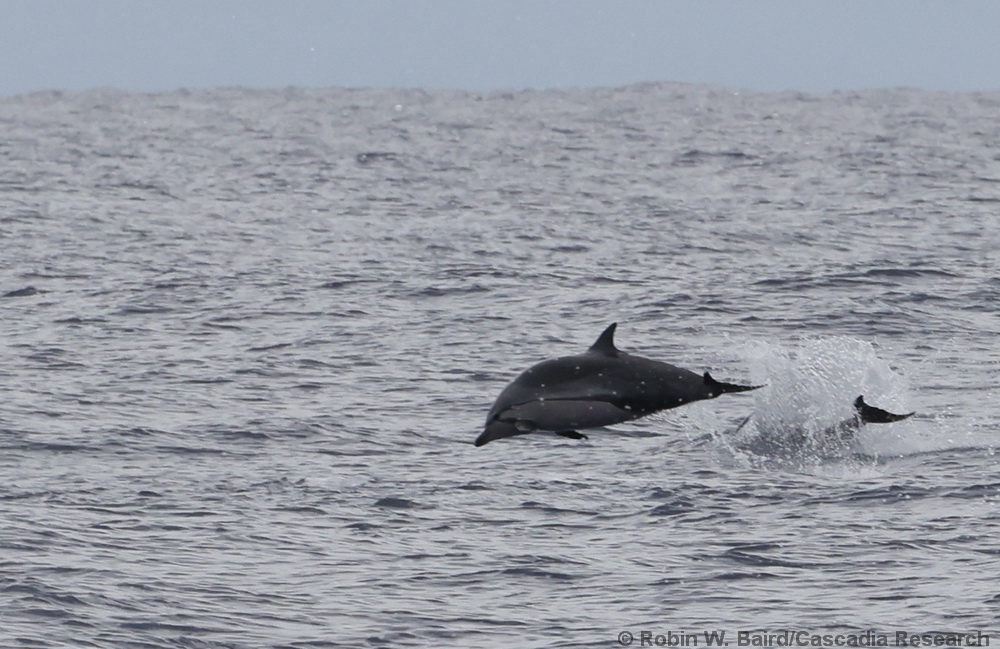 While searching offshore later in the day we also encountered a group of striped dolphins, our ninth species of odontocete for the trip. Striped dolphins in Hawaiian waters are pelagic — part of a broadly-ranging open ocean population. 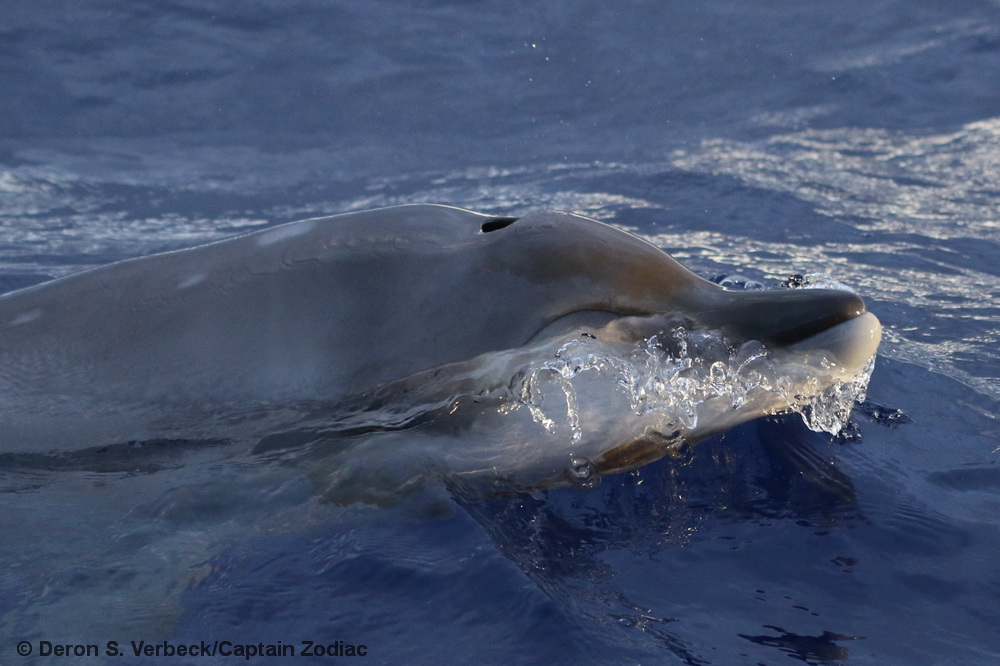 On day four of the project we are up to nine species of odontocetes documented, with two new species seen today. These photos are of Blainville’s beaked whales – above is a curious juvenile approaching the research vessel. There is a small resident population of Blainville’s off the island, and we recognized at least one of the individuals in the field as part of this population. 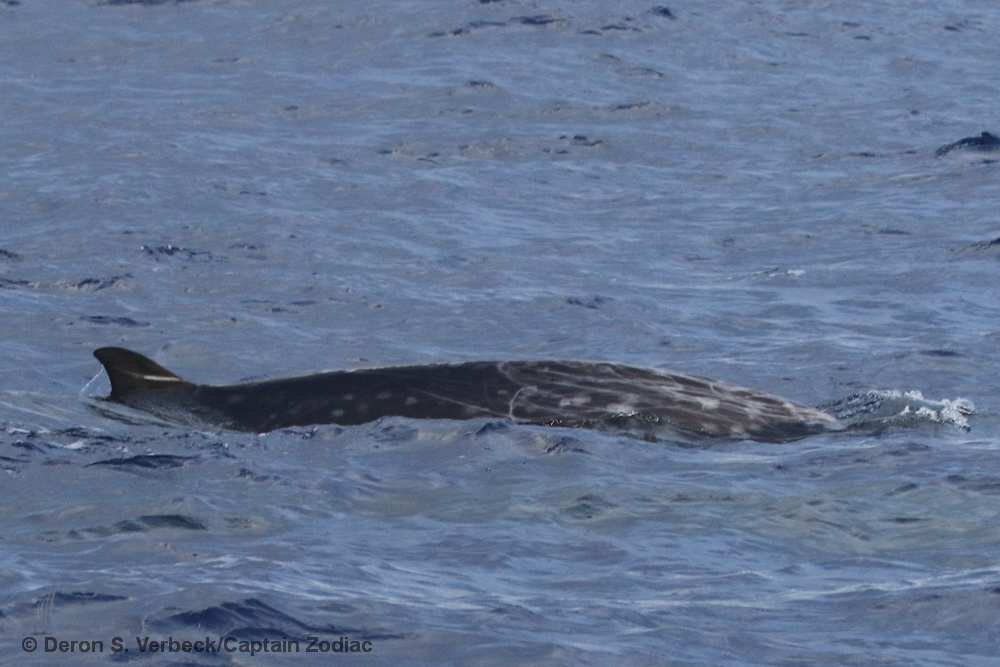 Adult male Blainville’s can be distinguished from females both based on the erupted teeth visible when their head first breaks the surface, and by the extensive linear scarring caused by fighting with other adult males, visible on the individual above. The white oval scars are from healed bites from cookie-cutter sharks. 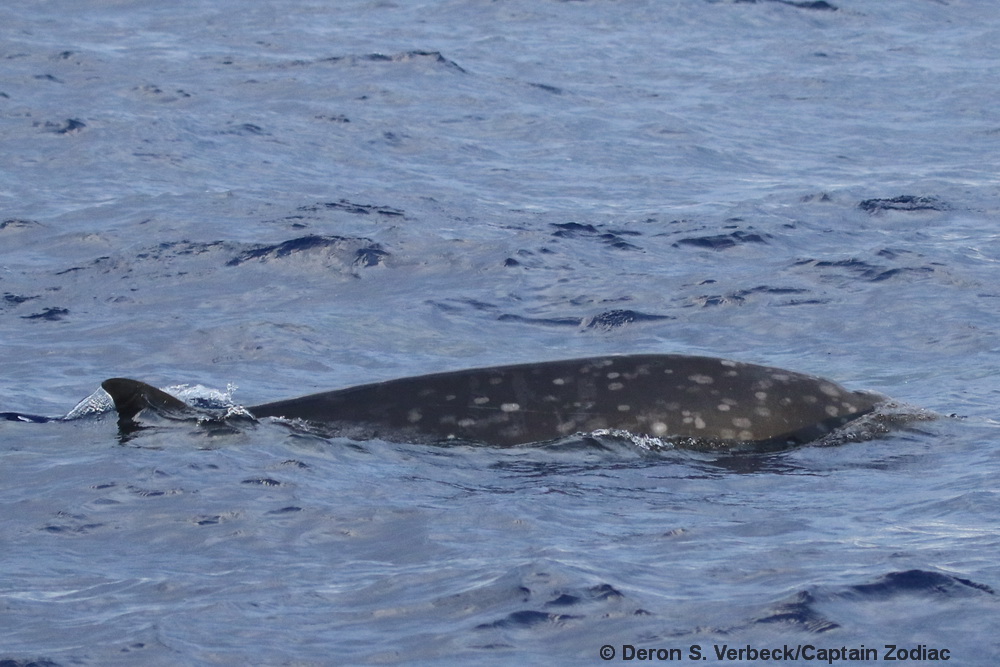 In Hawaiian waters adult females can be identified by the large number of white oval scars (which accumulate over time, reflecting age), but a lack of the linear scars seen on adult males. 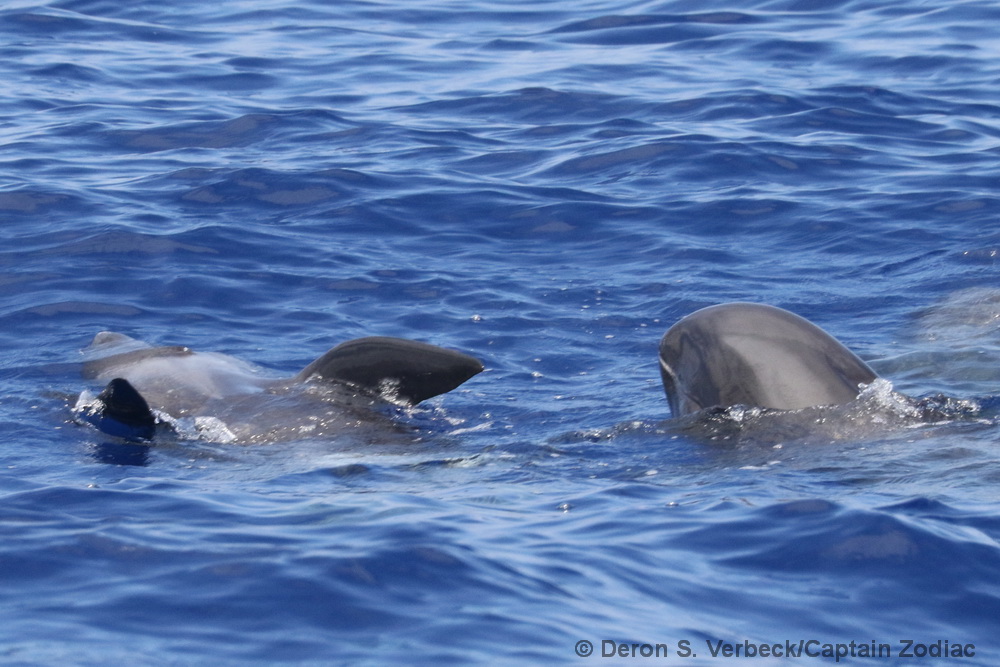 Weather conditions are still allowing us to work far offshore, and while we haven’t encountered any false killer whales, we’ve had high species diversity and good encounters with many species. In addition to a small group of pygmy killer whales, today we had a large group of melon-headed whales (shown above and below). There were about 100 individuals in the group, a relatively small group for this species (average group size is about 250 individuals). The individual below has a wound caused by a cookie-cutter shark bite on the head. 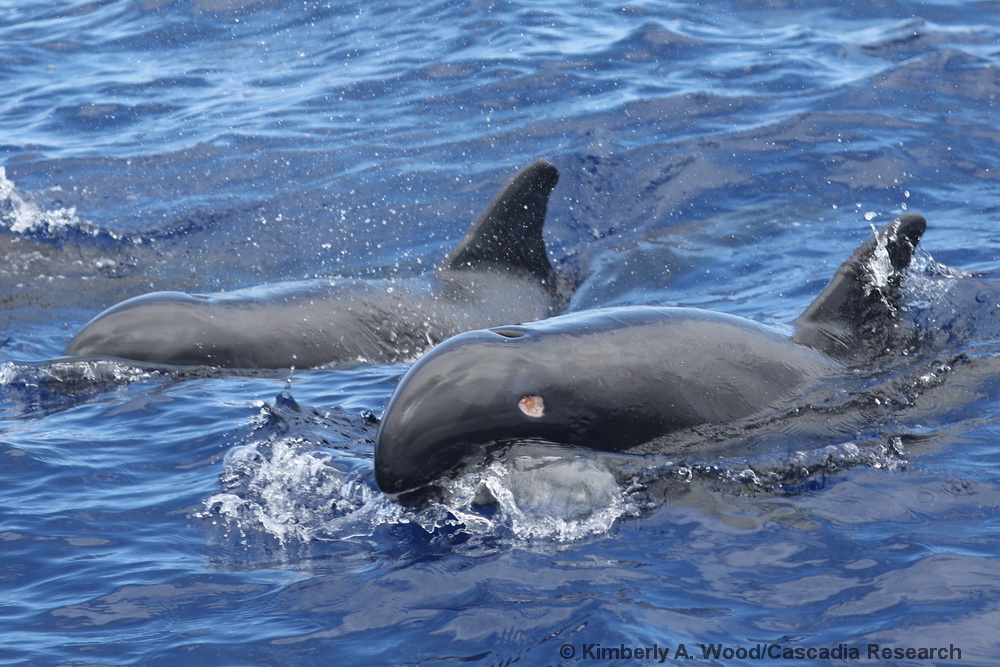 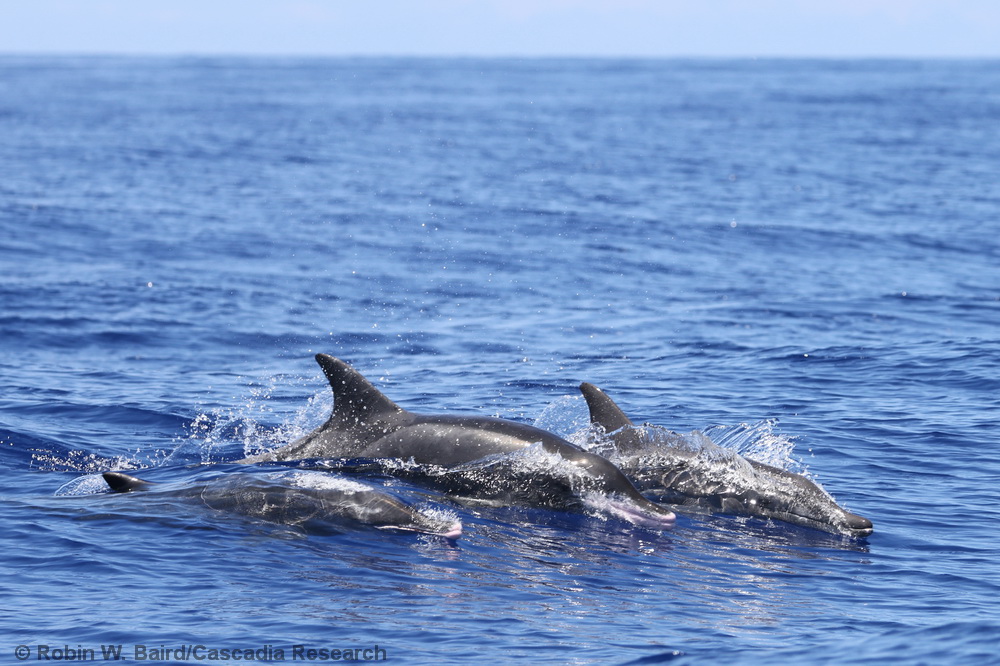 We had a good first day on the water, working out many of the logistics of coordinating two boats working together, but not too close together. Between the two boats we encountered short-finned pilot whales, pantropical spotted dolphins, spinner dolphins, and a group of rough-toothed dolphins (shown above), as well as a whale shark, a hammerhead shark, and lots of good birds! We were able to get good identification photos of the rough-toothed dolphins for comparison with our photo-identification catalog.