We will be undertaking an 11-day field project off Hawai‘i Island starting April 17, 2018, primarily funded through a grant from the Office of Naval Research to Wildlife Computers and Marine Ecology and Telemetry Research (MarEcoTel), with additional support from a grant from the Pacific Islands Fisheries Science Center to Cascadia. This will be our 17th year of working off the island, and our first field project there in 2018. The primary goal for this work is the deployment and recovery of a new Sound and Motion Recording Telemetry (SMRT) tag on short-finned pilot whales, being developed by Wildlife Computers, Dr. Russ Andrews (MarEcoTel), and Dr. Mark Johnson (Univ. of St. Andrews). As usual, we’ll also be working with all species of odontocetes we encounter, trying to obtain photos for our Hawai‘i photo-identification catalogs (12 species and counting), and we may also collect biopsy samples for studies of genetics, toxicology, and hormone chemistry of several species. Additionally, we also have funding for satellite tags from Dolphin Quest, and hope to deploy tags on one or more of false killer whales, bottlenose dolphins, pantropical spotted dolphins, rough-toothed dolphins, or other species we encounter.

The research crew for this project will include Russ Andrews from Marine Ecology and Telemetry Research, as well as Daniel Webster, Colin Cornforth, Annie Douglas, Jordan Lerma and Robin Baird from Cascadia. If you want some background information on our work in Hawai‘i we published a paper on our first 13 years of surveys and a pdf is available here 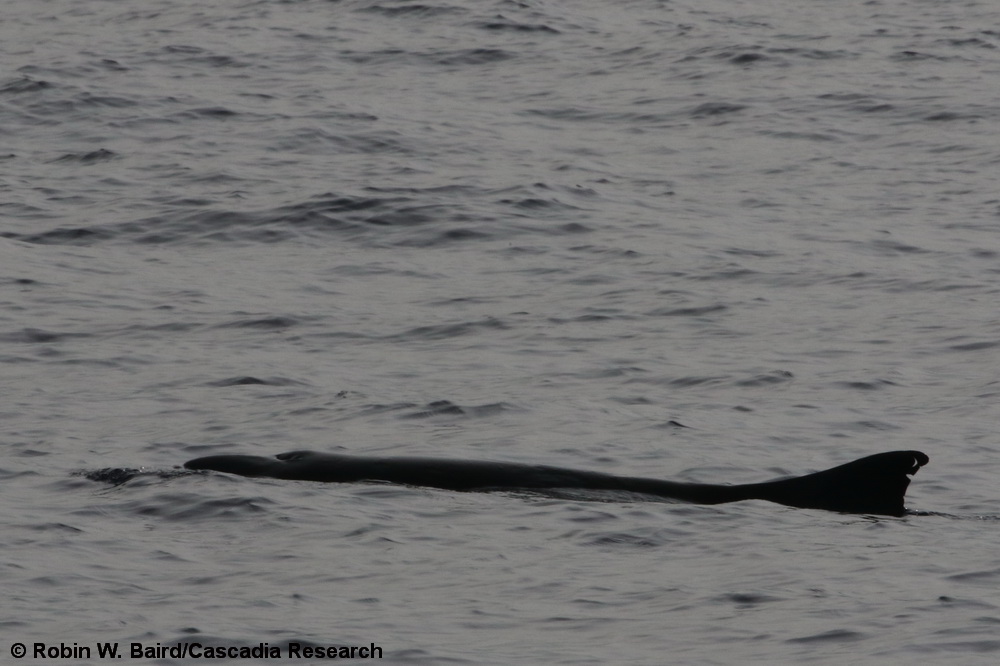 April 27th was our last day for this field project. We encountered our sixth species of odontocete for the trip today, a group of three or four dwarf sperm whales. We were able to get good identification photos of at least three of the individuals, to compare to our photo-identification catalog of this species. There is a small resident population of dwarf sperm whales that live off Kona, so we are hoping to find a match. For more information on this species check out our dwarf and pygmy sperm whale web page. 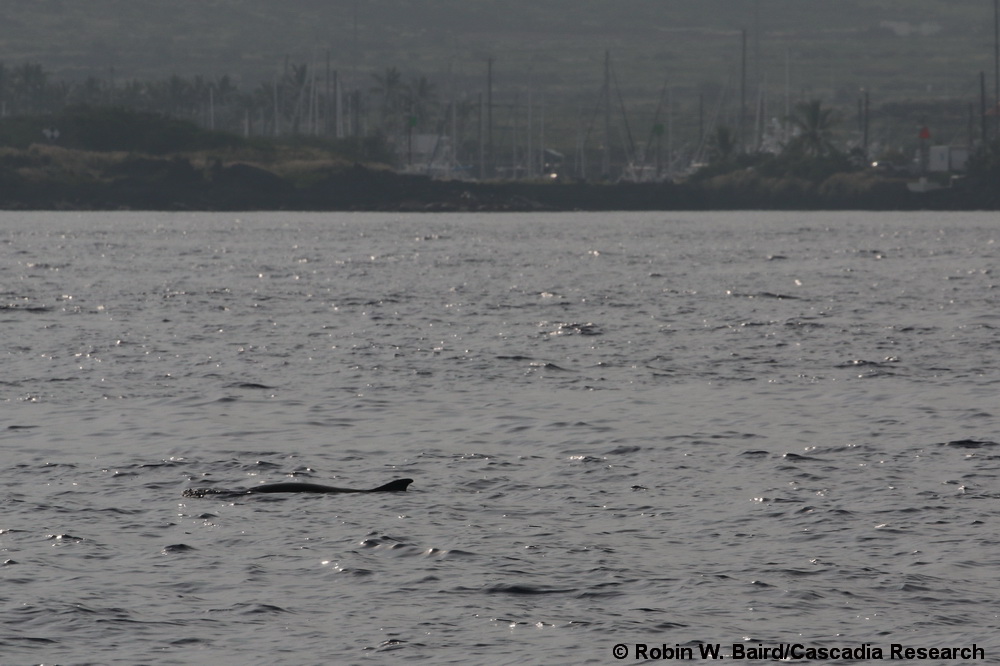 Dwarf sperm whales are typically seen in relatively shallow waters in Hawai’i, typically between 300 and 800 m depth. This individual is just offshore of Honokohau Harbor, where we launch our boat. 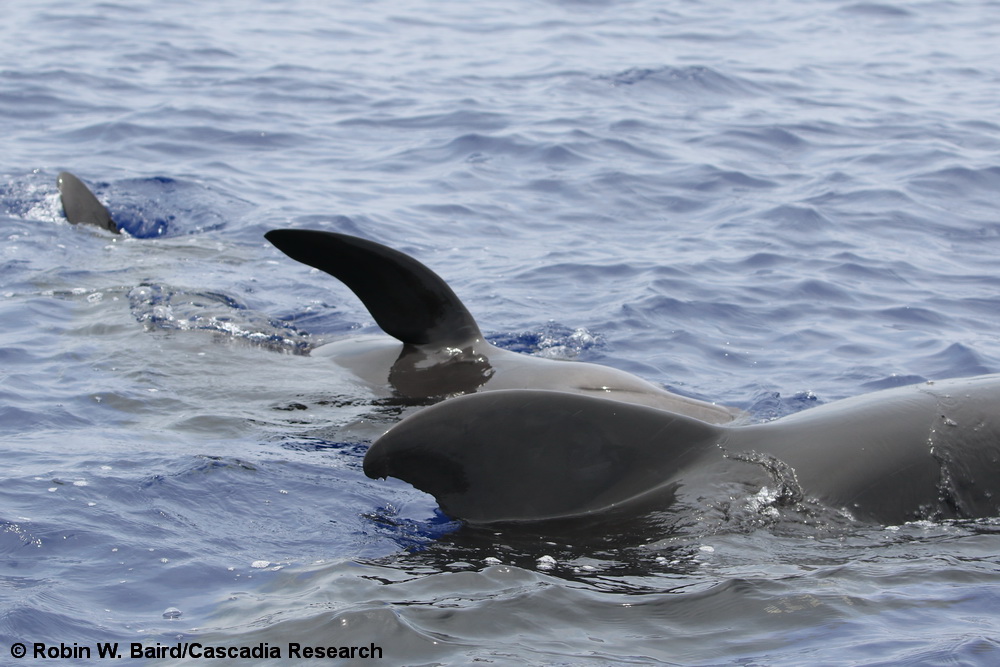 Over the last few days of the project we’ve also been able to recover three of the SMRT tags deployed on pilot whales early in the trip, one that we released from the whale using the remote release mechanism (see photos below) and two that came off the whales on their own and were recovered floating west of Kaho’olawe and Lana’i, with the assistance of the Hawaiian Islands Humpback Whale National Marine Sanctuary. This was our main goal of the project, so having these tags back will both help further refine the development of these tags and hopefully provide detailed acoustic and movement data from these individuals over a multi-day period. 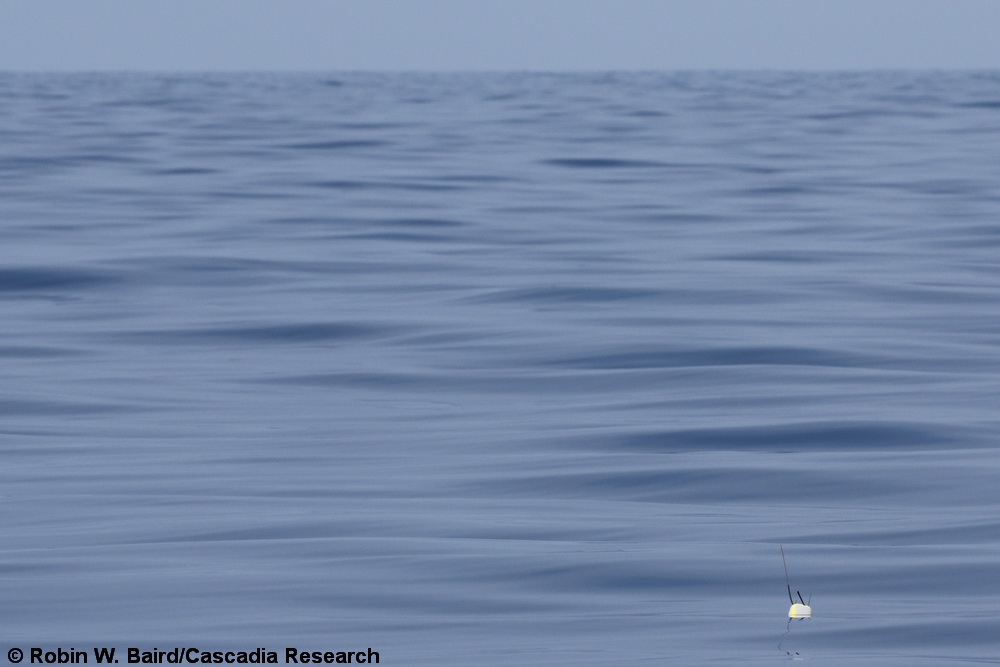 The SMRT tag floating off Kona, after release from a short-finned pilot whale, just prior to recovery. 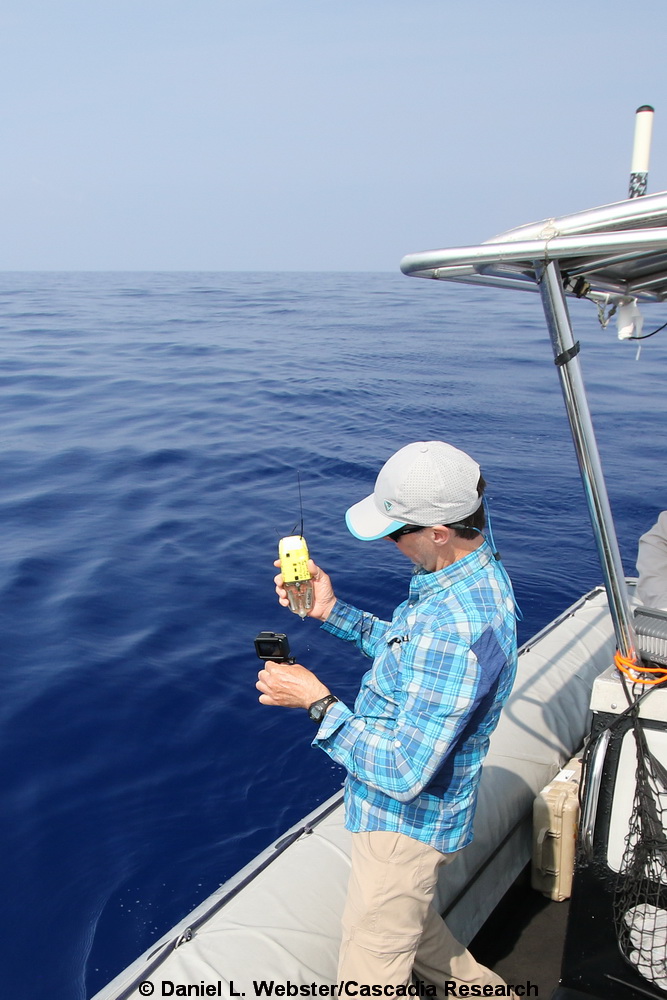 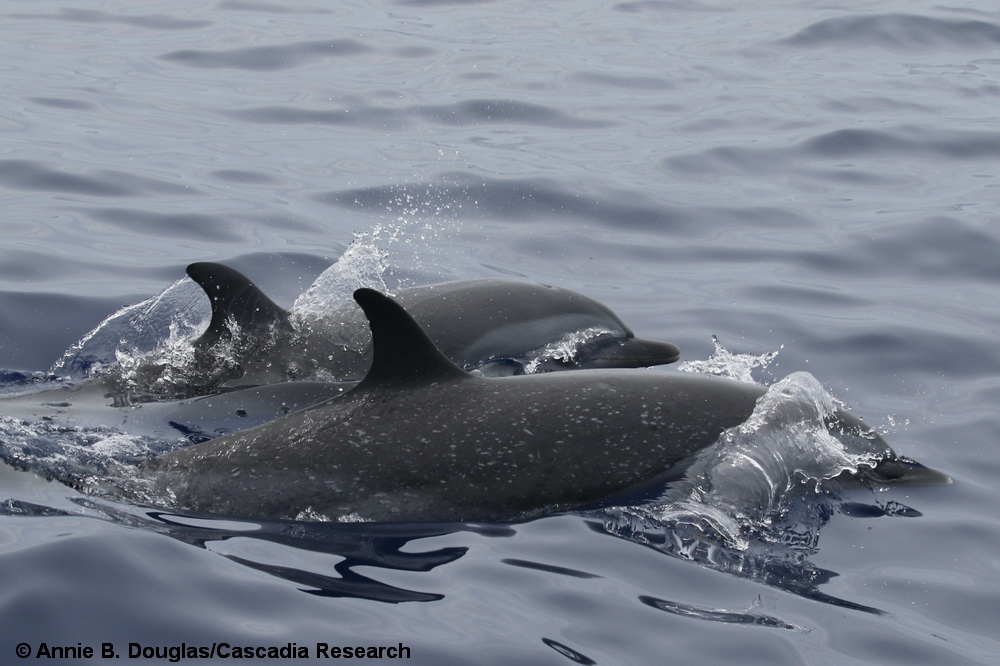 During the trip we also encountered several groups of pantropical spotted dolphins (above) and bottlenose dolphins (below), and obtained photos of both species for individual photo-identification 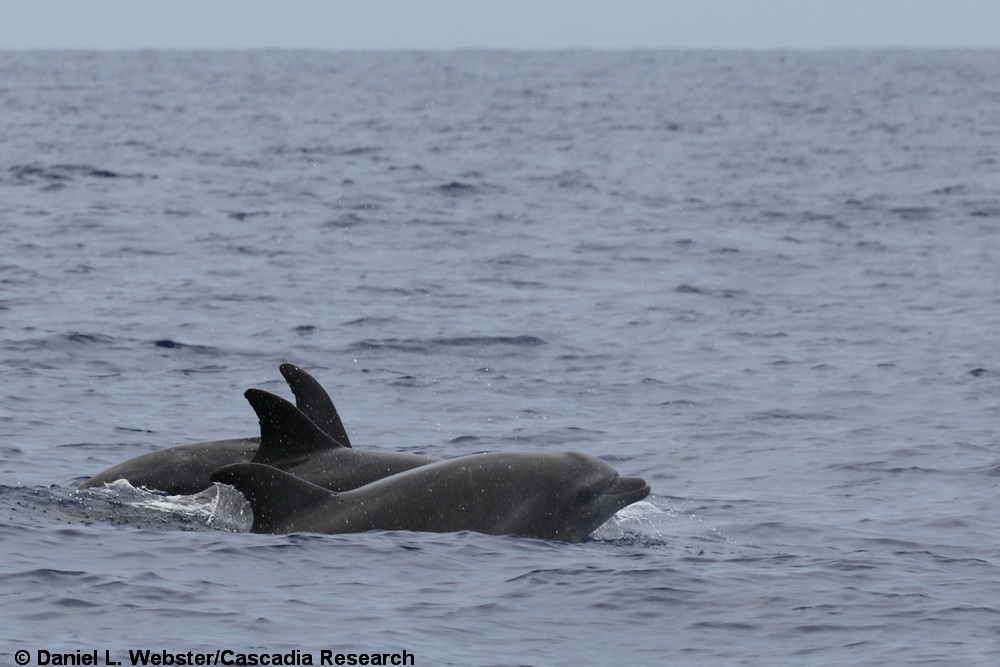 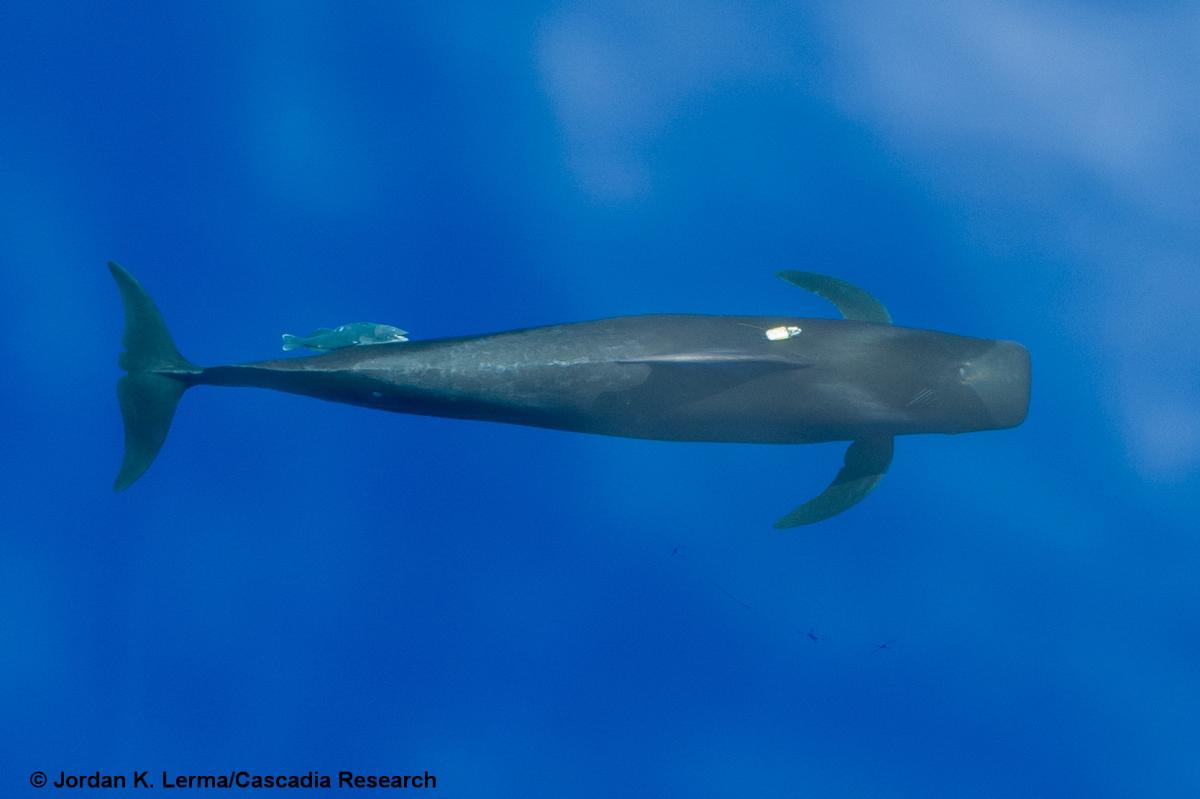 Our last field effort was our first to incorporate UAVs (Unmanned Aerial Vehicles, also known as drones) into our research, and we’ve been using a drone again this project to get aerial video and images of short-finned pilot whales. As part of our drone operations we are combining photo-ID of the individuals from the boat while simultaneously taking high resolution still photographs from a height of 50′, so we can match the drone photos to known individuals in our photo-ID catalogs.The photos allow us to get relative body size of individuals when there is more than one individual in the same frame, and if we already know the age (or age class) of one from photo-ID, it allows us to assess the relative age of the other. This type of information can be extremely important in assessing whether individuals are of reproductive age, and will eventually give us (when we have a much larger sample size!) a way of examining the age structure of a population, an important factor in understanding whether a population may be growing or shrinking. The photos can also be used to tell when an adult female has a near-term pregnancy, and can also be used to examine health status, all goals of our planned drone operations. We don’t yet have a system that can be used to precisely measure individuals, to get absolute length and body dimensions (those drones and camera systems are a bit expensive!), but the system we are using now is adding an important new dimension to our research. We are looking forward to more opportunities to get images and from a greater number of species that we have photo-identification data from.

The above photo shows an adult male short-finned pilot whale, with one of the SMRT tags on the left side at the base of the dorsal fin. You can also see a large remora on the peduncle (tail stock) of the whale. A photo of the individual from the side is shown below. 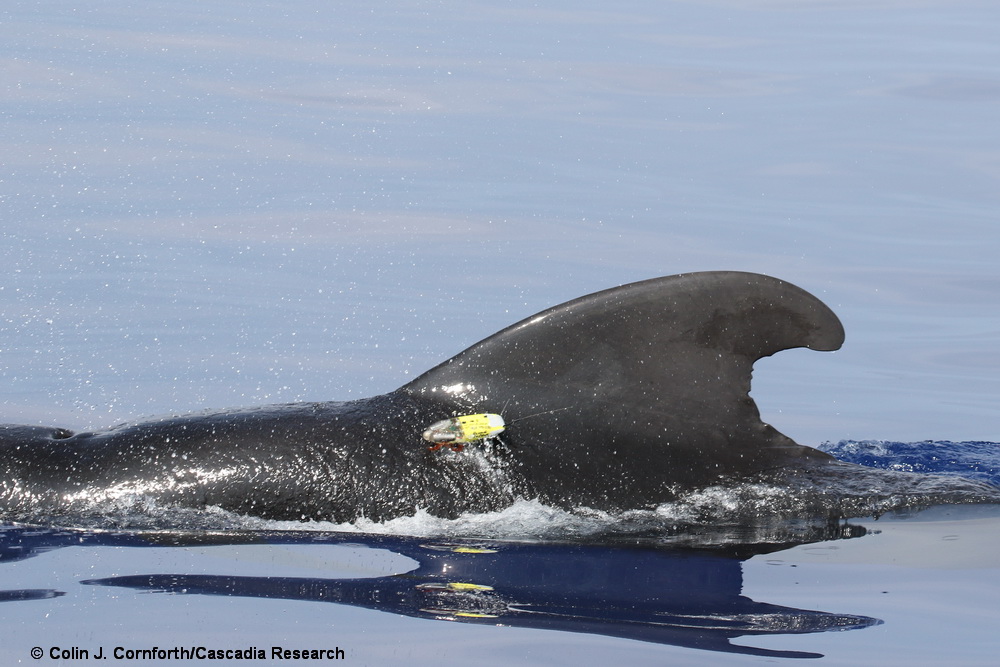 An adult male short-finned pilot whale with a Sound and Motion Recording Telemetry (SMRT) tag. See below for more information on this tag type. Over the last few days we’ve been able to deploy all five of the SMRT tags we were hoping to deploy this trip, and will now be waiting either for the tags come off to recover them (they have a timed release mechanism to come off 10 days after deployment), or we may try to trigger the release of one or more if the whales look like they might be moving out of our study area, to allow us to recover them to download the acoustic and other data. 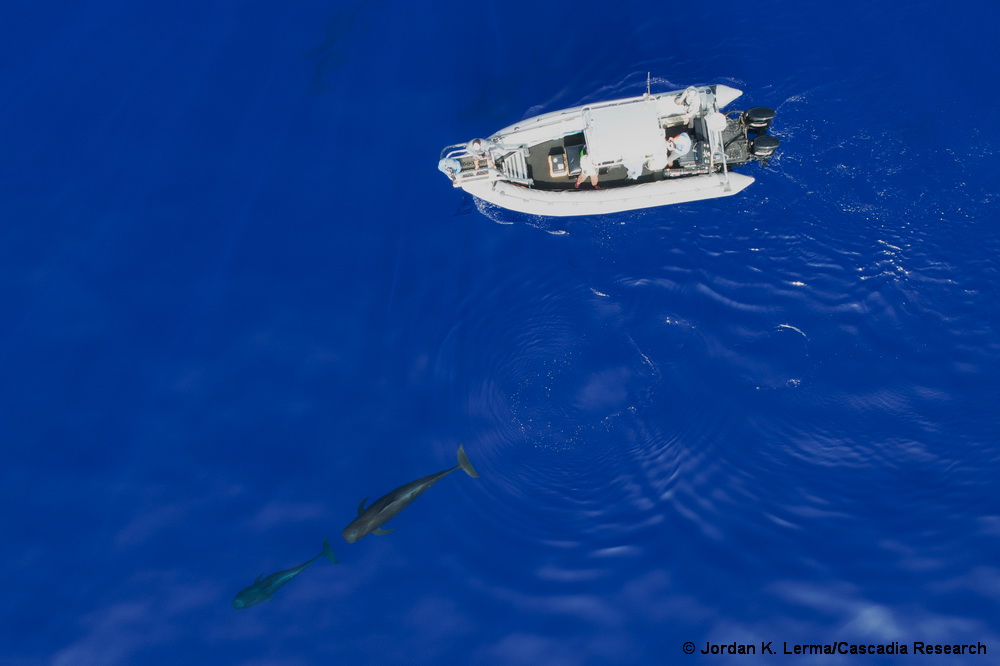 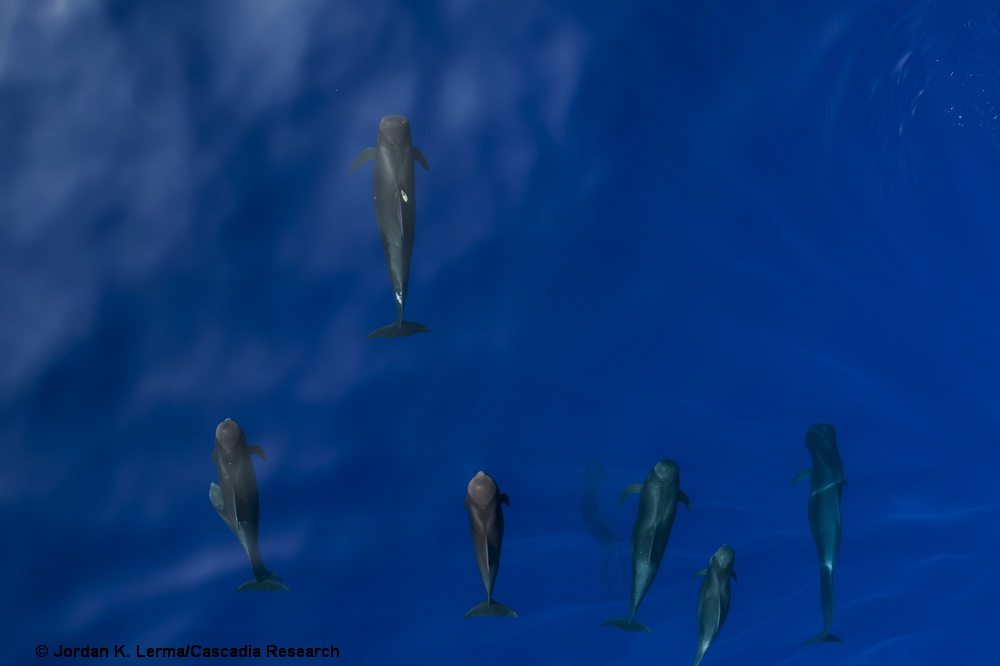 A group of short-finned pilot whales photographed from the drone. The individual in front, likely a sub-adult male, has one of the SMRT tags on the right side at the base of the dorsal fin. 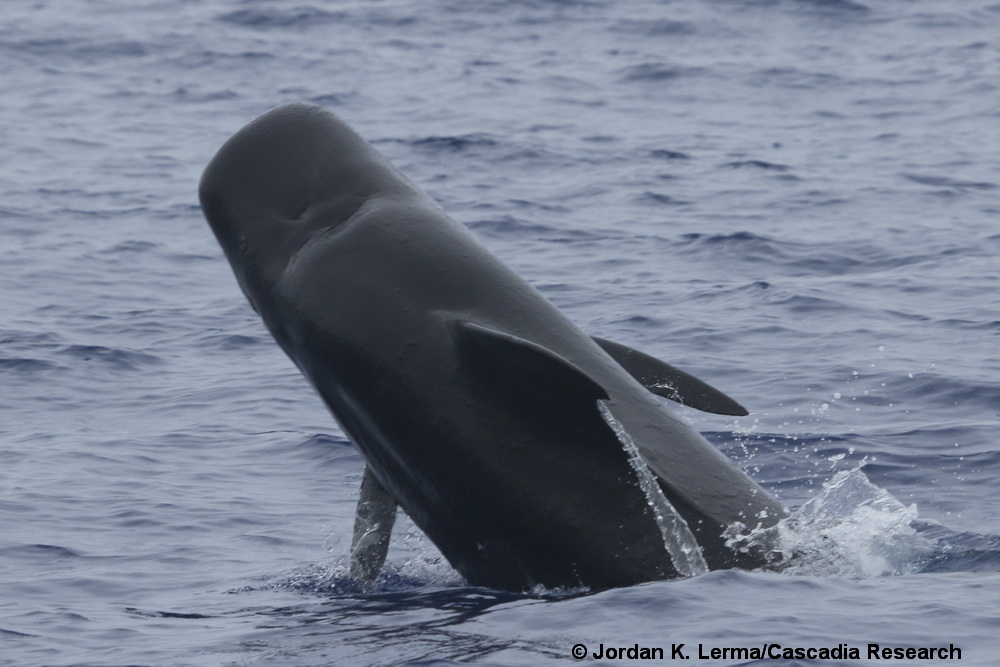 A good start to the trip, on our first day out we encountered three different groups of short-finned pilot whales, and were able to successfully deploy one of the SMRT tags (the first deployment of a fully-functional SMRT tag), as well as several LIMPET satellite tags (one on each of the three groups), to help keep track of the groups. We were hoping to tag one of the known-resident groups of pilot whales from this island, to increase the chances of getting the SMRT tag back. So at the start of each encounter we sent a couple photos back to the office, for Sabre Mahaffy, the curator of most of our Hawai‘i photo-ID catalogs, to quickly see if she recognized the groups. For all three groups this was quite successful, with Sabre able to tell us in the field (in less than 10 minutes!) whether the groups were resident (two of them were), or part of the pelagic population (the third group).

The photo above shows an adult male short-finned pilot whale, with the very square head typical of the Naisa form of this species. For more information on pilot whales in Hawai‘i check out web page on this species. 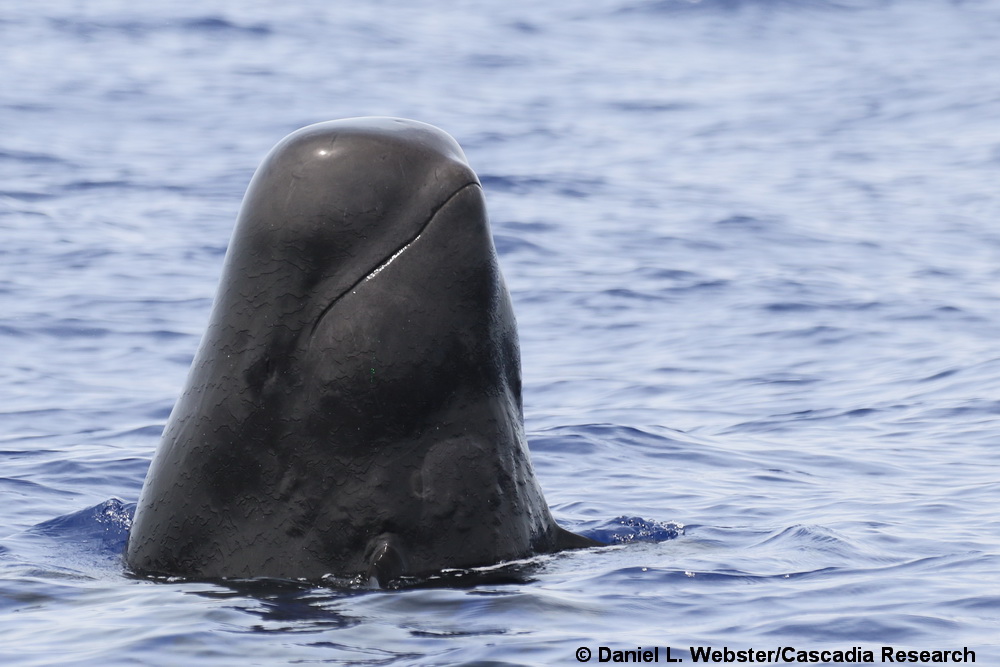 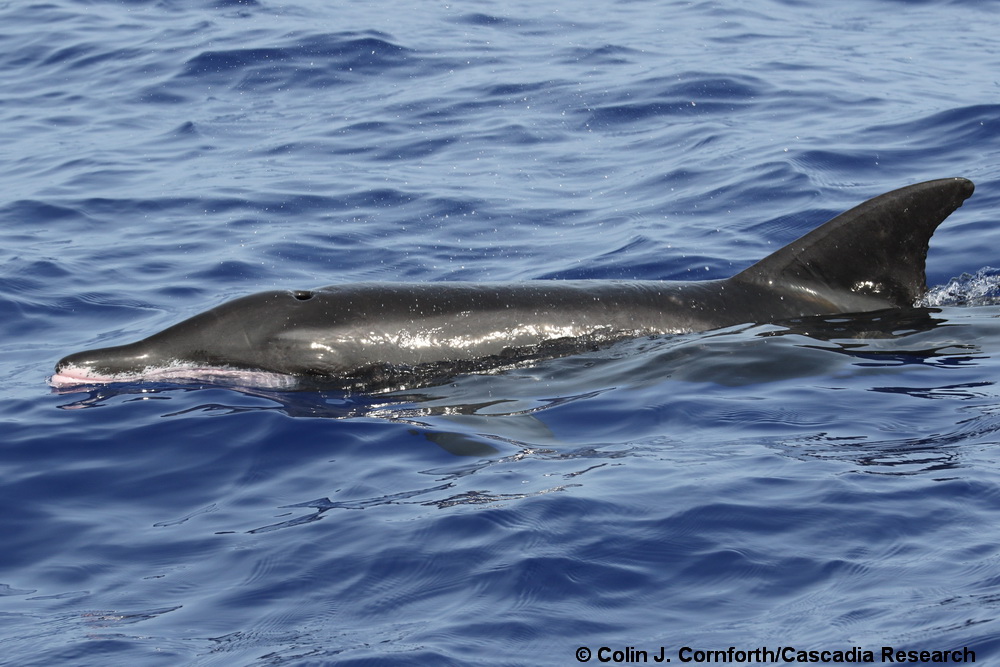 We also encountered two groups of rough-toothed dolphins, another species resident to the island. As well as photo-identifying many of the individuals present, we were able to deploy a LIMPET satellite tag to study movements. We’ve tagged a number of rough-toothed dolphins in recent years off Kaua‘i and Ni‘ihau, but this is the first time we’ve tagged any off this island, so we are excited to see where this individual goes. 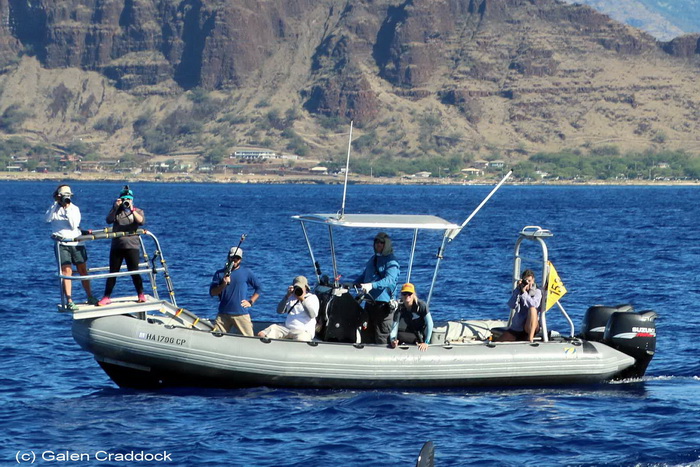 The research vessel we’ll be using for this project, a 24′ Hurricane. Photo by Galen Craddock. 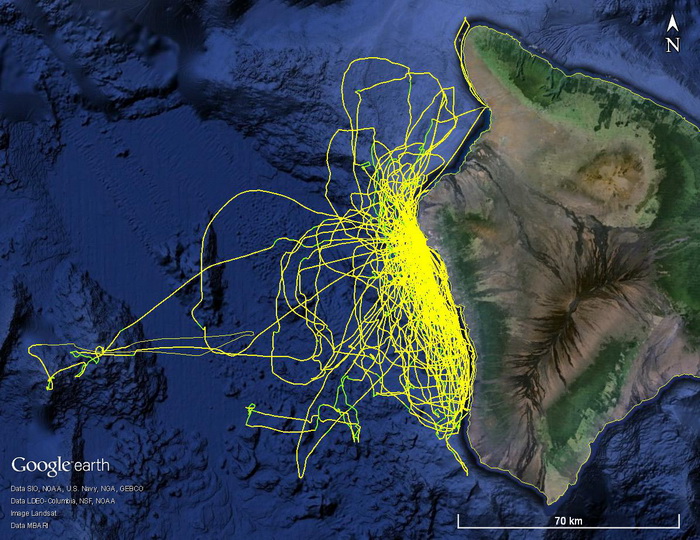 Our previous survey effort off Kona in the month of April.

Photos taken NMFS Scientific Research Permits. All photos are copyrighted and should not be used without permission (contact Robin Baird at rwbaird (at) cascadiaresearch.org for permission).
Updates from our previous field projects can be found here.

Like us on Facebook if you want to receive notices of when information is posted and updates on other Cascadia projects.